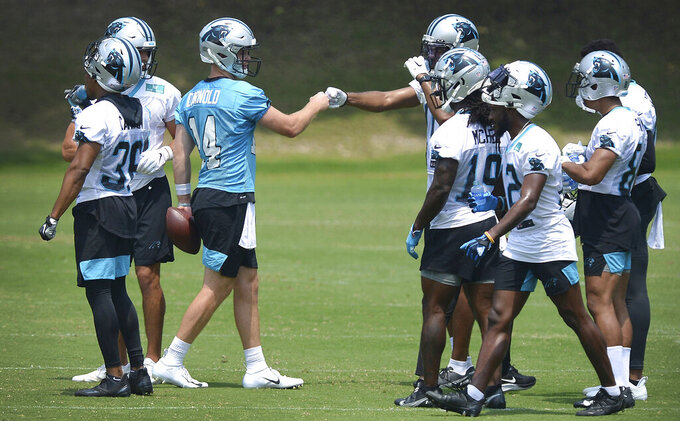 Carolina Panthers quarterback Sam Darnold (14) fists bumps the wide receivers prior to a series of drills during the team's NFL football practice on Tuesday, May 25, 2021 in Charlotte, N.C. (Jeff SIner/The Charlotte Observer via AP)

In his new Charlotte-area home he has half of a sectional couch while awaiting the second part of the delivery, and his bed remains on the floor without a frame for now.

At work, Darnold is adjusting to a new offense with the Carolina Panthers, meaning most of his free time is spent with his head buried in a several-inches thick playbook and developing relationships with new coaches and teammates.

And Darnold is loving it all.

This is a welcomed change for Darnold, who's looking to jumpstart his NFL career in Carolina after three largely forgettable seasons with the New York Jets where he went 13-25 as a starter with 45 touchdowns and 39 interceptions.

Sure, he has plenty to prove over his next two seasons under contract but for now the QB's goal is simple: “I have to keep getting reps and getting better throughout OTAs,” the 23-year-old Darnold said

“He's like any other player, he has to improve daily," Panthers coach Matt Rhule said. "That's all I ask of our guys is don't worry about the results, worry about the trajectory you are on. Are you improving daily? ... Sam is on day two right now. Sam has a lot of work to do and I'm confident he will do it.”

Rhule said the Panthers want Darnold to be more mobile in the pocket and make plays with his feet.

That’s different than what the 6-foot-3, 215-pounder endured playing with the Jets, where he was considered more of a drop-back, pocket passer.

“He comes from a different system (with the Jets) where they were kind of static, and we’re more of a move up-in-the-pocket, slide-in-the-pocket, throw-in-rhythm type of a team,” Rhule said. “We don’t really want him holding the ball. We want him to play in progression and play in timing. And that’s new to him.”

Said Darnold: “If an edge rusher comes through or someone comes unblocked I am going to try to make him miss and makes plays that way.”

Last year's starting quarterback Teddy Bridgewater held onto the ball too long in key situations resulting in costly sacks or even turnovers in late-game situations.

Bridgewater’s miscues seemed to come at the worst times, and the Panthers finished the season 5-11.

The Panthers moved on from Bridgewater shortly after acquiring Darnold in a trade with the Jets for three draft picks.

Panthers running back Christian McCaffrey said he's been impressed with what he's seen so far from Darnold. They spent time earlier this offseason working out away from the team's facility.

“He's very sharp, and I think that is something that is very exciting early on," McCaffrey said. “Obviously he is very talented and throws a great ball, but his decision-making is very good. He's smart and he knows where to go with the ball. He's confident and demands the huddle. I love how everybody is responding to his sense of urgency and him taking control of that huddle.”

Darnold said some of Carolina's plays remind him of his rookie season with the Jets, but overall he is working with a blank canvas.

Rhule said Darnold is basically “starting over” in Carolina.

But he should have more playmakers around him in Carolina with the multi-talented McCaffrey in the backfield and 1,000-yard receivers D.J. Moore and Robby Anderson at wide receiver, along with rookie Terrace Marshall from LSU.

McCaffrey gives Darnold a great check-down option if he does find trouble in the pocket.

Two years ago, McCaffrey became only the third NFL player in history to have 1,000 yards rushing and receiving in the same season. McCaffrey missed 13 games last year with various injuries but said he has no lingering injuries.

NOTE: McCaffrey considered switching to No. 5 this season — the number he wore at Stanford — but reconsidered after learning just how much it would cost him. He wouldn’t rule on a jersey number change at a later date. ... The Panthers are considering moving Jeremy Chinn to safety, but also expect him to see time at linebacker. ... Defensive end Brian Burns (shoulder) and Chinn (knee) did not participate in drills as both recover from offseason cleanup surgeries. ... Rhule said the Panthers are trying to set up joint practices with the Indianapolis Colts this summer.