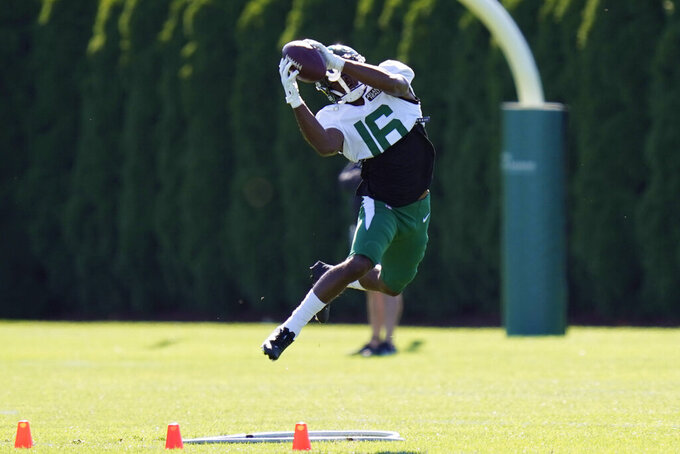 FLORHAM PARK, N.J. (AP) — Jeff Smith was a quarterback for as long as he can remember, running around would-be tacklers and tossing passes all over football fields in Florida.

He was exceptional by the time he got to high school in Clearwater, also playing wide receiver early as a dual threat on offense. Smith's tantalizing athleticism took him all the way to Boston College, where he started the final three games of his freshman year in 2015 at quarterback.

But a glut at that position the following season made Smith's spot on the depth chart uncertain. Then-coach Steve Addazio decided Smith's blazing speed — he has been clocked at 4.4 seconds in the 40-yard dash — could make him a star.

As a wide receiver.

So, Smith began a conversion that's still in progress. He's in his second training camp with the New York Jets trying to make his mark in the NFL at a position he didn't immediately embrace.

“I wanted to play quarterback,” Smith said. “I played quarterback my whole life, but it ended up being the right choice. It’s worked out so far. So it was kind of weird at first, but my transition the past two or three years I think has gone smoothly.”

Smith was a do-it-all athlete at Boston College, yet went undrafted last year. The Jets loved his athletic ability and potential at the wide receiver spot, and signed him to a free agent deal.

He flashed early last summer, but then missed most of training camp with a hamstring injury. Smith was cut after camp and signed to New York's practice squad, where he spent most of the season — until he was promoted to the active roster for the team's game at Baltimore in Week 15.

Smith had an up-and-down NFL debut, catching a 12-yard pass but also slowed down during a route on a play many thought could have been a score. Then he hurt an ankle and went on season-ending injured reserve a few days later.

“I finally got my shot, I got my first catch and made a few mistakes there, too,” Smith said. “But obviously I sprained my ankle, so that was tough. But it was a learning experience, for sure.”

Because of injuries to an already thin receiving corps, Smith has been getting some snaps with the starters during camp this summer.

“I think my main thing is just to know the whole offense,” he said. “And if my chance comes, just to be able to go in there and not think too much and just be able to play fast.”

Without preseason games because of the coronavirus pandemic, players such as Smith trying to make an impression need to do so in a big way each practice to even have a chance.

“He’s embraced it, and he’s hit it head on,” wide receivers coach Shawn Jefferson said. “He’s had some bumps in the road. ... My thing for him is when he hits adversity, what's he’s going to do?”

That's the big test Smith and the other youngsters on the roster bubble are getting daily.

“I’ve got to know before we get to Buffalo (in Week 1), whether he's going to bite,” Jefferson said. “I've got to put him through some stress for him to tell me and let me know that, hey, coach, I’m ready.”

Smith believes his quarterbacking past has helped prepare him for situations like this.

“I’ve always been able to learn things quickly and kind of retain that, so I think I kind of see things differently, like learning the whole concept,” Smith said. “I’m learning the offense with a QB’s mind, but being able to go run the routes and things like that.”

Hines Ward can relate to what Smith is going through, having played some quarterback at Georgia before primarily playing wide receiver his final two seasons and going on to an outstanding 14-year NFL career at the position. He's an offensive assistant with the Jets, focused on the receivers, and likes what he sees from Smith.

He praised the receiver's intelligence, athleticism, speed and hands. But Ward also said Smith needs to work on his body language at times and brush off mistakes.

“The potential’s there with Jeff,” Ward said. “It’s just a matter of getting some reps with the first team and getting that experience. Sometimes, being an undrafted guy, you put more pressure on yourself to go out there and perform with the first group. And sometimes it’s almost too much pressure that he puts on himself.”

Quarterback Sam Darnold has gotten in a lot of work with Smith through the first week of camp. He appreciates how the QB-turned-receiver is quickly picking things up in the offense — and making plays.

“Obviously, he has some things to work on, but he’s working on them every single day, day in and day out,” Darnold said. “He’s been really good for us and I think Jeff’s a kid that can really have an impact for us this year.”