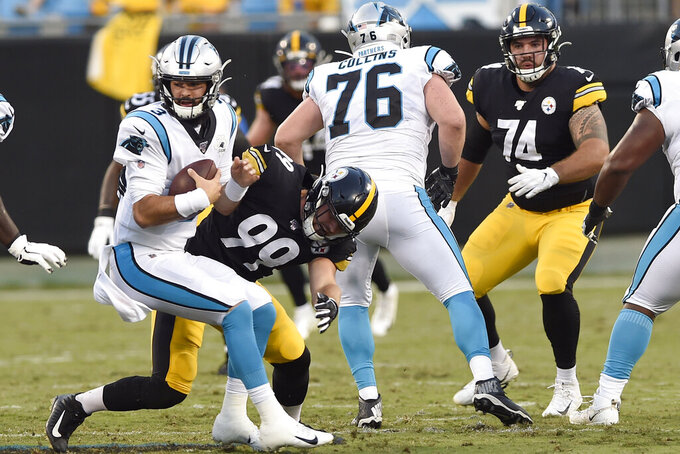 CHARLOTTE, N.C. (AP) — Mason Rudolph was all smiles as he stood in the locker room talking about his performance in the preseason.

Rudolph continued to outperform Josh Dobbs in the battle for Pittsburgh's No. 2 quarterback spot behind starter Ben Roethlisberger, completing 7 of 11 passes for 125 yards, including a 31-yard touchdown pass to Johnny Holton in Pittsburgh's 25-19 preseason loss to the Carolina Panthers on Thursday night.

The second-year quarterback from Oklahoma State led three drives resulting in a touchdown, field goal and a missed field goal to give the Steelers a 16-10 halftime lead.

Dobbs started, but both of his possessions came up empty and he finished 3 of 5 for 21 yards for the Steelers (3-1).

"That's a coaching decision, and I don't have any say in that," Rudolph said of the QB battle with Dobbs. "I tried to control what I can control during OTAs and offseason workouts and training camp. ... I tried to put my best foot forward and now we'll see what the coaches think."

Steelers coach Mike Tomlin refused to speculate on the team's depth chart, but it is clear he's been impressed with Rudolph.

"I think he has taken a significant step, not only in consistency and production but awareness and communication," Tomlin said.

Likewise, Kyle Allen appears to have locked down Carolina's No. 2 job behind Cam Newton.

Allen started three preseason games for Carolina and bounced back from a subpar performance last week against the Patriots. Allen looked sharp in his only drive, completing 4 of 6 passes for 41 yards while showing good pocket presence, escaping pressure on one play by slipping out of the backfield for a 13-yard run and a first down. The drive ended in a missed field goal.

"For me it's all about playing consistent and giving myself a chance to be where I want to be," Allen said.

Panthers coach Ron Rivera said the team will take a few days before making any decisions.

But it's fairly clear Allen is well ahead of rookie Will Grier, who played the remainder of the first half for Carolina (2-2) with mixed results. The third-round pick from West Virginia completed 11 of 18 passes for 189 yards, including a 34-yard touchdown to Aldrick Robinson. However, he also was the victim of a strip-sack by linebacker Jayrone Elliott, who returned the fumble 88 yards for a 7-0 lead. Grier continued to struggle with his decision making, tossing an interception along the right sideline.

Taylor Heinicke had a strong night completing 7 of 10 passes for 89 yards and two touchdowns, along with a 2-point conversion pass to lead Carolina's second-half comeback. Heinicke was Carolina's No. 2 quarterback last season, but is currently fourth on the depth chart this preseason.

Both teams rested their starters and many of their top reserves.

Rivera said the Panthers made Cam Newton stay at home for his own protection. He said he didn't want his franchise quarterback standing for 3 1/2 hours on the Carolina sideline while still recovering from a mid-foot sprain.

"With his enthusiasm for the game... the last thing we wanted was him running up and down the sideline and on and off the field," Rivera joked.

Newton is expected to start the Sept. 8 season opener against the Rams.

Panthers running back Reggie Bonnafon likely wrapped up a roster spot with 46 yards on three receptions, including an impressive one-handed grab over the middle that he turned into a 21-yard gain. He had 7 yards on two carries. Bonnafon is competing with Cameron Artis-Payne and rookie Jordan Scarlett for the rights to back up Christian McCaffrey.

SLYE GETS HIS KICKS

It's possible Joey Slye could be Carolina's kicker to open the season.

Graham Gano has yet to kick in the preseason due to soreness in his plant leg. Slye has made 7 of 8 field goals this preseason, including a 59-yarder in the second quarter. His only miss was a 48-yarder that was blocked due to a protection breakdown.

The Panthers had hoped Gano would be ready to kick Thursday night, but he didn't suit up.

Carolina has several options before cutdown day Saturday, including keeping both kickers, putting Gano on the eight-week injured reserve to start the season, or attempting to trade one of them.

Rivera said it would be "very tough" to keep Slye off the 53-man roster given his performance this preseason.

Steelers: visit the defending Super Bowl champion Patriots in their regular-season opener on Sept. 8. That is a Sunday night game.

Panthers: host the Rams in the regular-season opener on Sept. 8.