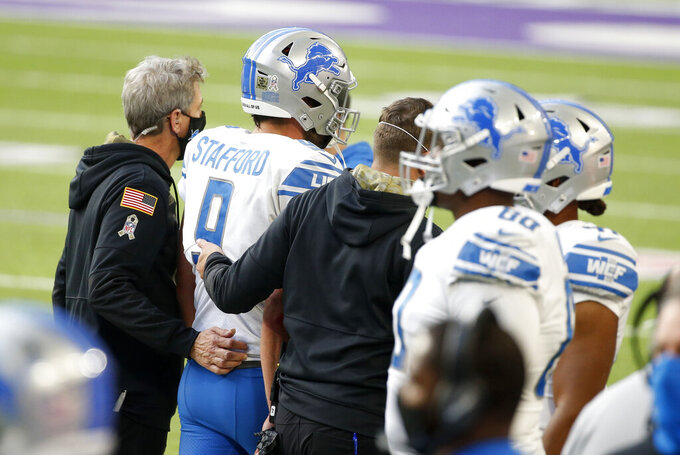 Detroit Lions quarterback Matthew Stafford (9) is helped off the field after getting injured during the second half of an NFL football game against the Minnesota Vikings, Sunday, Nov. 8, 2020, in Minneapolis. (AP Photo/Bruce Kluckhohn) 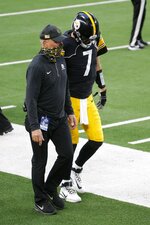 Lions quarterback Matthew Stafford left for good in the fourth quarter Sunday against Minnesota to undergo concussion protocol after being struck in the head during a sack, a mishap that capped a very difficult week for the leader of Detroit's offense.

After the game, Stafford was cleared of concussion protocol.

Officials sent Stafford to the sideline after he was slow to get up from being hit by Eric Wilson and Armon Watts. Chase Daniel took over for the Lions, and Stafford was eventually walked to the locker room by two team doctors.

Stafford went 23 for 32 for 211 yards with a touchdown and two second-half interceptions in Detroit's 34-20 loss.

The frustrating exit ended a week in which Stafford wasn’t allowed to practice before coming off the COVID-19 reserve list on Saturday. After a sharp first half, Stafford threw picks on consecutive possessions in the third quarter -- at the Minnesota 12-yard line and again in the end zone.

Coach Matt Patricia backed the decision to have his quarterback removed from the game.

“Make sure he was OK. That’s first and foremost," Patricia said. “That’s the most important thing, and then they evaluated him from there.”

Stafford wasn't the only quarterback to make an early exit because of injury. Washington's Kyle Allen dislocated his left ankle late in the first quarter against the New York Giants, forcing Alex Smith into just his second NFL game since gruesomely breaking his right leg in November 2018.

Allen’s leg bent the wrong way on a sack by Jabrill Peppers, who was flagged for unnecessary roughness, and there was an air cast on the quarterback's leg as he was carted off. Washington lost 23-20, even though Smith directed a couple of a second-half touchdown drives.

“Obviously, a ton of emotions going on for me right there,” Smith said. “I see them with the air cast and the cart. I know that routine well.”

In Indianapolis, the Baltimore Ravens lost five-time Pro Bowl defensive end Calais Campbell to a left calf injury in the first quarter of a 24-10 win over the Colts. Campbell was left on his back following the play and limped off the field. He did not return.

Coach John Harbaugh said the injury was a calf strain, adding, “It's not serious."

Campbell has been a star on the Baltimore defense since coming over in an offseason trade with Jacksonville.

It was a tough day for tight ends. Denver's Albert Okwuegbunam left with a knee injury suffered in the second half against Atlanta and did not return.

Indianapolis Pro Bowl tight end Jack Doyle left for good late in the first half with a concussion. The Colts were already without four-time Pro Bowl receiver T.Y. Hilton, who was inactive because of a groin injury he suffered in last week’s win at Detroit.

In addition, Titans tight end MyCole Pruitt hurt his right knee late in the first quarter against Chicago and had to be helped off the field. Tennessee won, 24-17.

Other Titans injuries in that game included guard Rodger Saffold, who hurt a shoulder in the second quarter and went to the locker room, and defensive back Dane Cruikshank (groin).

The Texans beat the Jaguars 27-25 despite being short-handed on defense. Already without three linebackers to start the game, Houston lost Brennan Scarlett in the first quarter when he injured his arm. Texans LBs Whitney Mercilus, Jacob Martin and Dylan Cole did not make the trip to Florida because of COVID-19 testing and contact tracing.

Steelers QB Ben Roethlisberger went to the locker room after throwing a first-half touchdown pass, bothered by a left knee injury. Mason Rudolph had to replace him when rookie Dallas receiver CeeDee fumbled after a catch. But Roethlisberger returned in the second half and led the Steelers to the win.

The Cowboys didn't even make it to the opening kickoff before losing a player in their game against Pittsburgh. Joe Looney replaced Tyler Biadasz at center after the rookie injured his hamstring during warmups. Biadasz previously got the starting job after Looney was forced out for three weeks with a knee injury.

The Chargers played most of their game against Las Vegas without running back Justin Jackson, who sustained a knee injury in the first quarter. Jackson was coming off an 89-yard rushing performance against Denver.