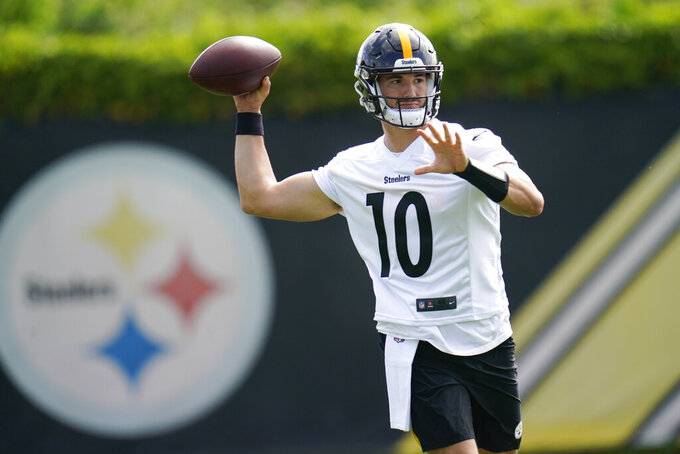 FILE - Pittsburgh Steelers quarterback Mitch Trubisky participates in drills during an NFL football practice in Pittsburgh, Pa., on Tuesday, May 24, 2022. The Steelers enter training camp with the starting quarterback job up for grabs for the first time in nearly 20 years following Ben Roethlisberger's retirement in January. (AP Photo/Keith Srakocic, File)

LAST YEAR: The Steelers reached the playoffs in QB Ben Roethlisberger's final season, getting there with a mostly smoke and mirrors approach. The Steelers were 8-2-1 in one-score games and 1-5 when the margin was nine points or more. They were outclassed in the playoffs, getting blown out in Kansas City in Roethlisberger's final game. While the defense struggled against the run — finishing last — linebacker T.J. Watt looked worth every penny of his record-setting contract, winning NFL Defensive Player of the Year after racking up an NFL-record tying 22 1/2 sacks. Rookie running back Najee Harris was every bit as good as advertised, rolling up 1,667 total yards and 10 touchdowns. The passing game, however, was pedestrian most of the season and the inability to consistently get the ball downfield because of protection issues and a decline in Roethlisberger's accuracy when going deep combined to make Pittsburgh predictable and often overmatched against quality opponents.

CAMP NEEDS: The Steelers return to Saint Vincent College for the first time since 2019 this summer, and head to camp with a question mark at quarterback for the first time in a generation following Roethlisberger's retirement. Perhaps even bigger than who the starter is will be cohesion in the trenches on both sides of the ball. The offensive line has been revamped for the second time in as many seasons with the arrival of Daniel and Cole and the defensive line is hoping a fully recovered Tyson Alualu plus the late addition of Ogunjobi will give perennial Pro Bowler Cam Heyward some needed help.

KEY CAMP COMPETITIONS: The three-way duel — for now — between Trubisky, Pickett and Mason Rudolph will dominate the conversation throughout August. Trubisky worked almost exclusively with the starters during organized team activities and minicamp, meaning if he's going to be unseated, he's going to have to be outplayed by a considerable margin. There are few other truly vacant jobs up for grabs, though Ogunjobi — if healthy — could be in line to take the majority of snaps at defensive tackle, which would let Alualu be more of a rotational player at age 35.

EXPECTATIONS: There's a sense offensive coordinator Matt Canada met Roethlisberger in the middle last season in terms of what the offense would look like. Expect Canada to add several new wrinkles now that he has a couple of quarterbacks that — while lacking Roethlisberger's resume — will be able to make plays outside of the pocket. The addition of Flores, who was fired by the Dolphins in January and then filed a class-action suit against the NFL for what he alleges are racist hiring practices, gives head coach Mike Tomlin another brain to pick as he and first-year defensive coordinator Teryl Austin try to restore a bit of toughness to a defense that was pushed around at times.