Quinn finds plenty to like in win, but job status unchanged 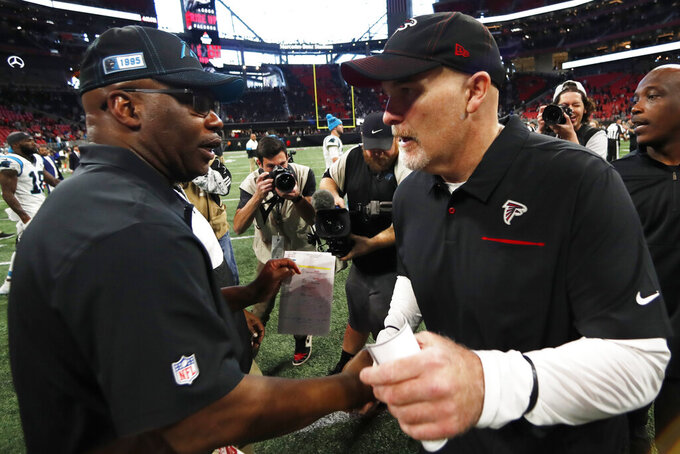 FLOWERY BRANCH, Ga. (AP) — With his job status in limbo, Falcons coach Dan Quinn has no choice but to move ahead as if he will be back next year.

That's an unlikely scenario, though.

Atlanta's 40-20 victory over Carolina on Sunday means only that the players haven't quit playing for him, but Quinn's team is 4-9 this year and was 4-9 last year before winning its last three.

What matters is that Atlanta is out of the playoffs for the second straight season, and that reality doesn't sit well with owner Arthur Blank, who had hoped last season was an aberration due to injuries and wouldn't happen again.

Whoever is coaching the team in 2020 can look back on the season's second victory over the Panthers as a rare highlight. Quinn liked how the Falcons complemented each other in all three phases.

After a sluggish first half that ended with a three-point lead, Atlanta got cranked up in the third quarter. Vic Beasley sacked Kyle Allen on the third snap of the period and knocked the ball out for Tyeler Davison to recover. The Falcons led 20-10 five plays later on Devonta Freeman's 13-yard touchdown run.

Following the longest TD pass of Matt Ryan's career, kicker Younghoe Koo recovered a fumble at the Carolina 19. It was a perfect chance for Koo to recover his own kickoff when Damontae Kazee punched the ball loose from Greg Dortch. Koo's short field goal four snaps later made it 30-10.

The third quarter ended with Kazee intercepting Allen for a second time.

“You saw that last night — protecting the quarterback, run game, play pass, defensively creating turnovers and winning field position," Quinn said Monday. “There was great energy in all three phases, and that's the thing that leads to that complementary football. I thought when you have that kind of stuff, that's when you're able to play your best."

Ryan, the 2016 NFL MVP, began the game having been sacked 15 times the previous two weeks. He went down just once against Carolina and had plenty of time to find receivers. Rookie right guard Chris Lindstrom, the league's No. 14 overall draft pick, returned from a foot injury for the first time since the season opener and played 36 snaps. Quinn said that number will go up this week.

The Falcons rushed for a season-best 159 yards, but still rank 30th with a paltry 80.8 average. They had plenty of chances to run the ball with a big lead in the second half. That has hardly been the case most of the year with the team playing from behind.

Kazee showed what he could do last year, tying for the NFL lead with seven picks. He was hard to defend on defense and special teams Sunday and will have plenty of chances to resume his pace with three games remaining. The Falcons visit NFC West-leading San Francisco this weekend.

Punter Matt Bosher was placed on season-ending injured reserve last week, his second stint on shelf with a groin strain, and it's uncertain how long it will take him to recover. This is the final year of Bosher's contract, so he might not return for a 10th season with Atlanta. He played in just three games this year after missing just one game in his career.

Wide receiver Calvin Ridley (abdominal strain) and cornerback Desmond Trufant (broken forearm) were injured in the game and are out for the rest of the season. Left guard Wes Schweitzer left with a shoulder injury and was replaced by John Wetzel.

Minus-7 — That 's what Atlanta is in turnover margin. The Falcons were plus-4 against the Panthers, but still rank sixth-worst in the NFL.

Blank will continue to assess which way to turn for a coach and likely a new general manager next year. GM Thomas Dimitroff likely bears as much blame on the last two years as Quinn.