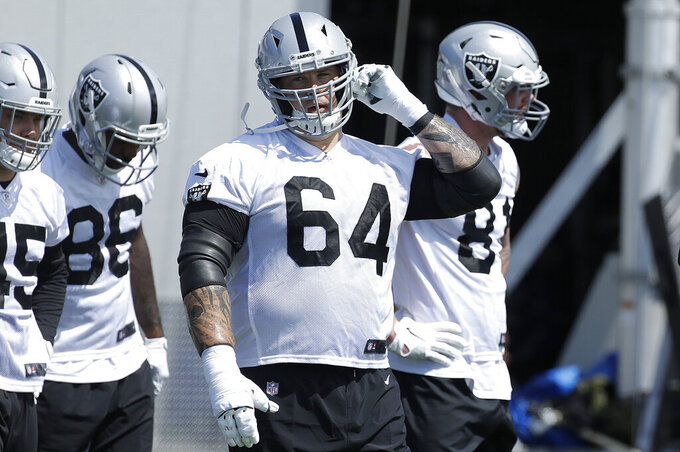 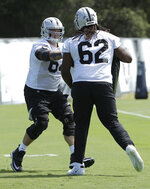 ALAMEDA, Calif. (AP) — Throughout the draft process, Oakland Raiders general manager Mike Mayock and coach Jon Gruden stressed the importance of character when looking for players who could help turn the franchise around.

When it comes to veterans, the Raiders have been much more willing to take chances.

The latest potentially risky acquisition came on Tuesday when the Raiders signed troubled former Pro Bowl guard Richie Incognito to a one-year contract despite a history that includes a suspension for bullying, run-ins with law enforcement and the potential for another suspension from the NFL.

"At the end of the day, you can't have all Boy Scouts," Mayock said. "You have to do your homework on each individual case. We've done our homework. We've talked to an awful lot of people. ... We've talked to Richie. We've told Richie what we expect both on and off the field and we expect him to adhere to that."

Incognito, who turns 36 in July, has played 11 years in the NFL, making the Pro Bowl four times, and immediately becomes the leading contender to start at left guard in Oakland.

But he comes with significant baggage, including multiple suspensions in college, the ban for bullying in Miami in 2013, allegations that he made racist slurs to an opponent during a playoff game in January 2018 and two run-ins with police since he retired following the 2017 season.

Incognito pleaded guilty last month to disorderly conduct in Scottsdale, Arizona, after being accused of threatening employees at a funeral home where his father's body was being held. He could face a suspension from the NFL over his conduct.

"We've talked to the NFL, we've stayed in touch with them," Mayock said. "There's a chance there could be league discipline. Don't know what it will be. It's a one-year, minimum prove-it deal and we feel that he's incented properly to stay straight and we don't know what the NFL will do."

Incognito fills a big hole on Oakland's offensive line after Kelechi Osemele was traded to the New York Jets in the offseason. Denzelle Good had been working at left guard, but the Raiders wanted a more proven option and began talking with Incognito earlier this offseason.

He visited the team facility and took a physical early in May but didn't sign until Tuesday.

"He's just a really tough football player," said offensive coordinator Greg Olson, who worked with Incognito in St. Louis. "He brings a tough demeanor to the room and the offensive side of the ball. Very talented as well."

In his final game before retirement, Incognito was accused by Jacksonville defensive end Yannick Ngakoue of making racist slurs during the Jaguars' 10-3 win over Buffalo in an AFC wild-card playoff game. The NFL looked into the charges but never announced a decision on any punishment. Ngakoue said he and Incognito cleared the air after they were AFC teammates at the Pro Bowl later that month.

In May 2018, police in South Florida placed Incognito in a mental hospital after he allegedly threw weights and tennis balls at gym employees and another patron, and told officers the government was spying on him.

Incognito was arrested in August 2018 in Arizona on charges he threatened to shoot employees of a funeral home. A police report showed officers later executed a search warrant on Incognito's pickup truck and seized two Glocks, three rifles and a silencer for a handgun.

He pleaded to disorderly conduct in that case in April.

A person with direct knowledge of the situation told The Associated Press that security was stepped up at the Bills headquarters around the time Incognito announced his retirement on social media. Though he wasn't entirely barred from the facility, security personnel were placed on alert if Incognito arrived, the person said, speaking to the AP on condition of anonymity because the person was not authorized to speak publicly.

Incognito also was suspended for the final eight games of the 2013 season, when the Dolphins were thrust into the national spotlight after Jonathan Martin abruptly quit the team amid accusations he was being bullied. An NFL investigation determined Incognito and two other Dolphins offensive linemen persistently harassed Martin.

Incognito also played three-plus seasons in St. Louis, which drafted him in 2005. He played in college at Nebraska but left after being suspended twice, then transferred to Oregon, though he never played for the Ducks.

Incognito earned three of his four Pro Bowl selections in Buffalo and was considered among the Bills' team leaders. He started all 36 games at left guard for the Bills and was part of a line that led to Buffalo leading the NFL in yards rushing in both 2015 and '16.

Now he will try to help the Raiders.

"Incognito is a great guy, super funny, really good personality," receiver Antonio Brown said. "Aggressive guy who loves the game of football. I think he's coming in hungry and excited to be back out here."

The Raiders released guard Chaz Green to make room on the roster.