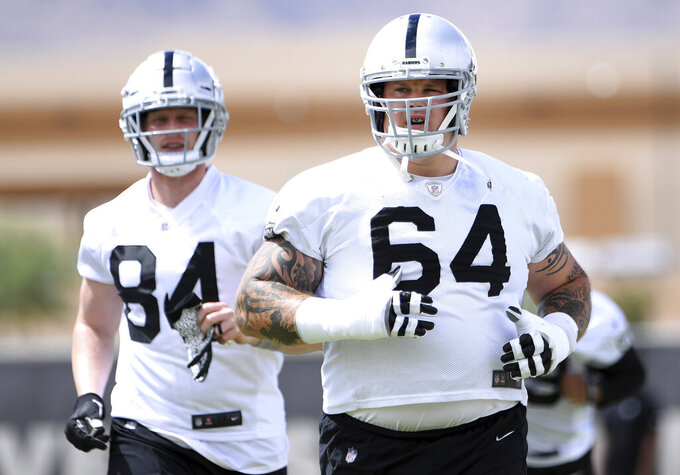 With veteran center Rodney Hudson, guard Gabe Jackson and tackle Trent Brown shipped elsewhere during the offseason, Incognito, who recently signed a one-year contract to return to the Las Vegas Raiders, will be relied upon to mentor and guide younger players.

“It’s great to be able to have been here for a couple of years and be established and be a leader for these young guys,” Incognito said. “It’s great because we have some really good experience in the room. It’s my job to keep those guys going, keep ’em hungry, keep ’em humble. And when we get out on Sunday, just play as one and go out there and really get after people.”

Incognito is eager to return after missing the 2020 season with an Achilles tendon injury that required surgery. His rehab has him feeling 10 years younger than the man who will turn 38 in July and who looked as agile as his younger linemates during the first two days of voluntary workouts at the team’s practice facility.

“A lot of things can get misconstrued about Richie," Raiders defensive end Clelin Ferrell said Wednesday. "I mean, yeah, he is a little crazy. But at the same time, you would never know because he’s such a disciplined and good dude. ... A lot of guys would complain. He comes out to practice all the time, he don’t take no days off unless coach makes him take days off.

“He’s gonna really be that vocal leader for sure. They got a dog on there.”

Working with offensive line coach Tom Cable has helped relieve some of the pressure for Incognito, while standards have been set high for a front line that needs to protect quarterback Derek Carr in an offense that finished seventh in the NFL with 4,217 yards passing in 2020.

Incognito said Cable’s expectations for a physical offensive line suit him, considering he sets the tempo with a raucous approach every day in practice, hoping his energy becomes contagious.

One of his first orders of business is to work with 24-year-old center Andre James and first-round pick Alex Leatherwood out of Alabama. Incognito described both as hard workers with a lot of enthusiasm to learn and improve.

It doesn’t hurt that Incognito, who has played with four franchises, has put in his own work the past six-plus months after surgery and set an example for what it takes to start.

“He’s a big positive influence around the building,” defensive end Maxx Crosby said. “The guy’s been in it for 17 years playing offensive line, honestly unheard of. He’s a leader. He loves football and the guy looks like he is 25 years old. It honestly doesn’t make any sense.”

Maybe not, but Incognito is defying the odds that say he should be watching football rather than playing, after a diverse training regimen that has built his conditioning, helped with his footwork and ignited his explosiveness.

“It’s honestly just staying and feeling young,” Incognito said. “One of the keys to my success is still being able to move around. The injury was frustrating, but I knew from the start I was coming back.”

Incognito’s bond with his teammates was evident on the second day of workouts. He joked between reps with the offensive linemen, sparking the chemistry that is important to him heading into the season.

“We’re a young team, we’re learning a new defense, offense. We’re trying to sharpen our tools to be more productive, put up more points, put more pressure on teams,” Incognito said. "I think we have a bunch of sharp guys, we got a bunch of hard-working guys, and now is the time to lay the foundation for training camp. It’s great for team building to be around the guys.”