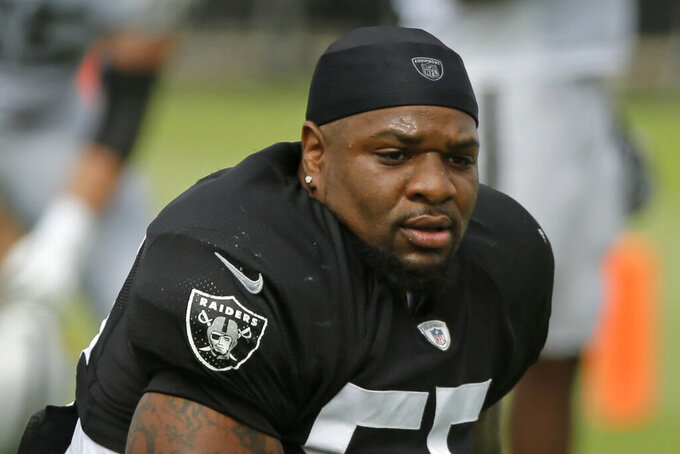 ALAMEDA, Calif. (AP) — Oakland defensive coordinator Paul Guenther lashed out at the NFL for the lengthy suspension the league handed to Raiders linebacker Vontaze Burfict for a helmet-to-helmet hit, one of a series of violations for which he has been punished.

Burfict was suspended for the final 12 games of the regular season and the playoffs for the hit to the head of Indianapolis tight end Jack Doyle on Sept. 29. It was longest suspension ever handed down by the league for an on-field infraction.

Burfict appealed the penalty hoping to get it reduced but that was denied last week by appeals officer Derrick Brooks. The previous longest suspension was five games handed to Tennessee's Albert Haynesworth in 2006 for kicking and stomping on Cowboys center Andre Gurode's face, leading to 30 stitches.

"I think it was a witch hunt from the beginning quite honestly," Guenther said Thursday. "Somebody at the league didn't want him playing football and they got what they wanted."

NFL Vice President of Football Operations Jon Runyan handed down the penalty to punish Burfict severely for "repeated violations of unnecessary roughness rules" after the hit on Doyle. It was the third time Burfict has been suspended for a dangerous hit on the field to go along with several others that led to fines.

Guenther said he's most upset about the lack of a clear standard and that he and the team will keep a close eye on other infractions to see if they are dealt with the same way.

"Now they've opened up a whole can or worms as far as the next guy who is going to do this," he said. "We have to make sure if we do this to this one guy, this one guy driving 38 miles per hour in a 30 mile per hour zone, a cop looking for one guy doing it, then all the players should be held to the same one standard. To me that's where I have the issue."

During his time in Cincinnati, Burfict was repeatedly suspended by the NFL for egregious hits and violating its policy on performance-enhancers. He was fined regularly for hits that crossed the line, most notably the one to Antonio Brown's head that helped the Steelers rally for an 18-16 playoff win in the 2015 season. That led to a three-game suspension to start the 2016 season.

Burfict then was penalized with a five-game suspension for a blind-side block against Kansas City fullback Anthony Sherman in the 2017 preseason. The suspension was later reduced to three games.

But it was that history that led to this punishment, with Runyan telling Burfict in a letter that he "continued to flagrantly abuse rules designated to protect yourself and your opponents from unnecessary risk."

"Does it make any sense to sign a guy if after one infraction he's going to get thrown out of the league for a year? No, it doesn't," Guenther said. "I think it's very unfair. It's unfair to our team and unfair to Vontaze."