Raiders' defense steps up to challenge during 3-game streak 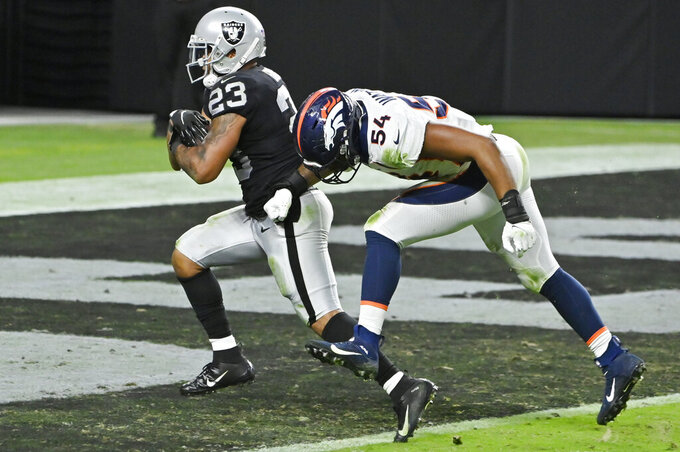 LAS VEGAS (AP) — Coach Jon Gruden challenged the Las Vegas defense a few weeks ago after it was picked apart for 45 points in a loss to Tom Brady and Tampa Bay.

The unit has responded the past three weeks and is a big part of the team’s three-game winning steak that has the Raiders in the thick of the AFC playoff race headed into a showdown against Kansas City.

The Raiders intercepted four passes, recovered one fumble, and completely flummoxed Drew Lock in a 37-12 victory on Sunday over the Denver Broncos.

“Them boys went crazy,” running back Josh Jacobs said. “It was fun celebrating them doing good and just seeing them make plays. You just see them have fun and flying around and not think too much. So hopefully we can translate that into next week.”

Las Vegas held Cleveland to six points in a bad-weather game in Week 8, made a stop in the end zone at the end of a win over the Chargers last week, and then delivered one of the franchise’s best defensive performances in years against the Broncos.

The Raiders had their first four-interception game since 2008 and first game with five takeaways in seven years. A much-maligned group in recent years is starting to perform better.

Over the past three weeks, the Raiders rank in the top five in takeaways (7), passer rating against (68.1) and points allowed (14.7 per game).

“We didn’t make any huge changes,” safety Jeff Heath said. “I think we know the plan a little bit, but really, we’re just playing better. It’s just what it comes down to. It’s not about the plan, it’s not about who we're playing, it’s not about the conditions. You got to play good, you just got to do your job. Play in and play out for the entire game.”

Penalties. The Raiders have cleaned up their penalties this season but had a few costly ones against the Broncos that could end up hurting against better teams. They matched a season high with penalties for a high of 82 yards. Three were particularly costly. Keisean Nixon was called for a hold that wiped out a 29-yard punt return by Hunter Renfrow in the first quarter. Johnathan Abram’s blind-side block negated a 60-yard punt return TD by Renfrow in the second quarter. Left tackle Brandon Parker was called for a hold on a fourth-and-1 that led to a punt.

Jeff Heath. An overlooked addition, Heath delivered his biggest performance of the season. He had an interception on Denver’s third drive and then made back-to-back big plays at the end of the half. He drew a holding call against Noah Fant in the end zone to wipe out a last-minute TD run by Drew Lock. Heath then intercepted a pass on the next play to send the Raiders into the half with a 10-6 lead. Heath leads the team with three INTs on the season.

Darren Waller. Waller was held to three catches for 37 yards and had an egregious drop on a deep throw from Derek Carr that could have gone for a TD. Waller has been held to 50 yards or fewer in five straight games and is averaging only 8.1 yards per reception this season.

RB Jalen Richard has a bruised sternum and is day to day .... LT Kolton Miller and DT Maurice Hurst tested out their sprained ankles that have sidelined them the past two games and Gruden said the signs were positive.

The Raiders host Kansas City on Sunday night looking for first season sweep vs. the Chiefs since 2012.