Raiders draft playmakers with 1st 2 picks in third round 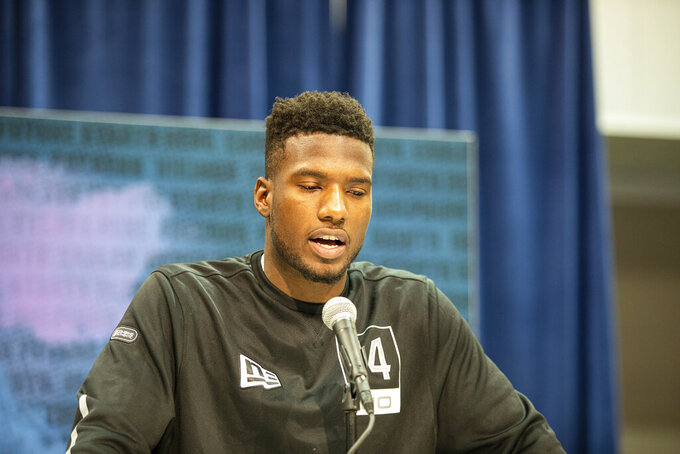 Bryan Edwards talks to the media at the NFL Scouting Combine on Tuesday, Feb. 25, 2020 in Indianapolis. (Detroit Lions via AP)

They spent the first two days of the draft trying to do just that.

After drafting the fastest player available in the first round with receiver Henry Ruggs, the Raiders spent their first two picks on day two of the NFL draft Friday night on playmakers Lynn Bowden Jr. and Bryan Edwards.

The Raiders took former Kentucky slot receiver and quarterback Bowden 80th overall with their own pick and plan to make him a running back. They then used a third-rounder acquired in last year’s trade that sent Khalil Mack to Chicago to draft South Carolina receiver Edwards at No. 81.

The two will team with Ruggs, who was taken 12th overall on Thursday, to help overhaul the offense.

The Raiders traded down with their third pick in the third round, moving from 91 to 100 before taking Clemson linebacker Tanner Muse. The Raiders got picks No. 100, 139 and 172 from New England and also sent the 159th pick to the Patriots.

The Raiders wideouts ranked 30th in the league in receptions (145) and 29th in yards receiving (1,858) with fifth-round rookie slot receiver Hunter Renfrow catching the most passes with 49.

Tyrell Williams is also back after struggling most of last season with injured feet, along with free agent acquisition Nelson Agholor.

Bowden is a dynamic player who was used mostly in the slot in college before moving to quarterback midway through last season. He ran for 1,486 yards and 13 TDs, averaging 7.9 yards per carry last season, and was a first-team All-American as an all-purpose player.

“Whatever they need me to play,” Bowden said. "I’m not set on one position. I’m trying win as many games as we can, get the championship. Wherever Coach Gruden wants me to play, that’s where I’m going to play.”

Edwards had 71 catches for 816 yards and six TDs last season, but 36 of those receptions came on screen passes, according to Pro Football Focus.

“I feel like I'm a playmaker,” Edwards said. “I feel like I can make plays with the ball in my hands, I can get 50-50 balls and help the team win.”

Muse played mostly safety in college but projects to be a linebacker in the pros. He aims to be a “special teams war daddy” at the start, while he learns to pay linebacker. Muse had seven interceptions and 14 pass breakups in college.

Muse is the fourth Clemson player drafted by the Raiders in the past two years, joining Renfrow, Clelin Ferrell and Trayvon Mullen.

The Raiders also took cornerback Damon Arnette with the 19th pick on Thursday.

The Raiders have two fourth-round picks and one in the fifth round on Saturday.