Raiders far from playoffs after record number of blown leads 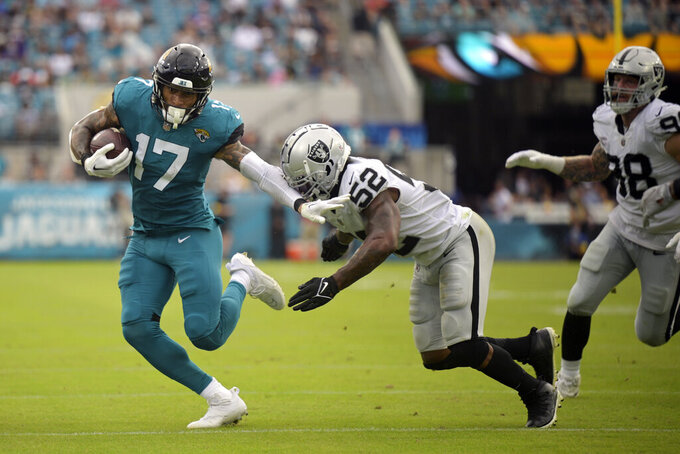 HENDERSON, Nev. (AP) — Las Vegas first-year coach Josh McDaniels spoke at training camp about learning “how not to lose," but at the season's midway point, the Raiders have found creative ways to come up short.

At 2-6 after back-to-back losses at the New Orleans Saints and Jacksonville Jaguars — teams that are a combined 6-11 — the Raiders are nowhere near the playoffs, and McDaniels is facing tremendous heat from a fan base that isn't shy about bringing up his 11-17 record more than a decade ago with the Denver Broncos.

Even his own locker room is on edge, with receiver Davante Adams saying after Sunday's 27-20 loss to the Jaguars that the play-calling strayed away from what worked earlier in the game and quarterback Derek Carr saying serious internal discussions needed to take place.

“There's only one way to get through this, and that's to work hard and earn the right to win.”

As far as what changes McDaniels might make, he indicated not to expect anything dramatic.

“We're going to try to figure out what we need to do to shift the results," he said. “Some of those things might be very minor. If you change the result of four plays yesterday, it probably changes the game, and that’s how every game is when it’s that tight. I definitely am not going to go in there and panic and say we need to uproot everything we’ve done.”

The offense is McDaniels' specialty, as his three Super Bowl rings coordinating New England's offense — among his six overall with the Patriots — would suggest. But even with Adams at receiver, the Raiders are in the middle of the pack in scoring offense, averaging 22.9 points a game, not much different from last season's 21.8 figure.

Their larger issue has been on defense, which wasn't good when McDaniels and his staff inherited it. The Raiders are 28th in the NFL in allowing 25.1 points a game, in the neighborhood of the 25.8-point average they surrendered last season.

The difference, as McDaniels said, comes down to a handful of plays. Las Vegas made those plays last season, winning its final four games by a combined 12 points to make the playoffs.

This year's team has lost three times after leading by at least 17, tying the NFL record also held by the 2020 Chargers and 2003 Falcons.

Las Vegas is 1-3 under McDaniels when leading by that margin.

“I always think there’s areas that I could do better in,” he said. “I’ve stood up here before and said I’ve never called a perfect game, and I probably never will. I think there’s a lot of things that go into that.”

Defensive end Maxx Crosby. He continues to be the Raiders' most consistent player, recording a fumble recovery and a tackle for a loss against the Jaguars. His 13 tackles for loss is tied for the NFL lead with Minnesota's Za'Darius Smith, and his 47 total tackles is second among defensive linemen, one behind Indianapolis' Grover Stewart.

The ability to adjust to unexpected developments. It's hard to discredit McDaniels' game plans, which have led to the Raiders jumping out to early leads. The problem is when both teams go off script, and Raiders opponents have done a much better job of making halftime and in-game adjustments.

Running back Josh Jacobs. The Raiders were at their best when they relied on Jacobs. He rushed for at least 143 yards in three consecutive games as Las Vegas went 2-1, including a one-point loss at AFC West leader Kansas City. Jacobs also received at least 20 carries in each of those games, but didn't crack that total in the past two losses. It was curious that Jacobs didn't get more carries in the second half against the Jaguars when the Raiders had a big lead.

Defensive end Chandler Jones. He was brought in from Arizona to bookend the pass rush with Crosby, but he's been nearly a nonfactor with only half a sack. Jones had 10 1/2 sacks last season.

TE Darren Waller has missed three games in a row with an injured hamstring. LB Divine Deablo injured a forearm against the Jaguars and was placed on injured reserve on Monday. To fill Deablo's roster spot, the Raiders signed free agent C Sidney Jones IV.

15 — Raiders opponents have scored touchdowns all 15 times in goal-to-go situations.

The Raiders make a rare home appearance this weekend against the struggling Indianapolis Colts, who fired coach Frank Reich on Monday. This is Las Vegas' only home game during a five-week stretch.