Raiders focus on coaches' grades rather than other resources 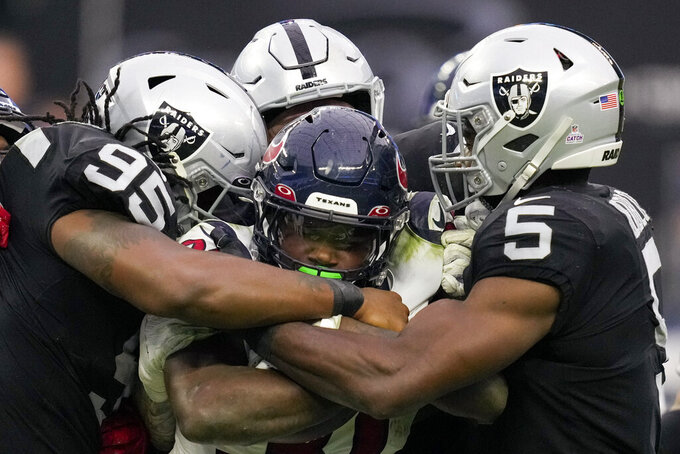 Houston Texans running back Dameon Pierce, center, is brought down by Las Vegas Raiders defensive tackle Kendal Vickers (95), linebacker Divine Deablo (5) and others during the second half of an NFL football game Sunday, Oct. 23, 2022, in Las Vegas. (AP Photo/John Locher)

HENDERSON, Nev. (AP) — Last year and at the start of this season, Las Vegas Raiders second-year linebacker Divine Deablo used to focus on analytical websites, paying attention to his grades.

“When I noticed they didn’t realize what we were actually running — like I’m dropping to the boundary, they catch it to the field, and they blame that on me — I’m like ‘OK I gotta stop paying attention to these grades, and just play ball and whatever coaches say just listen to them,’” he said. ‘The coaches put you on the field, they expect you to play at a certain level.”

A level Deablo is living up to.

While Deablo ranks 55th out of 79 linebackers on Pro Football Focus’ grading scale, he’s ranked first on the Raiders, and 15th in the league, with 59 combo tackles, and second with 29 solo tackles.

For veterans like linebacker Denzel Perryman and Duron Harmon, they, too, paid attention at the start of their careers, but quickly learned analytics and grades outside the organization don’t amount to much, or, at least not as much as what their coaches say.

“If you really pay attention to that type of stuff, then you’ll kind of drive yourself crazy,” said Perryman, an eight-year veteran who's tied for fifth on the Raiders with 17 solo stops and ranks 17th on PFF’s linebacker scale. “Unless people know the actual scheme, they know a playbook, they know a play you called, they know everything ... you can get caught up into it.

“My coaches grade me, my defensive coordinator grades me, my head coach grades me — I take those grades seriously.”

Harmon reiterated Perryman’s point, saying all he is concerned with is doing what the coaches are asking him to do.

“What is my job? Am I doing that to the best of my ability, and if I’m doing that, that’s all that matters,” added Harmon, who ranks eighth out of 87 safeties at PFF.

One of the better examples with the Raiders might be safety Johnathan Abram, who Pro Football Focus ranks 77th out of 87, but who leads the team with 30 solo tackles, has 40 total, and has registered two quarterback hits. While Abram may not grade out spectacularly with his direct involvement in specific coverages grading sites are looking at, there are aspects of his game not being graded, like forcing quarterbacks to spend more time with their passing progressions.

As a unit, the offensive line came into the season ranked 28th, was at 25 a week ago, and is up to 20th this week. The steady progression is clearly bolstered by PFF’s No. 1-ranked running back, Josh Jacobs, who’s rushed for 633 yards, third-best in the league.

“To be honest, I think it’s only for show,” said rookie offensive tackle Thayer Munford, the 63rd-ranked offensive tackle, out of 77. “We all know that we can be better and we all strive to be the greatest. Everybody on the offensive line in the NFL wants to be the greatest. But we take (our job) personally to make sure that Josh and (quarterback) Derek (Carr) get the yards that they deserve. We take pride in that.”

Raiders coach Josh McDaniels said he and his coaching staff grade every practice and every game film, and that includes the intent of every play or the design of the scheme. At the end of the week, after every game, each player has a grade.

Outside of using data from other resources, especially if they’re in a pinch or during free agency, McDaniels said they put their trust in what they see and their own grades based on practice and the game.

“They know where they stand relative to assignment, whether it’s the finish of the play, the effort, the technique that they use,” McDaniels said. “We grade all those different factors in the game. And then we coach him on Monday and try to improve as much as we can, as best we can throughout the season.”