Raiders GM Mike Mayock: 'We need to be a playoff team' 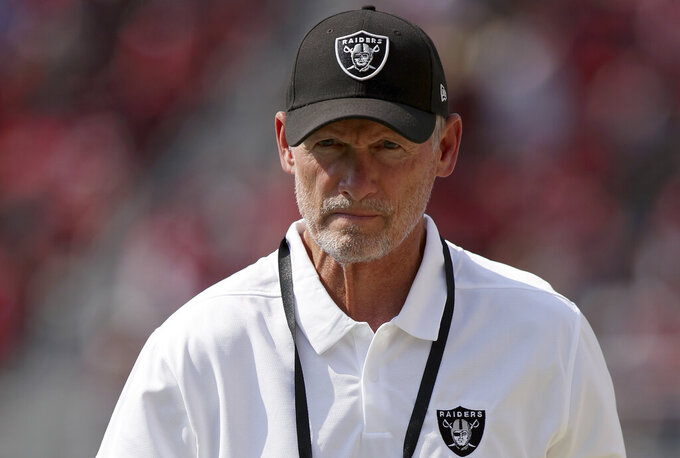 FILE - In this Aug. 29, 2021, file photo, Las Vegas Raiders general manager Mike Mayock walks on the sideline during at the team's NFL football game against the San Francisco 49ers in Santa Clara, Calif. After failing to post a winning record in three seasons since Jon Gruden returned as coach, the Raiders know that nothing short of a playoff berth can be considered a success in year four. “We think we’re going to be a pretty good football team,” Mayock said Wednesday, Sept. 1. "We’re not hiding from expectations." (AP Photo/Scot Tucker, File)

There is no more time for excuses from the Las Vegas Raiders.

After failing to post a winning record in three seasons since Jon Gruden returned as coach, the Raiders know that nothing short of a playoff berth can be considered a success in year four.

“We think we’re going to be a pretty good football team,” general manager Mike Mayock said Wednesday. “We’re not hiding from expectations. I think Jon and I will both tell you that we feel like we need to be a playoff team this year, and I don’t think there’s any doubt about that. You guys are all going to put that in your headlines, and I understand it. That’s what the expectation is. We think we’ve done the infrastructure work necessary to put us in position, and we got to take care of business.”

The Raiders haven’t taken care of business since Gruden returned in 2018. He took over a franchise that had most of the key pieces still in place from a team that went 12-4 in 2016 for the Raiders’ only playoff berth in the past 18 seasons.

But Gruden spent his first year tearing down the roster rather that tweaking it, trading stars Khalil Mack and Amari Cooper for draft picks during a 4-12 season.

What followed was a free-agent spending spree in the final season in Oakland with the Raiders handing out big deals to tackle Trent Brown, receiver Tyrell Williams and defensive back Lamarcus Joyner, as well as trading for temperamental receiver Antonio Brown.

The Raiders cut Antonio Brown before he even played a game for the team and the other additions struggled to stay or be effective. After a promising stretch midway through the 2019 season that had the Raiders at 6-4 and in contention, they stumbled to a 1-5 finish and missed the playoffs.

That pattern repeated last season when the offense took some strides to help the team get to 6-3 before too many turnovers and porous defense led to another late-season collapse that led to an 8-8 season.

The Raiders hope the changes they made this season to bolster the defensive line with the additions of Yannick Ngakoue, Quinton Jefferson, Gerald McCoy, Darius Philon and Solomon Thomas, and a simpler system under coordinator Gus Bradley will lead to more success from a unit that allowed the most points and second-most yards per play in the NFL in the past three seasons.

While Mayock is encouraged by the defensive line, he needs to see results.

“I feel like the answer to that question is a few weeks away and I’m just being honest with you. I played for Bill Parcells, and he always said, ’Potential means you ain’t done a damn thing yet,’” he said. “I’m a big believer in that, and it doesn’t mean that these guys that are with us haven’t done it individually in the league. We just haven’t done it collectively as a Raiders defense yet.”

The additions this offseason have led to a reduced role for 2019 fourth overall pick Clelin Ferrell, who is slated to be a backup behind Ngakoue and Maxx Crosby at defensive end.

Ferrell has failed to live up to his high draft status with only 6 1/2 sacks in two seasons, but Mayock said line coach Rod Marinelli wants to use a rotation of linemen this season which should give Ferrell plenty of chances.

“I think the thinking behind all of it, and not necessarily about Cle, is that what Rod wants to get to is a fluid wave,” he said. “Pick a team, Philadelphia a couple of years ago when they won the Super Bowl, they had a wave. They had eight guys that just rolled and that’s what Rod is trying to do.”