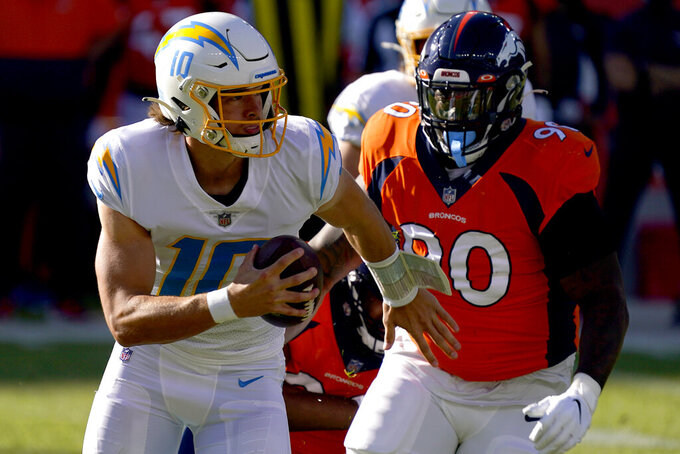 LOS ANGELES (AP) — Jon Gruden was known for his enthusiastic reviews of players during his nine seasons as an analyst for ESPN's “Monday Night Football.” That hasn't dissipated since he returned to the sideline as Las Vegas Raiders coach.

Gruden has been especially ebullient when it comes to Los Angeles Chargers rookie quarterback Justin Herbert, who the Raiders face for the first time Sunday. Gruden said the Raiders met with Herbert during the NFL scouting combine and that he is eager for his defense to go against him.

“This guy’s the real deal. He is a problem for everybody in the AFC,” Gruden said. “He’s further along than most rookies. He has shown the ability to throw the ball in the tight windows. He’s made athletic plays and shown great toughness.”

Herbert is averaging an AFC-best 303.3 passing yards per game and has thrown at least three touchdown passes in four straight games. But it hasn't translated to wins because the Chargers (2-5) can't hold on to a lead. They are the first team in NFL history to squander four straight leads of 16 points or more, including last Sunday's 31-30 meltdown at Denver when they had a 21-point lead midway through the third quarter.

Teammates have credited Herbert for being mostly unflappable, but the rookie is frustrated about having only one win in six starts.

“If anyone thinks this doesn’t bother me at all, they’re wrong. I take a lot of pride in this team," he said. “All we can do now is go forward ... The Raiders disguise a lot of things pretty well on defense. So it’s another another tough challenge for us.”

Las Vegas' Derek Carr is off to an equally impressive start. The veteran signal caller has a 110.2 passer rating, best through the first seven games in his seven-year career. He is the third-most accurate QB since the start of last season with a 70.3% completion rate.

Carr and the Raiders have a 4-3 record, the first time since they made the playoffs in 2016 that they have been over .500 at this point.

Playing the Chargers starts a three-game stretch of AFC West matchups for the Raiders. They go home next week to face Denver before hosting Kansas City the following week with a chance to sweep the season series against the Chiefs. Las Vegas beat Kansas City 40-32 last month. The Raiders haven’t had a winning record in the division since sweeping the AFC West in 2010.

“Big stretch for us,” Carr said. “Any time it’s in division, those games mean more than just one game. Very, very excited for the opportunity that we have in front of us.”

Meanwhile, the Chargers are looking to snap an eight-game losing streak in division play.

Gruden and the Raiders are eager to make their first trip to SoFi Stadium, even though it won't have the same feel as their usual trips to Los Angeles due to no fans allowed ) which often means it has the feel of a Raiders home game.

The Raiders still have a large contingent of fans from their 13 years in LA (1982-94) and tried to partner with the Chargers about returning before the NFL went with Stan Kroenke's Hollywood Park stadium plan in Inglewood. The Raiders eventually got their deal in Las Vegas while the Chargers eventually decided to become the second team in Los Angeles.

The Raiders have had to juggle things around on the offensive line this season with their projected starting line together for only three snaps all season. Right tackle Trent Brown hurt his calf on the opening drive of the season and has played only one game since because of the injury, a positive coronavirus test, and an IV mishap that sent him to the hospital last week. Left guard Richie Incgonito went down with an Achilles tendon injury in Week 2. Denzelle Good has filled in capably at both spots.

Josh Jacobs bounced back from his worst game in two seasons with the Raiders with one of his best. After being held to 17 yards on 10 carries in a loss to Tampa Bay two weeks ago, Jacobs responded with a career-high 31 carries for 128 yards in last week’s 16-6 win at Cleveland.

“He’s a great finisher and has great stamina,” Gruden said. “He’s the real, real deal. I could not be any more proud of Josh Jacobs.”

The Chargers got 210 yards on the ground last week at Denver, but might be hard pressed to get a duplicate effort against the Raiders. Justin Jackson had a career-high 89 yards and has had three straight games over 50 scrimmage yards. Troymaine Pope added 67 rushing yards but is questionable due to being in concussion protocol. Joshua Kelley is fifth among rookie running backs with 374 scrimmage yards, but has struggled after having a stretch of two fumbles in three games.

A big reason for the Chargers failing to maintain leads are coverage breakdowns in the secondary. Safety Nasir Adderley was out of place often during the second half last week and defensive coordinator Gus Bradley continues to search for a slot cornerback after Desmond King was traded to Tennessee last Monday. The defensive backs might find themselves under more pressure this weekend if pass rushing specialist Joey Bosa is out due to a concussion.