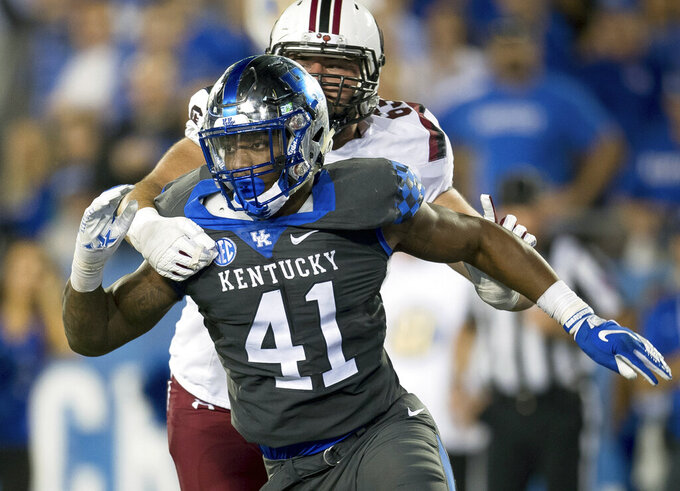 FILE - In this Sept. 29, 2018, file photo, Kentucky linebacker Josh Allen (41) rushes against South Carolina during the second half of an NCAA college football game, in Lexington, Ky. Allen is a possible pick in the 2019 NFL Draft. (AP Photo/Bryan Woolston, File)

ALAMEDA, Calif. (AP) — Mike Mayock won't exactly get to ease into his new role as Oakland Raiders general manager after spending years as a draft analyst.

Mayock knows he will be highly scrutinized with three first-round picks thanks to coach Jon Gruden's much-criticized trades that sent franchise building blocks Khalil Mack and Amari Cooper out of town as part of a massive rebuilding project in Oakland.

The first big step in that process begins with the draft, where the Raiders hold the fourth, 24th and 27th picks in the first round.

"As Jon keeps telling me, 'Don't mess it up, dude. I took a lot of slings to get you three first-round picks,'" Mayock said. "We laugh about it all the time but ... I don't feel any pressure about it. I love it and embrace it because it's going to give us an opportunity to continue to try to turn the corner here and become a good football team, and I think what it really gives us is flexibility and that's what I love about it."

Finding a replacement for Mack will be paramount in the draft after the Raiders had an NFL-low 13 sacks last season following the deal that sent the 2016 AP Defensive Player of the Year to Chicago for a package that included two first-round picks.

This draft is considered to be deep with pass rushers, including Nick Bosa, Josh Allen, Montez Sweat and Brian Burns on the outside, and Quinnen Williams and Ed Oliver on the inside.

Now it's about making the right choices.

"On paper it looks great," Gruden said. "When you start studying the tape, you have to decide for yourself. Some of these guys, like I just said, are a bit mysterious, because they're young, they're underclassmen, they didn't play a high percentage of snaps."

While the Raiders are in prime position with four of the top 35 picks in the draft, they won't pick again until No. 106, having traded away their third-rounder for Antonio Brown. Mayock called the picks from about 20 to 60 the sweet spot in the draft where some of the safest picks happen and he would like to get more picks in that range if possible.

"I'd love to get a couple more picks in there. I just think we have a lot of holes that need to be filled," he said. "I think that's a really good place to go fishing."

Mayock and Gruden have publicly proclaimed Derek Carr their franchise quarterback throughout the offseason. That hasn't stopped them from meeting with some of the top QBs in the draft, including Kyler Murray and Dwayne Haskins.

In 12 drafts as a head coach, Gruden's teams have selected a QB in the first four rounds just twice, with the Raiders taking Marques Tuiasosopo in the second round in 2001 and Tampa Bay taking Chris Simms in the third round in 2003.

"If we found somebody we like better or thought had bigger upside, then you got to do the right thing for the organization," Mayock said.

Mayock and Gruden appear to be meshing much better than Gruden did last year with Reggie McKenzie, who was fired in December. That's true even though they don't always see eye to eye on the draft, with Gruden more apt to draft for need such as the pick of tackle Kolton Miller in the first round last year when safety Derwin James was still on the board, and more willing to take a risk on a player with character questions.

"In our building, I think Jon will roll the dice a little more, and I think I'm little more conservative," Mayock said. "I think that's a good balance."

The Raiders could be just the fifth team this century to make three first-round picks in the same draft. Cleveland was the most recent team to do it, taking Myles Garrett, Jabril Peppers and David Njoku in 2017. Minnesota had three in 2013 (Sharrif Floyd, Xavier Rhodes, Cordarrelle Patterson), the Rams did it in 2001 (Damione Lewis, Adam Archuleta, Ryan Pickett), and the Jets had four first-rounders in 2000 (Shaun Ellis, John Abraham, Chad Pennington and Anthony Becht).

Oakland signed Isaiah Crowell to be in the mix at running back with smaller backs Jalen Richard and DeAndre Washington, as well as Chris Warren III, who sat out his rookie year with an injury. The Raiders could target a back in the draft, either a featured back to carry a heavy load in the first round or a rotational one later in the draft.