Raiders head to London on winning note after win vs. Colts 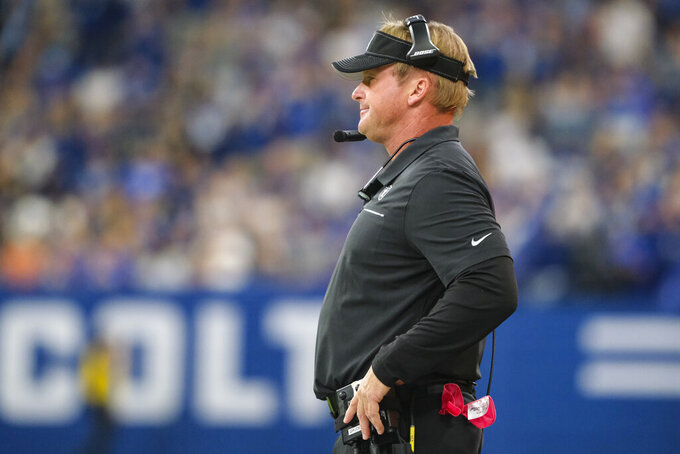 Oakland Raiders head coach Jon Gruden during the second half of an NFL football game against the Indianapolis Colts in Indianapolis, Sunday, Sept. 29, 2019. (AP Photo/AJ Mast)

After a couple of weeks when almost nothing went right, the Oakland Raiders found their game in time to make sure they can start their stay in London in a good mood.

The Raiders bounced back from two straight lopsided losses with perhaps their best road game in two seasons under coach Jon Gruden, beating the Indianapolis Colts 31-24 on Sunday.

The positive vibes from that game made were needed before the Raiders took flight overseas as part of their 48-day stretch in between games at the Oakland Coliseum.

"It's already a long flight, so going over there with a loss would have been terrible," rookie defensive end Maxx Crosby said.

The Raiders scored touchdowns on three of their first four possessions after posting only two scores in their previous 18 drives and managed to do just enough defensively to beat the Colts.

It was a major turnaround from the previous two weeks, when the Raiders lost 28-10 at home to Kansas City followed by a 34-14 loss at Minnesota.

"There are a lot of reasons to start making excuses, but our guys were really resilient and tough mentally, and those are components that I think that are going to serve us well as we continue to build our team," Gruden said. "I'm really proud of these guys."

Led by a healthy Josh Jacobs and a jet sweep that speedy new receiver Trevor Davis took 60 yards for a touchdown, Oakland had its most productive day on the ground in years. The Raiders ran for 188 yards, their most in a game since Week 16 against Indianapolis in 2016. Jacobs had 17 carries for 79 yards and gained two key first downs late in the fourth quarter to help the Raiders run out the clock.

The lack of a pass rush has been a recurring theme for the Raiders the past two years. Oakland failed to record a single sack for the second straight week and applied little pressure on Jacoby Brissett. The Raiders were credited with just three quarterback hits as second-year linemen Arden Key, Maurice Hurst and P.J. Hall haven't taken the step forward the team had been hoping for this year.

Erik Harris moved into the starting lineup at free safety after Curtis Riley struggled last week. Harris had seven tackles and delivered the biggest defensive play of the game when he intercepted Brissett and returned it 30 yards for a touchdown with the Colts trying to drive for the tying score late in the fourth quarter. That was Oakland's first interception of the season.

Middle linebacker Vontaze Burfict was suspended for the rest of the season after being ejected in the second quarter for a helmet-to-helmet hit against Indianapolis tight end Jack Doyle. Burfict has a long history of on-field infractions, leading to the severe punishment for this hit. Burfict can appeal, but the Raiders will be without their defensive signal-caller and captain for significant time no matter what.

Guard Jordan Devey will miss the rest of the season with a pectoral injury. Devey was filling in for Gabe Jackson, who is expected to miss one more game with a knee injury. ... WR J.J. Nelson was a late scratch after reporting tightness in his leg during warmups.

3.52. After getting gashed by Dalvin Cook and Minnesota a week ago, the Raiders' run defense fared much better against Marlon Mack and the Colts. Oakland allowed 81 yards on 23 carries (3.52 average), after giving up 5.55 yards per carry the previous week against the Vikings.

The Raiders arrived Monday in London, where they will spend the week before taking on the Bears on Sunday for their first meeting against former star edge rusher Khalil Mack since trading him to Chicago before last season.