Raiders look to keep rolling on road vs. Jets 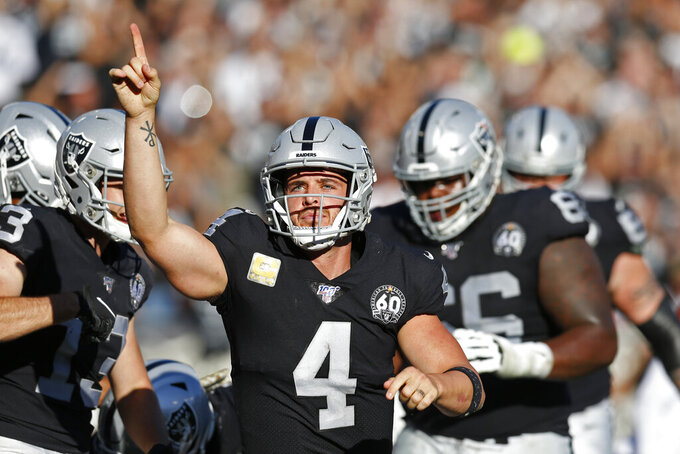 Oakland Raiders quarterback Derek Carr celebrates after scoring a touchdown during the first half of an NFL football game against the Cincinnati Bengals in Oakland, Calif., Sunday, Nov. 17, 2019. (AP Photo/D. Ross Cameron)

EAST RUTHERFORD, N.J. (AP) — Derek Carr and the Oakland Raiders got their season back on track with a three-game homestand sweep.

They’re hitting the road again this weekend, traveling to the East Coast to take on Sam Darnold and the rejuvenated New York Jets.

“These little road trips are nothing now,” Carr said. “We’re flying all the way across to New York and we’re like, that’s half the flight from what we are used to, and it’ll be good for us.”

The Raiders (6-4) are 1-3 on the road this season, having won at Indianapolis but lost at Minnesota, Green Bay and Houston. They also won a “home” game in London last month in the middle of a stretch in which they played five straight games away from Oakland. So, Jon Gruden’s group has this traveling thing down.

“It’s so funny, talking to our guys, we have a good routine of little games we play together, little team bonding things that we do,” Carr said. “Some of the guys are like, ‘Man! We get to go on the road this week!’ because they’re excited to bond some more and play some of our little games that we play.

“And that’s the makings of a group that gets along and loves being around each other.”

The Raiders’ victories over Detroit, the Los Angeles Chargers and Cincinnati marked their first sweep of a three-game homestand since 1980. Oakland’s 17-10 win against the winless Bengals last week matched the fewest points it has allowed in the past six seasons.

A win Sunday at MetLife Stadium would set up a showdown for first place in the AFC West next week at Kansas City. But first the Raiders have to take care of a Jets squad that has won two in a row and has some newfound confidence after wins over the Giants and Washington.

“We can’t let off of the gas,” linebacker Jordan Jenkins said.

The Raiders can owe much of their success to the performance of their rookie class, led by first-round running back Josh Jacobs, whose 1,067 yards from scrimmage are the ninth most for a Raiders player through 10 games.

“We try to put more on them every week,” Gruden said. “We're not limiting anything. I think that's the key for their development.”

Jets safety Jamal Adams had three sacks against the Redskins and two the previous week against the Giants. His six sacks are already the franchise’s single-season record for defensive backs.

He needs two to tie Arizona’s Adrian Wilson (2005) for the most by a DB in one season in NFL history. Adams has his sights set higher.

Adams made the Pro Bowl last year in his second season and could be playing his way to a return appearance and possibly a spot on the All-Pro team.

Carr is playing some of his best football of late despite throwing his first interception in four games last week. He’s averaging an NFL-best 9.2 yards per attempt over the past six weeks and is on pace to set career highs in completion percentage (72.3%), passer rating (105.2) and yards per attempt (8.0).

Carr will try to reverse a trend of cold-weather struggles this week when temperatures are supposed to be in the 40s. Carr is 2-8 in his career in games that started with the temperature below 50 degrees, with just a 66.3 passer rating in those 10 games.

“I love it cold,” Carr said. “If I could have it 50 degrees in my house, I would. My wife would kill me, but I'd do it. So, I've never really minded the cold or anything like that.”

The Jets are allowing a league-low 79.1 yards rushing per game after holding Washington to 54 last week. Opponents are also averaging a league-low 2.98 yards per carry vs. New York.

Only one player has rushed for 100 yards against the Jets this season: Dallas’ Ezekiel Elliott, who had 105 on 28 carries in Week 6. New York will have a tough task this week in facing Jacobs, who has three 100-yard performances and ranks fourth in the NFL in rushing with 923 yards.

“He’s playing about as well as anybody,” Jets coach Adam Gase said. “His yards after contact, the amount of missed tackles that have occurred against him, I think he’s the best one in the league.”

After being picked apart by a slate of star quarterbacks such as Patrick Mahomes, Deshaun Watson, Aaron Rodgers and Kirk Cousins to start the season, the Raiders defense has fared much better the past couple of weeks against some easier competition.

Oakland ranked 30th in the NFL, allowing 6.29 yards per play and a 114.8 passer rating through the first nine weeks. The Raiders have held Philip Rivers and the Chargers, then Ryan Finley and the Bengals to 4.52 yards per play the past two weeks, ranking 10th best, and a league-low 47.9 passer rating in those two games.