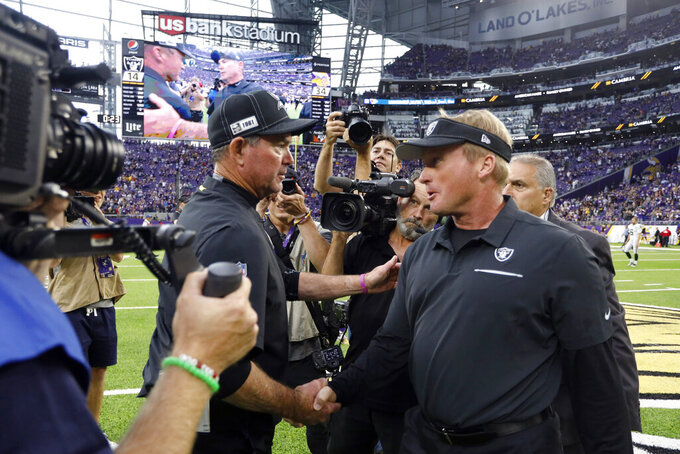 ALAMEDA, Calif. (AP) — The last two weeks of Year 2 under Jon Gruden have looked an awfully lot like the first season did for the Oakland Raiders.

The Raiders have back-to-back lopsided losses following an encouraging season-opening win, with the struggles on both sides of the ball exposed during a 34-14 loss at Minnesota on Sunday.

"This is something you can't just move on from." linebacker Tahir Whitehead said. "It's a long road ahead. If we don't get this corrected, then it is going to be a long season. We need to hold each other accountable and make sure nobody is comfortable after this loss, because there is a lot of things that need to be fixed. We experienced a long season last year. I am not trying to go through the same thing and many others on this team will say the same."

Gruden's first season back in Oakland was a rough one, featuring the trade of star pass rusher Khalil Mack before the start of the season and a four-win campaign when the Raiders often looked overmatched.

The talent level was supposed to be better this season, although that hasn't helped the performance the past two weeks, starting with a 28-10 loss to Kansas City. The Raiders have lost back-to-back games by at least 18 points for the first time in seven years.

Gruden didn't directly address Whitehead's comments but acknowledged his team needs plenty of work, especially from the first and second-year players who are being counted on to carry a big load.

"I'm not going to get into all the problems that he's talking about," Gruden said. "We had some breakdowns, no question, and when have breakdowns and penalties against good teams on the road, usually you lose the game, and that's what happened. You don't fall behind 21-0 to a team like that on the road and expect to win, certainly, but in response to his questions, I'll deal with him individually."

The defense fared well in the opener against Joe Flacco and the Broncos and managed to keep Patrick Mahomes and the high-powered Chiefs off the scoreboard in three of four quarters in Week 2. There was little positive at all against Kirk Cousins and the Vikings. Oakland forced no turnovers and just two punts all day; Minnesota had no problem gaining yards on the ground or through the air. The few positive plays were negated by penalties, including five that generated first downs. Oakland also allowed a 92-yard TD drive, the third time this season an opponent has driven at least 90 yards for a touchdown.

WR J.J. Nelson. One of the only bright spots in the lopsided loss was Nelson, who made his debut with the Raiders after missing the first two weeks with an ankle injury. He had four catches for 36 yards, including a 29-yarder for a TD off a flea- flicker.

Carr. After promising signs in the opener, Carr has gone back to a quarterback who is unwilling or unable to stretch the field, and the results have been poor. Oakland has stalled offensively after scoring on six of the first 10 drives this season. The Raiders had a 17-drive stretch the past two weeks that featured 10 punts, three interceptions, one missed field goal, one turnover on downs, one drive that ended at halftime and one touchdown. Oakland managed to add a garbage time TD against the Vikings, but has had little consistent offense since a fast start to the season.

RT Trent Brown left the game with an ankle injury. ... LBs Vontaze Burfict (elbow), Marquel Lee (ankle) and Nicholas Morrow (ankle) also are dealing with injuries and Gruden said the team might need to bring in some new linebackers this week for depth. ... RG Gabe Jackson (knee) isn't expected to practice this week after getting hurt in training camp, but could be an option next week.

3 — Rookie running back Josh Jacobs was expected to be a key part of the passing game this season, but that hasn't developed yet. His only catch through three weeks was a 28-yarder in the opener and he has been targeted just three times during the 46 pass plays when he is on the field.

"We're trying," Gruden said. "We definitely do want to get Josh to be a big part of the passing game. No doubt. We certainly do."

The Raiders head to Indianapolis for the second contest in a five-game stretch away from Oakland. They will go straight from there to London for a "home" game against Chicago before going to Green Bay and Houston following an off week.