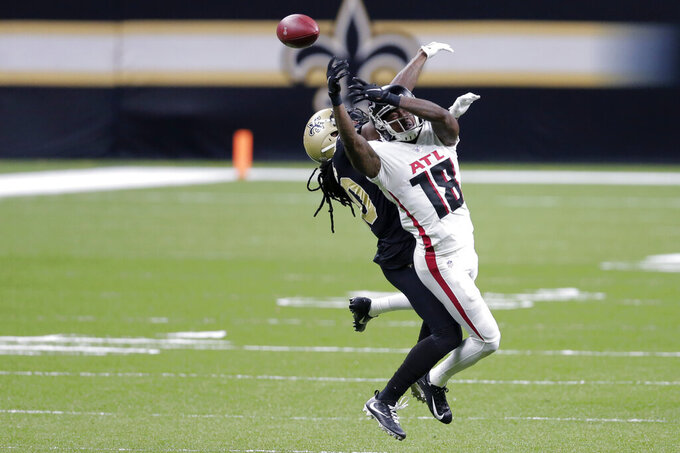 ATLANTA (AP) — The Las Vegas Raiders have positioned themselves to make a run at what would be just their second playoff appearance since reaching the Super Bowl during the 2002 season.

Of course, they've been here before.

A year ago, in their last year in Oakland, the Raiders entered the stretch run with a 6-4 records — the same mark they have heading into Sunday's game against the Atlanta Falcons. But the team that now calls Las Vegas home stumbled to the finish, managing one win in its final six games while averaging a league-low 14.7 points during that span.

“We’re definitely a better team this year, but we have to — and I mean have to — finish this season better than we did last year,” quarterback Derek Carr said. “I’m hopeful and I believe that we will and I think that it’s different,"

This year feels much the same to the Falcons (3—7), who don't have a whole lot to play for other than avoiding their third straight losing season.

Interim coach Raheem Morris is trying to stay positive, even after an ugly 24-9 loss to the New Orleans Saints last weekend.

The Raiders' hopes of contending for the AFC West title took a huge blow last week with a 35-31 loss to Super Bowl champion Kansas City Chiefs. Patrick Mahomes threw a 22-yard touchdown pass to Travis Kelce with 28 seconds to play for the winning score.

Coach Jon Gruden was in no mood to discuss comparisons to last year's Raiders. He's only looking ahead.

“This comparing stuff is for ESPN analysts. Those days are in my past,” said the former "Monday Night Football" commentator. “We have a long way to go. We’re making progress.”

The Raiders have struggled getting to the quarterback, making the second fewest sacks in the league with 11. The only times they’ve had fewer sacks after 10 games in the Super Bowl era came in 2014 (10) and 2018 (9).

But after watching Atlanta's Matt Ryan get sacked eight times last week by New Orleans, the Raiders are hoping to get some chances.

“You get excited about that,” defensive tackle Johnathan Hankins said. “We obviously have to go out and play the game. Just because one team had nine sacks or whatever amount they had, doesn’t mean we’ll have the same, too.”

Of course, Ryan is surely excited for the chance to bounce back against the league's 28th-ranked pass defense. Matty Ice is coming off his lowest-rated game since 2013, but he's never been one to wallow in a disappointing performance.

“This league will humble you week in and week out," said Ryan, who will be playing in his 200th career game. "You have to flush it out of the system, get back to work and stay confident and believe that we’re going to play great this week.”

Las Vegas picked up a couple former members of the Falcons defense heading into the game.

Defensive end Takk McKinley was claimed off waivers a couple of weeks after being cut by Atlanta, ending a tumultuous, injury-plagued stint with the team that made him a first-round draft pick in 2017.

The Raiders also signed defensive end Vic Beasley Jr., an All-Pro with the Falcons in 2016, to their practice squad. Beasley hasn't come close to matching the form he showed in his best season.

“Well obviously he’s had a history in the NFL," Gruden said. "We've got to see if we can get him going again, but I’ll make no predictions.”

COPING WITH THE VIRUS

The Falcons had to cancel practice and work virtually Thursday after two non-coaching members of the staff tested positive for COVID-19.

It's the third time this season the Falcons have taken such a step, but none of their games has been affected.

The team also got a bit of good news on the virus front, activating defensive end Dante Fowler Jr. from the COVID-19 reserve list.

The Raiders are in better shape after having to practice last week without a significant number of players because they had “high-risk contacts” to a teammate who tested positive. Las Vegas, Gruden and its players have already been fined more than $1.2 million and docked a sixth-round draft pick for violations of the COVID-19 protocols.

The empty stadiums this season have allowed TV audiences to hear much more of the talk that goes on at the line of scrimmage.

Carr is particularly vocal, with his frequent audibles with interesting names like “Purple Walrus” or “Pistol Pete” becoming popular on Twitter. He was calling out so many last week that NBC announcers joked he was like the third member of the broadcast booth.

“I’ve had some fun with it,” Carr said. “I got some new ones obviously for this game and all those kinds of things. My mind is always working, just coming up with stuff, but don’t get it twisted. I don’t come up with all of them. I’m not that smart.”