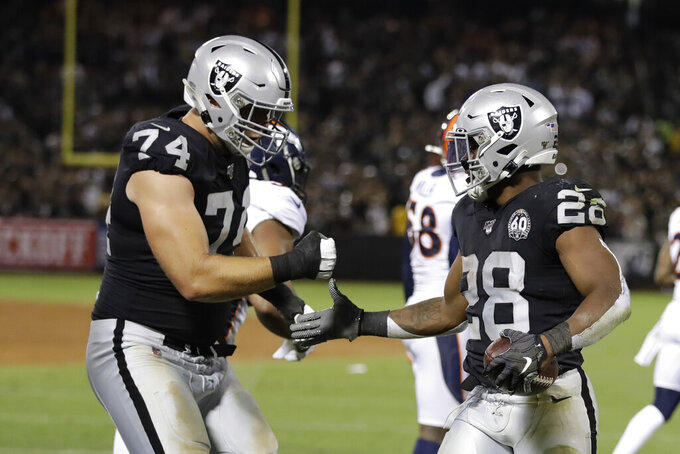 Oakland Raiders running back Josh Jacobs, right, is greeted by offensive tackle Kolton Miller (74) after scoring a touchdown during the first half of an NFL football game against the Denver Broncos Monday, Sept. 9, 2019, in Oakland, Calif. (AP Photo/Ben Margot)

"It makes a world of difference, I'll just leave it at that," Carr said. "I'm going to look terrible if they aren't at their best, because I need their help. I need them to be at their best so I can be at my best."

It was only the second time in 10 career games that the Broncos failed to sack Carr. The other came during his rookie season in 2014.

For Brown, it was validation after signing a $66 million, four-year contract in the offseason that made him the highest-paid tackle in NFL history.

For Miller, who spent his evening stonewalling Chubb, it was redemption after an injury-plagued rookie season that had some questioning his value as the 15th overall pick a year ago.

"I had a blast," Miller said Thursday. "Just let it loose. Coming on out top was really fun. We really ran the ball well, had a lot of inside zone and threw in some play-action. It was a combination of everyone doing their job. It made it a lot easier in the passing game."

Miller started all season at left tackle last year, when he battled right knee and elbow injuries. Miller ended up allowing a league-high 16 sacks, according to Pro Football Focus.

The Raiders say that the game against Chubb is more indicative of Miller's talent, even though it is a small sample size.

"We've only played one game," coach Jon Gruden said. "He's got (Kansas City's) Frank Clark this game, one of the premier rushers in football. He's just stronger, he's more experienced, he's healthy. Those are three things that have taken his game to another level and he's got to continue to prove it every week."

The Broncos pressured Carr on only five plays, according to Pro Football Focus, while Chubb had a 10% success rate in pass-rush situations against Miller.

Oakland's quarterback said he knew things would be different for Miller when the team gathered in training camp.

"He looks like the guy that when he first showed up we were like, 'Oh, shoot,'" Carr said. "The way he could bend being that tall and stuff like that, it's unbelievable. And he looked noticeably stronger. You could see his punch was a little harder. He could sit down and hold a little bit more weight on the bull rush and things like that. It was noticeable how much better he was."

Note: Cornerback Gareon Conley, who left Monday's game on a stretcher, is expected to play against the Chiefs on Sunday. Conley is listed as limited, although defensive coordinator Paul Guenther said Conley was a full participant in practice.