Raiders missing key pieces on offense for game vs. Bills 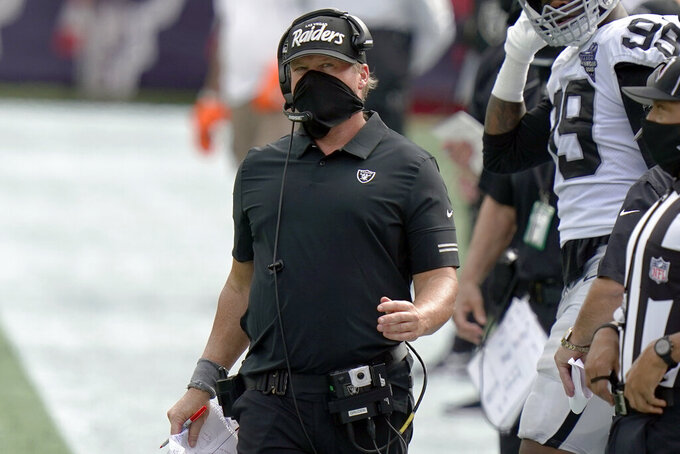 Las Vegas Raiders head coach Jon Gruden works along the sideline in the second half of an NFL football game against the New England Patriots, Sunday, Sept. 27, 2020, in Foxborough, Mass. (AP Photo/Steven Senne)

The Las Vegas Raiders will be shorthanded on offense once again this week with two starting receivers and two starting offensive linemen unlikely to play against the Buffalo Bills.

Coach Jon Gruden said Friday that rookie receiver Bryan Edwards will miss the game Sunday after hurting his ankle and foot last week in New England and that fellow rookie Henry Ruggs III is doubtful with injuries to his knee and hamstring.

Gruden also said it’s doubtful that right tackle Trent Brown will return after missing the past two games with a calf injury and starting left guard Richie Incognito is on injured reserve with an Achilles injury.

The Raiders (2-1) also will be without rookie cornerback Damon Arnette after he underwent surgery on a broken thumb and will head to injured reserve. Nevin Lawson is expected to get the start in his place.

There was some good news with starting middle linebacker Nick Kwiatkoski expected to return after missing the past two games with a pectoral injury and reserve tackle Sam Young also expected back from in injured groin.

The most glaring problem heading into this week is at receiver where veteran starter Tyrell Williams was placed on season-ending injured reserve in training camp to set the stage for two rookies to start.

Ruggs had an impressive first half of his debut with three catches for 55 yards and two carries for 11 yards. But he then caught only one pass for 4 yards over his next six quarters and now is expected to miss his second straight game with an injury.

Edwards had five catches for 99 yards before leaving last week’s loss to the Patriots with an injury and now will miss some time.

That likely sets the stage for veterans Nelson Agholor and Zay Jones to get the bulk of the action, alongside slot receiver Hunter Renfrow.

“We don’t feel limited at all,” offensive coordinator Greg Olson said about the injuries at receiver. “I think we’ve stated at the start of training camp that we feel very good about the depth in the wide receiver room, and we like what we’ve seen from Zay Jones and Nelson Agholor since they’ve been here. So, it hurts any team you’d say to lose a starter. Certainly it hurts somewhat but we’ve always, again as we’ve talked about, we got a next man up mentality and we feel very comfortable with those guys in our offense.”