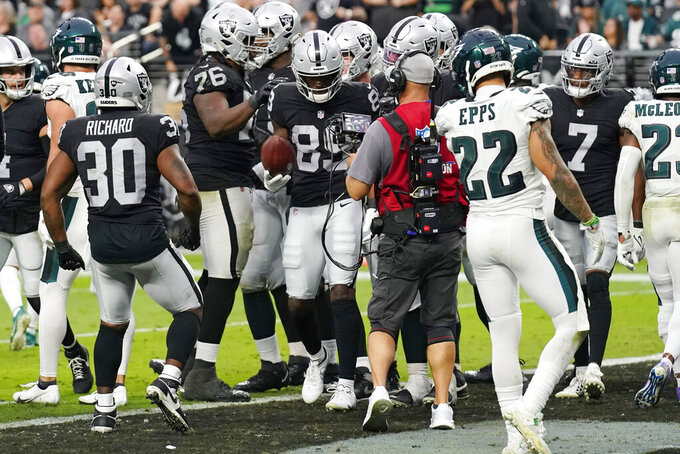 Las Vegas Raiders wide receiver Bryan Edwards (89) holds the ball after scoring a touchdown against the Philadelphia Eagles during the second half of an NFL football game, Sunday, Oct. 24, 2021, in Las Vegas. (AP Photo/Rick Scuteri)

LAS VEGAS (AP) — No matter the work in practice or the small mistakes in games, Derek Carr has never questioned his offensive line.

That continuing faith has turned into a strong six-plus quarters from the Las Vegas Raiders’ five men who protect him.

The unit allowed only two hits while keeping their quarterback upright in not allowing a sack during his career day in Las Vegas’ 33-22 win over the Philadelphia Eagles at Allegiant Stadium on Sunday.

“The offensive line today set the tempo for what we’re trying to do,” said Raiders interim head coach Rich Bisaccia, who is 2-0 since taking over after Jon Gruden resigned on Oct. 11. “Not only in the run game, but pass protection. They kept him clean with no sacks. They’re a young group that’s on the come up and they’ve been practicing extremely hard. They were exciting to watch.”

The Raiders averaged 8.9 yards per play in last week’s 34-24 road victory against the Denver Broncos, their highest in a game since 2000. That effort carried to Sunday with Las Vegas averaging 7.0 yards per play.

The Broncos sacked Carr twice but they were on the same drive within the first 1:11 of the second quarter. Since then, the Raiders have not allowed a sack in 103 minutes of game action, one of the reasons the Raiders are 5-2 heading into their bye week.

“I’m very proud of those guys. They should get a lot of credit because we have five wins,” Carr said. “It all starts up front in this league. If you can dominate the line of scrimmage, you have a good chance to win football games, and they’ve done a great job for us.”

After the Eagles took a 7-0 lead on the game’s opening drive, Carr threw an interception inside the Philadelphia 10-yard line on the ensuing possession.

That was his only mistake.

Las Vegas scored on its next five possessions, four of them touchdowns. Following that interception, Carr led the Raiders on a nine-play, 72-yard drive capped by an 18-yard touchdown pass to Foster Moreau to tie it 7-7.

On the ensuing drive, the Raiders went 96 yards in 10 plays in which Carr went 6 of 6 for 53 yards as part of a stretch of 15 straight completions. Running back Josh Jacobs, who had five touches for 45 yards on that drive, ended it with a 7-yard touchdown run.

“Getting rid of the ball quick. You go out and use a stopwatch and see how the ball is going quick,” said Eagles defensive tackle Fletcher Cox. “At the end of the day, he was on fire. We didn’t get to him.”

Jacobs finished with 68 all-purpose yards before being ruled out the rest of the game due to a chest injury. Kenyan Drake filled in with 69 yards on 14 carries and a touchdown.

“We had some fun out there,” said left tackle Kolton Miller. “It was a really awesome game. Being able to drive the ball downfield, lean on them and get some big passes, it’s awesome.”

“We’re going to go as they go,” Carr said. “If they make holes and if we have time to throw it, we feel confident in our attack.”