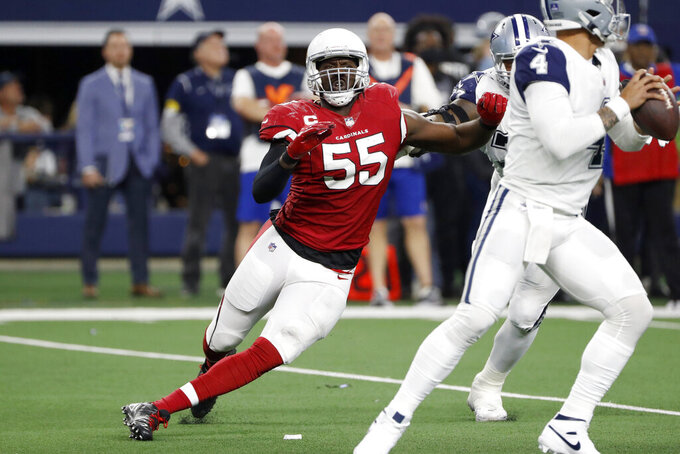 FILE - Arizona Cardinals outside linebacker Chandler Jones (55) rushes Dallas Cowboys quarterback Dak Prescott during the second half of an NFL football game in Arlington, Texas, Jan. 2, 2022. Jones bounced back from an injury-plagued 2020 season to record 10 1/2 sacks in 2021 for his seventh double-digit sack season. Only 12 players have had more seasons with at least 10 sacks and Jones' 107 1/2 for his career lead the NFL since he made his debut in 2012. (AP Photo/Roger Steinman, File)

The Las Vegas Raiders have overhauled their defensive line at the start of the free agency period by agreeing to a three-year deal with former Arizona edge rusher Chandler Jones and trading away Yannick Ngakoue to Indianapolis.

The Raiders also cut defensive end Carl Nassib in a salary cap move and agreed to a two-year deal with interior lineman Bilal Nichols as new coach Josh McDaniels and coordinator Patrick Graham put their imprint on the defense.

The Colts announced the trade and two people familiar with the moves confirmed the other moves that still need to be finalized. The people spoke on condition of anonymity because the moves haven't been announced.

The switch at edge rusher from Jones to Ngakoue was the most consequential move as the new regime sought a better fit for its scheme for the spot across from Maxx Crosby. Jones played for Graham when he was an assistant in New England and has been one of the most productive pass rushers in the NFL over the past decade.

The 32-year-old leads the NFL with 107 1/2 sacks since entering the league in 2012 and has seven double-digit sack seasons. He bounced back from an injury-filled 2020 season to get 10 1/2 sacks last season in Arizona.

NFL Network reported his contract will be worth $52.5 million with $34 million guaranteed.

Ngakoue had 10 sacks in his first season with the Raiders and now will join his fifth team in less than 19 months. He was traded from Jacksonville to Minnesota on Aug. 31, 2020, then dealt to Baltimore that season before signing with the Raiders last March. Las Vegas will carry an $8 million cap charge for Ngakoue in 2022.

The Raiders get back cornerback Rock Ya-Sin in the trade. Ya-Sin was a second-round pick by the Colts in 2019 and started 29 games the past three seasons. He has two interceptions and eight passes defensed in his career and allowed a career-low 9.5 yards per reception last season, according to Pro Football Focus.

The move to cut Nassib will save the Raiders $8 million in room on this year's salary cap as of June. ESPN first reported that move.

Nassib’s biggest impact with the Raiders came off the field last June when he became the first active NFL player to come out as gay. Nassib got strong support from his teammates and the organization.

The Raiders signed Nassib to a three-year, $25 million contract in 2020 but he never took on a big role on defense, playing less than half the snaps each season. His best highlight on the field came in last season's opener when his strip-sack in overtime against Lamar Jackson set up the winning touchdown in the Raiders' 33-27 win over Baltimore.

In 27 games over two seasons with the Raiders, Nassib had four sacks and 13 quarterback hits.

Nassib was due a $7.75 million salary this year, which was too expensive for the Raiders given his production. Las Vegas had restructured his contract last season and will carry a cap charge of $1.65 million this season and $4.95 million next season to account for bonuses that hadn't hit the cap yet.

The Raiders also have added some help for the interior of their defensive line by locking up Nichols to a deal that NFL Network said is worth $11 million, with $9 million in guarantees.

The Raiders needed help on the interior of their line with Quinton Jefferson, Solomon Thomas, Johnathan Hankins and Darius Philon all hitting free agency after getting the bulk of the snaps there last season. Las Vegas previously signed Andrew Billings to compete for time there in 2022.

Nichols fits well into Graham's defensive scheme that will feature three down linemen in the base sets. Nichols has experience playing all three spots in that kind of defense in his four years with the Bears. He had 51 tackles with three sacks and five tackles for loss in 17 games last season. He also had 31 quarterback pressures, according to Pro Football Focus.

Nichols was originally drafted by Chicago in the fifth round out of Delaware in 2018. He has missed only five games in four seasons and has 11 sacks, 18 tackles for loss and 84 pressures.

The Raiders also added a fullback, agreeing to a one-year deal with Jakob Johnson, according to his agent Drew Rosenhaus. Johnson spent the past three seasons in New England playing under McDaniels.

Las Vegas also agreed to a deal with receiver and special teams contributor Mack Hollins, a person with knowledge of the deal said on condition of anonymity because it hadn't been announced. Hollins has 56 career catches for 760 yards and six TDs in 65 games for Miami and Philadelphia.

The Raiders also released linebacker Nick Kwiatkoski in a move that saves $3.2 million on the salary cap and leaves a $5 million dead money charge.