Raiders' potential on defense must translate to results 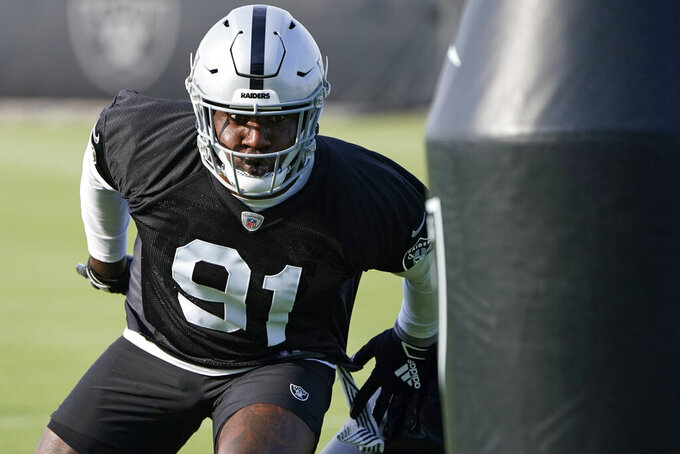 Ready or not, the offensively charged Baltimore Ravens invade Las Vegas for “Monday Night Football,” with dual-threat quarterback Lamar Jackson leading the way one year after he led the league with 6.3 rushing yards per attempt.

“Baltimore presents a challenge that’s unique in this league, and we better be ready to play, that’s all I know,” Mayock added.

After allowing a rather unattractive 26.7 points per game during their promising 6-3 start last year, the Raiders closed the season by getting pounded for an even uglier 33.8 points per contest during a 2-5 slide. The 29.9 points allowed per game overall was third highest in the league, they registered the third-fewest sacks and turnovers, and their stop unit had the third-worst third-down efficiency.

The only surprise about coach Jon Gruden relieving close friend Paul Guenther as defensive coordinator after a 44-27 home loss to the Indianapolis Colts in Week 14 was why it took so long.

Guenther’s defensive units allowed an average of more than 6,000 yards per season under his watch. Since 2018, the Raiders allowed a league second-worst 6.05 yards per play.

Enter new defensive coordinator Gus Bradley, the architect of Seattle’s Legion of Boom, plus secondary coach Ron Milus and linebackers coach Richard Smith, and it’s been clear why there is clarity with the mentality of this year’s defensive unit.

“It’s a different energy floating around the building, and it’s contagious,” second-year cornerback Damon Arnette said. “Everyone is on the same page.”

Early signs of improvement from a younger group that underachieved last season have instilled confidence throughout the system. The group includes Arnette and safety Johnathan Abram, plus the additions of veterans who have played under Bradley who can provide leadership, like Denzel Perryman and K.J. Wright.

There’s also been the impressive play of rookie cornerback Nate Hobbs during the preseason, and the seamless additions of veteran corner Casey Hayward and rookie safeties Tre’von Moehrig and Tyree Gillespie.

Defensive linemen Yannick Ngakoue, Quinton Jefferson, Solomon Thomas and Darius Philon are also new to the mix, all of whom have helped build continuity and chemistry with returning linemen Cle Ferrell, Maxx Crosby and Carl Nassib.

“It’s always difficult to build trust, especially when you got new guys coming in or rookies playing, and you got a whole group,” Bradley said. “I give the players a lot of credit on that, and our assistant coaches. They’ve done a really good job of meshing together. And really you can talk trust, but actions are more important, and I think that’s only proven on the game field.”

Wright, who was signed as a free agent last week, said he immediately noticed Bradley's imprint on the defense considering how fast they play, and how detailed they are to the scheme.

“I’ve been doing this since my rookie year, and they take care of all the intricate details that Gus wants to accomplish,” Wright said. “Guys are on their details. When you see that throughout this season, you won’t see too many mistakes with this defense.”

The first exam in what is one of the toughest schedules in the league is Monday against the Ravens, who ranked No. 1 with 3,071 yards rushing last season.

Considering the Raiders allowed a league ninth-highest 2,013 yards on the ground last season, Bradley said one of the biggest emphasis during training camp has been working with the front line and stopping the run.

“We are going to go out there and compete our tail off and there is a mindset that we know (the Ravens) can do a lot of damage running the ball,” Bradley said. “I like the way it’s going, but we’ll see on Monday night. I got a good feeling about the group. They are working hard together. They understand what is asked of them.”