Raiders rookies not only ones with something to prove 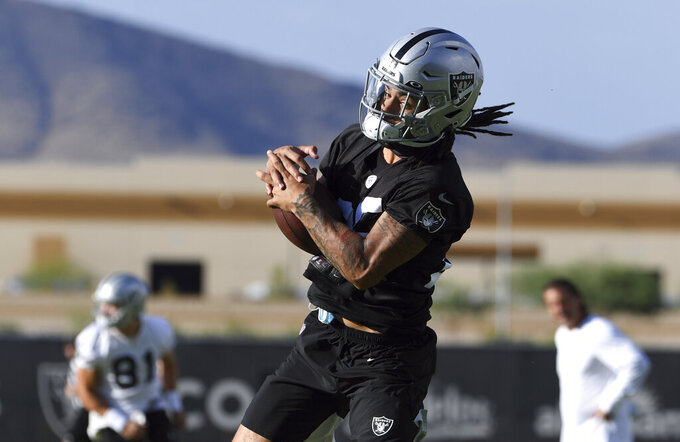 HENDERSON, Nev. (AP) — With the Las Vegas Raiders headed to San Francisco for their final preseason game Sunday, coach Jon Gruden said this year’s lot of draft picks isn’t the only group with something to prove.

“Well, it’s all of our young players, last year’s class and this year’s class kind of combined,” Gruden said. “We’ve had a chance to develop players, and that’s all the coaches can do. We can draft, and we can trade, and we can sign guys. At the end of the day, coaches are here to develop players and I’m really excited about the job our staff has done. I’ve seen some of these young guys really get better.”

With injuries taking their toll on several of last year’s rookies, a total of 47 games were missed.

Several from this year’s class will see significant time, with tackle Alex Leatherwood joining a retooled offensive line, safeties Tre’von Moehrig and Tyree Gillespie rotating time with Arnette in an athletic secondary, linebacker Malcolm Koonce expected to help put a bandage on a banged-up corps along with safety Divine Deablo, who can slot in during nickel packages.

Fifth-round choice Nate Hobbs has been the biggest surprise of this year’s rookie class and may have already earned one of the starting corner slots. Gruden said seventh-round pick Jimmy Morrissey is like having an extension of the coaching staff on the field and has put himself in a good position to make the final 53-man roster.

And while Sunday is the final dress rehearsal for several of those rookies and second-year players before the Sept. 13 regular-season opener on “Monday Night Football” against the Baltimore Ravens, there are those who know they’re challenging older players for roster spots.

“I think there’s great competition at the wide receiver position,” offensive coordinator Greg Olson said. “That’ll probably be the most difficult decision, will be making the cuts at the wide receiver position. And the offensive line, there will be a good player that might not make the roster. But those two positions really are very competitive, and they’ll be probably the most difficult decisions.”