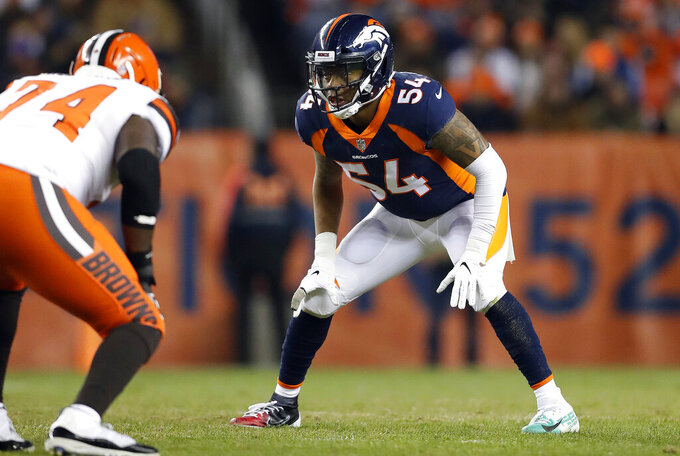 The moves are the latest ones in a roster overhaul by coach Jon Gruden and new general manager Mike Mayock after the team struggled to a four-win season in Gruden's first year back on the sideline.

Marshall joins recently signed Vontaze Burfict to give the Raiders two veterans at linebacker who will be counted on to upgrade a position that has been a weakness for years in Oakland. The two are expected to team with Tahir Whitehead as starters for coordinator Paul Guenther's defense.

Marshall has spent the past six years of his seven-year career in the AFC West in Denver. The Broncos declined to pick up his option earlier this offseason, making him a free agent.

Marshall has been limited to 11 games in two of the past three seasons, missing time with a hamstring injury in 2016 and a bruised knee last season. Marshall started seven games for the Broncos in 2018, collecting 42 tackles without a sack or an interception as rookie Josey Jewell's playing time increased.

Crowell is expected to compete for playing time at an open position with Oakland's two leading rushers last season, Doug Martin and Marshawn Lynch, remaining as free agents. The leading returning back is Jalen Richard, who had 55 carries for 259 yards and is used more as a receiver.

Chris Warren III will also be in the mix. He was impressive at times in training camp as a rookie last season but spent the entire year on injured reserve.

Crowell ran for 685 yards and six TDs at an average of 4.8 yards per carry last season with the Jets. He has 3,803 yards rushing with 27 TDs and a 4.3 yard per carry average in five seasons with Cleveland and New York.

The Raiders have been one of the busier teams so far this offseason, making a big trade for star receiver Antonio Brown, as well as signing free agents like Trent Brown, Lamarcus Joyner, Tyrell Williams, J.J. Nelson, Curtis Riley, Nevin Lawson and Burfict.