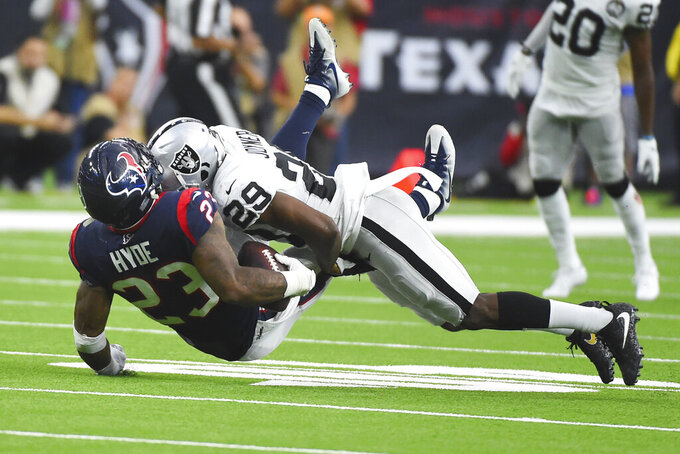 HOUSTON (AP) — The Oakland Raiders lamented their missed opportunities after squandering a fourth quarter lead in a 27-24 loss to the Houston Texans on Sunday.

"This one hurt my heart so much," quarterback Derek Carr said. "We only had three possessions in the second half ... and got points on two of them. The third one ... I felt like we should still be on the field."

The Raiders led for the entire game until Deshaun Watson evaded the rush and connected with Darren Fells on a 9-yard scoring toss to put Houston up 27-24.

"We were there and got to him, but then he would complete it," defensive end Arden Key said. "Mentally, it drains you."

Despite that, Oakland had plenty of time to put together a drive to tie or take the lead. But the Raiders were forced to punt when Gareon Conley, who was traded to the Texans from Oakland this week, knocked down a pass to Tyrell Williams on third down.

"I've just got to make those plays on that last drive," Williams said. "It's just coming down to those. It's easy fixes. As a whole, it's a good game for us. We saw we can play with a good AFC team. There were just a couple of plays that could've gone our way."

Carr had 285 yards passing with three touchdowns as the Raiders (3-4) lost for the second week in a row.

"No one is hanging their head," Carr said. "We're disappointed, it hurts ... but everything is still in front of us."

Houston was able to eat up the clock with two long drives in the second half to keep the ball out of Carr's hands.

The Raiders were flagged 11 times for 100 yards and Houston gained five first downs because of penalties on Oakland.

The Texans had a chance to take the lead early in the third quarter, but Watson was sacked on third-and-11 from the 12 and they had to settle for a field goal that cut the lead to 14-13.

Carr found Williams on a 46-yard touchdown pass later in the third to make it 21-13.

Houston got within 21-20 when Watson threw a 4-yard touchdown pass to Fells on the last play of the third quarter.

Carr hit Hunter Renfrow on a short pass and he evaded a tackler and dashed 65 yards for a touchdown to put the Raiders up 7-0 with about four minutes left in the first quarter.

"It was something that I'll never forget and I got the ball," Renfrow said. "It was special. I couldn't believe there was no one around me. I just tried not to fall."

The Texans tied it later in the first when Watson threw a 12-yard touchdown pass to Duke Johnson.

Darren Waller put the Raiders back on top when he grabbed an 8-yard reception for a touchdown with 9½ minutes left in the second quarter. Waller celebrated the score with a nod to Houston by impersonating Rockets star James Harden. He faked a between the legs dribble before mimicking Harden's signature step back, taking an imaginary shot and finishing by doing the NBA star's stirring the pot celebration.

Waller doesn't have any connection to Houston, but thought it would be a cool way to celebrate.

"I told the tight end group that I would do it," he said. "If all of us were around, one of them would play defense and the other one would play the basket. I was just trying to have fun."