Raiders trade up for S Trevon Moehrig in 2nd round 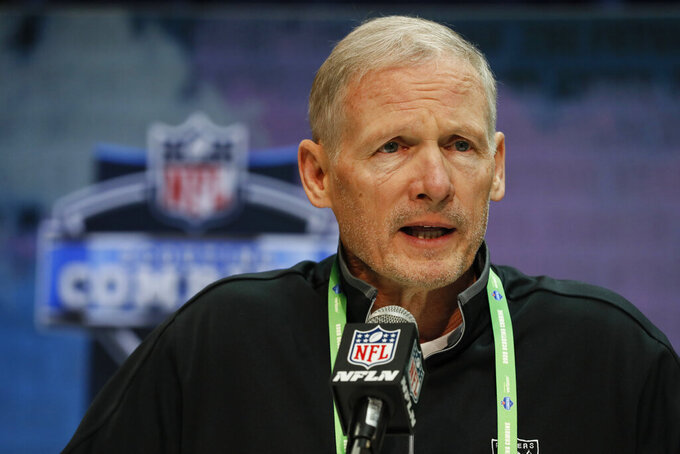 FILE - Las Vegas Raiders general manager Mike Mayock speaks during a press conference at the NFL football scouting combine in Indianapolis, in this Tuesday, Feb. 25, 2020, file photo. The Las Vegas Raiders spent the free agency period dismantling their offensive line and mostly ignoring the secondary. Now heading into the NFL draft, those are the two spots that appear to be the most urgent needs for the Raiders to fill starting with pick No. 17 in the first round. (AP Photo/Charlie Neibergall, File)

The Las Vegas Raiders made no secret about where their focus would be in the second round of the NFL draft.

After years of struggling to stop anyone's offense, the Raiders drafted three defensive players they hope will spark a struggling unit.

Las Vegas traded up to take TCU safety Trevon Moehrig in the second round Friday night before adding Buffalo edge rusher Malcolm Koonce and Virginia Tech linebacker Divine Deablo in the third round.

“Let’s face it, we need defense,” general manager Mike Mayock said. “We’re not a very good defensive football team. I think our needs met up and matched what was going to be available today. So in my own mind, yeah, this was going to be a defensive day.”

The Raiders have allowed the most points and second-most yards per play on defense in three seasons since Jon Gruden returned as coach.

The pick of Moehrig got the Raiders off to a good start. He was projected by many to go in the first round and Mayock said he strongly considered trading up on Thursday to get him after taking tackle Alex Leatherwood with his first pick.

But that didn't happen and Moehrig slipped and the Raiders pounced on Friday, trading ahead of Dallas to take the player they hope will fill a big void at free safety.

The Raiders sent pick No. 48 and a fourth-round pick to San Francisco to move up five spots. Las Vegas also got a seventh-round pick in return.

“We felt great about that,” Mayock said. “He’s our No. 1-rated safety. We had him with a big grade on our board. We got a guy with a first-round grade at 43 in the second round. We’re pretty excited.”

The Raiders plan to use Moehrig as the deep safety in coordinator Gus Bradley’s defense with 2019 first-rounder Johnathan Abram filling the safety role in the box.

Moehrig said he talked to the Raiders early in the process and knew it was a strong possibility that would be his destination.

“They just told me they needed a safety and they were planning to come get me,” he sad. "So yeah, I’m super excited. I’m pumped.”

Moehrig is a versatile safety with strong ball skills and he gives Bradley the playmaker in the back of the defense that he needs.

He had seven interceptions in his career and led all safeties with 12 pass breakups in 2019 and eight in 2020, according to Pro Football Focus.

Moehrig fell possibly because of a back injury before the draft, according to NFL Network. Moehrig said he has been cleared and is completely healthy and Mayock said the Raiders had no concerns.

“Coming from TCU, I was the quarterback of the defense, so I feel like I’m really confident coming in and taking that leadership role, command of the defense, taking the reins and just leading,” Moehrig said. “I’m super comfortable with that, confident with it and I’m just excited to get started.”

The Raiders are counting on big growth from the three returning young players and a big impact from Moehrig to improve a struggling defense.

Koonce and Deablo project as depth players at the start. Koonce had 18 sacks in 45 games in college and joins Ngakoue, Clelin Ferrell, Maxx Crosby and Carl Nassib as the team's defensive ends.

Deablo is a former high school receiver who moved to safety in college but will play linebacker in the pros. He had four interceptions this season and has the ability to match up against tight ends.

The Raiders will have four picks Saturday with two in the fifth round, one in the sixth and one in the seventh.