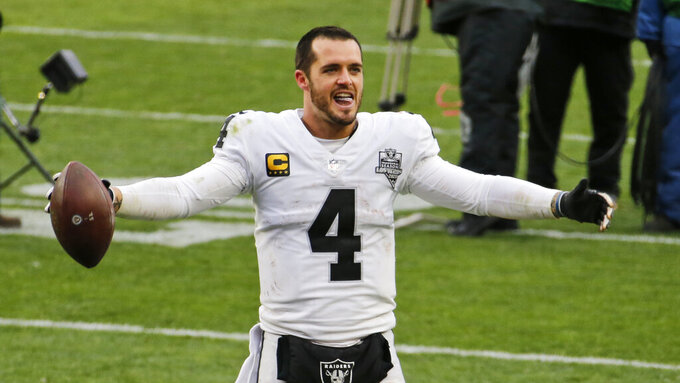 Raiders teams in the recent past withered whenever the weather turned bad. This year’s version proved it could thrive on a wet, windy and cold day in Cleveland thanks to a throwback performance.

With a dominant running game, a few key plays from Derek Carr and a surprising defensive effort, the Raiders snapped an 11-game losing streak in games played below 50 degrees by beating the Cleveland Browns 16-6 on Sunday.

“I have been in some locker rooms with some guys before where when it gets a little cold or a little windy or rainy, the look in their eyes turns a little bit different,” Carr said. “In pregame, in the locker room, and as we took the field, I felt like there was nothing stopping us because of everyone’s energy and juice. We are just going to have fun. That is what we are here to do.”

The Raiders (4-3) are doing plenty of things they hadn’t in recent years in their first season in Las Vegas. They won their first game in Kansas City in eight years, then mounted a pair of double-digit comebacks and managed to win a game played in cold, wet and windy weather in Cleveland that made it almost impossible to throw or kick at times.

The defense even got into the act after entering the game as the only team to allow at least 24 points in every game this season.

While the poor weather helped, the Raiders did a good job bottling up Kareem Hunt and allowed their fewest points since a 15-0 win over Kansas City on Dec. 16, 2012. The Raiders also ended an NFL-record 116-game streak of allowing at least 10 points.

“We found a way to win, and whenever you are able to do it the way we did where everyone has to deal with the conditions, it feels good,” Carr said. “A team coming from Las Vegas and the desert, a team that comes from the West Coast and came out here into the cold and terrible weather, that is a good feeling, especially on the road.”

The running game. After being held to 17 yards on 10 carries last week, Josh Jacobs delivered in a big way with 31 carries for a season-high 128 yards. It was the most rushes for a Raiders player since 2007, but Jacobs had help. Devontae Booker had five carries for 29 yards and Carr got into the mix as well with six carries for 41 yards. The 45 runs were the most in a game for the Raiders in eight years.

Pass rush. For a second straight week the Raiders were held without a sack and only had one quarterback hit. For the season, the Raiders are tied for the second-fewest sacks in the league with just seven.

Denzelle Good and Brandon Parker. Good has been steady all season for the Raiders, filling in at both right tackle and left guard. He might have had his best game yet on Sunday and was called one of the team’s “unsung” heroes by coach Jon Gruden. Parker was supposed to be inactive but played because starting right tackle Trent Brown was hospitalized before the game following a reported IV mishap. Sam Young then went down with a knee injury in the first half and Parker played well in relief.

Henry Ruggs III. Gruden talked about getting Ruggs more involved after he had only two catches for 35 yards last week. The wind took away the deep threat and Carr missed Ruggs on an attempt downfield. But Ruggs wasn’t able to make an impact on shorter stuff, catching two passes for 8 yards and running once for 1 yard. He almost had a TD catch but was unable to drag his second foot inbounds on the play.

DT Maurice Hurst sprained his ankle but the injury is not considered serious. ... S Jeff Heath also left the game with a hip injury but might not miss any time. ... CB Damon Arnette will see a specialist in Houston about his injured wrist and could possibly return from IR this week.

6 — The Raiders limited the Browns to six drives all game, the fewest in any game in the past 30 seasons. The ball control on offense helped. Las Vegas was the third team in the past 25 seasons to have at least three drives that took at least eight minutes off the clock. The Raiders had five drives of at least 10 plays for just the second time in the past 18 seasons.

The Raiders travel to Los Angeles on Sunday to face the Chargers.