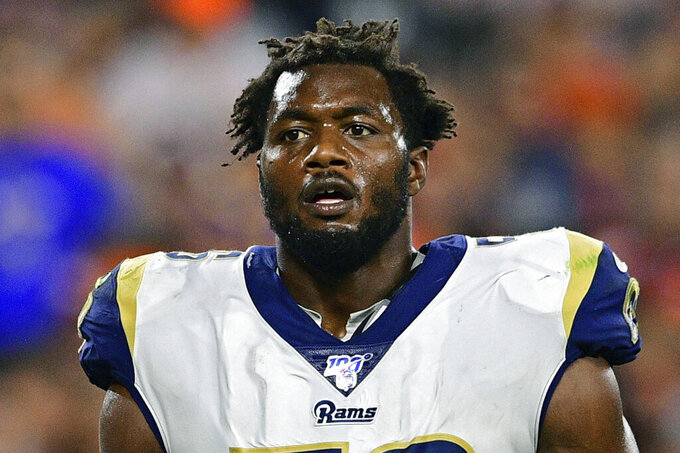 FLE - In this Sept. 22, 2019, file photo, Los Angeles Rams defensive end Dante Fowler stands during the second half of an NFL football game against the Cleveland Browns, in Cleveland. A person familiar with the deal says the Atlanta Falcons have agreed to sign outside linebacker Dante Fowler. The person spoke to The Associated Press on condition of anonymity because free-agent signings can't be announced until after the league year begins Wednesday afternoon, March 18, 2020. (AP Photo/David Dermer, File)

The Rams agreed to re-sign starting offensive linemen Andrew Whitworth and Austin Blythe on Wednesday during the opening hours of the new league year.

A person with knowledge of the situation also confirmed the Rams agreed to a one-year deal worth up to $13 million for pass-rushing linebacker Leonard Floyd. He will be the nominal replacement for Dante Fowler, who joined an exodus of defensive starters from Los Angeles.

The Rams also signed defensive tackle A'Shawn Robinson to a two-year year deal, according to the source.

The person spoke on condition of anonymity because the team hasn't announced the signings.

The 38-year-old Whitworth will return for his 15th NFL season after agreeing to a three-year contract with the Rams. He has started every game Los Angeles was trying to win since his arrival in 2017, and he played a major role in the Rams' offensive success in their first two seasons under coach Sean McVay.

Whitworth's play appeared to slip somewhat last season with more penalties while the Rams' entire offense backslid, but he remained a key veteran leader and a reliable blocker.

Blythe has been a key starter for the past two seasons while playing three positions on the line for the Rams, who claimed him off waivers from Indianapolis in 2017. Blythe has started at left guard, right guard and center for Los Angeles.

The rest of the Rams' offensive line is in flux after right tackle Rob Havenstein had a rough 2019 season and young starters Joseph Noteboom and Brian Allen incurred season-ending injuries.

The Rams missed the playoffs despite going 9-7 last season with an above-average defense. With little room to spend underneath the salary cap while planning a massive contract extension for cornerback Jalen Ramsey, the Rams inevitably will need a major defensive overhaul.

They began to fill that talent vacuum with the addition of Floyd, who spent his first four NFL seasons with the Chicago Bears. The ninth overall pick in the 2016 draft had seven sacks in his rookie season, but his totals have declined in each subsequent season.

The Bears released him Tuesday after acquiring Robert Quinn, but he landed a quick reunion with Brandon Staley, his position coach for the past two seasons with Chicago. Staley is the Rams' new defensive coordinator.

Robinson spent the past four seasons with the Detroit Lions after playing three seasons and winning a national title at Alabama. Robinson started 16 games for Detroit in 2017, but has played only about 44% of the Lions' snaps since Matt Patricia took over.

Robinson could be the effective replacement for Brockers, who has been a stalwart on the Rams' defensive line for the past eight seasons.