Rams' Akers a medical marvel in comeback from torn Achilles 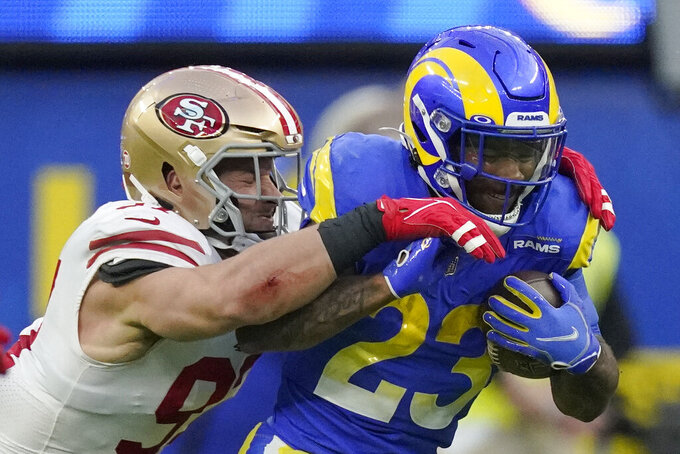 Cam Akers was not supposed to be here.

Not after tearing his right Achilles tendon in July, an injury that normally takes at least nine months and as much as a year from which to recover. But the Los Angeles Rams running back has proven he's far from normal.

“I can't think of another injury comeback situation that I've ever been around that's even close,” marveled quarterback Matthew Stafford, who's in his 13th NFL season.

Yet, here Akers is, at the Super Bowl and again a key part of Los Angeles' offense. And when his season was supposed to have been long over before it even started.

“Facts, you know?” Akers said. “I think it happened the way it was supposed to happen. God doesn't make mistakes. That was a lesson for me. I learned a lot, I grew a lot. ... I came back at the perfect time and I'm just happy I'm able to contribute to the team.”

The bulk of the questions asked of the second-year running back during his Zoom session with reporters earlier this week were about the injury, the recovery process and his unlikely return.

He's a medical marvel, and he understands how unusual his situation is — and why he has become such a fascinating figure in the buildup to the game Sunday against the Cincinnati Bengals.

“Any attention is good attention and I'd rather it be for scoring touchdowns,” Akers said with a smile. “But I'll take it, you know? As long as it's positive.”

Flash back to July 20, when Akers was working out a few days before the Rams were scheduled to open training camp and the news circulated that he was injured in a private workout. And not just any injury, but one that would require surgery and likely sideline him for the entire season and beyond.

“I was so sick for him,” Stafford said.

The injury was a crushing blow to Akers, who was coming off a promising rookie season during which he rushed for a team-leading 625 yards and two touchdowns and caught 11 passes for 123 yards and a score.

First came the surgery to repair the torn tendon, which was performed by Dr. Neal ElAttrache of the Kerlan-Jobe Orthopedic Clinic in Los Angeles and the long-time head team physician for the Rams and Dodgers.

Next came the recovery process — and a steely determination by Akers, who began his rehabilitation as soon as he could with an eye on beating the usual timetables for a return.

“It was probably like three months when I knew it was a possibility,” he said. “That’s when I would say I knew I was working to come back for this season."

Stafford recalled sending Akers a text of support shortly after hearing about the injury. The two kept in touch as the running back began his comeback.

“I remember him telling me, ‘You guys make it to the playoffs and I’ll be back,'" Stafford said. “I just thought to myself, what a great mindset to have. There's no chance in hell he's going to be back helping us out.”

Akers was in a walking boot a month after surgery.

He was jogging less than two months later.

The running back was running again a few months after that.

“Watching him attack it day in and day out, it was unbelievable,” Stafford said. “It was nerve-racking for me at times. I'd be in there getting ready for practice or something and he's starting to jump rope for the first time and I know how far out of surgery he is.

Days of clearing obstacles turned into weeks of physical triumphs. And then months.

By December, it appeared Akers could actually pull off a return to the field this season. But it came with a condition.

“I didn’t want to come back half-stepping or, you know, limping,” Akers said. “I just wanted to make sure I was going to be better than I was before I got hurt.”

The Rams activated Akers from injured reserve on Christmas Day — just over five months after his season appeared over.

“He was the smart one,” Stafford said. “He knew what he was saying. It just shows the power of his mind and the power of his body to be able to heal himself and our guys in the sports performance area in our building — they do an unbelievable job.”

Akers didn't play at Minnesota in Week 16 or at Baltimore in Week 17. But he made his season debut in the regular-season finale at home against San Francisco, gaining 3 yards on five carries and catching three passes for 10 yards.

Akers has played in the Rams' three playoff games, and started the past two. He has rushed for 151 yards on 54 carries, and rebounded from losing two fumbles in the divisional-round win at Tampa Bay. Akers also has five catches for 62 yards in the postseason, again flashing his dual-threat ability.

The numbers, though, don’t particularly matter. The fact he's back — and preparing to play in the Super Bowl — is simply astonishing.

“I could have been very well not playing in it,” Akers said. “So I just feel so blessed to be able to be here physically and be able to contribute. Not many people would even be dressing out or even be on the sideline. So I just feel blessed and highly favored.”