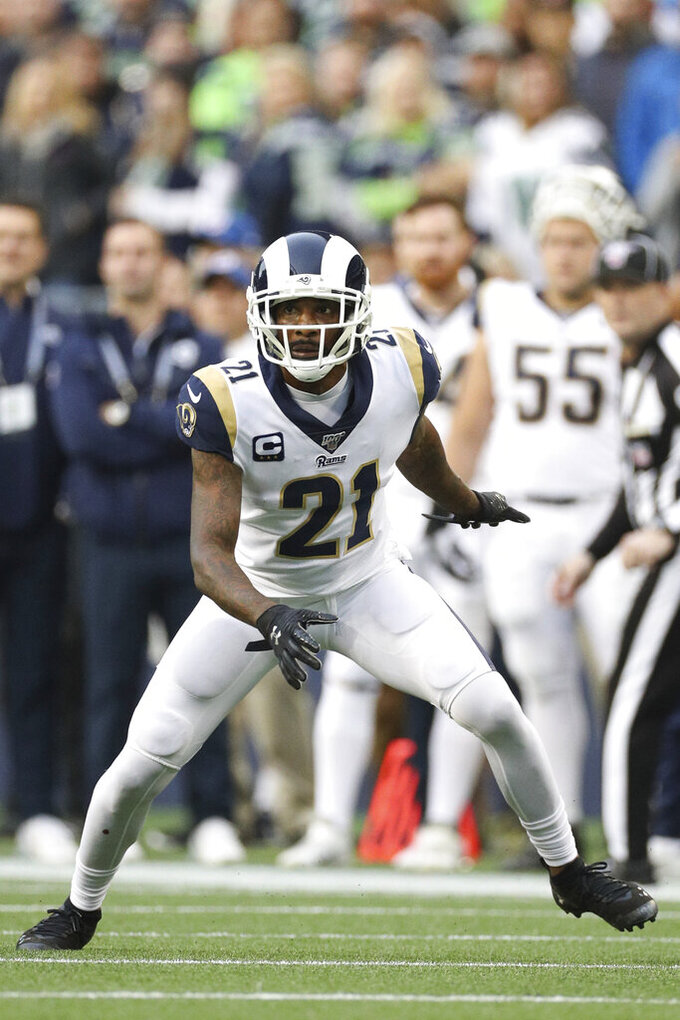 Talib, who did not play in the Rams' 20-7 loss to the San Francisco 49ers on Sunday because of fractured ribs, is expected to return later this season, coach Sean McVay said Monday.

Noteboom sustained a torn ACL and MCL in his right knee in the first quarter against the 49ers and will miss the rest of the season.

The injuries come as the Rams have lost three straight games for the first time in McVay's three seasons in charge.

"It presents an opportunity for us to be what we say (we are)," McVay said. "People seem to think that things aren't going that well, but I think our guys are continuing to believe. They're staying the course, and we're going to see this thing through."

Talib has 14 tackles in five games this season, but has yet to intercept a pass. Talib is in his second season with the Rams and has formed an effective cornerback tandem with Marcus Peters, when both players have been healthy.

Troy Hill started in place of Talib against the 49ers and had five tackles and one pass defense. Hill, a five-year veteran who has spent the last four seasons with the Rams, started seven games last season when Talib had surgery to repair a high-ankle sprain.

"We expect Troy to fill in perfectly," defensive end Michael Brockers said. "He's a guy who kind of filled in for Lib last year when Lib went out with the ankle injury, and we still continued to roll. So we knew with him stepping in we were comfortable, and nobody flinched. Nobody thought any differently because we knew that he could come in there and play."

Noteboom was replaced by Jamil Demby, who has played 147 career snaps on offense. Demby filled in at right guard against New Orleans when Austin Blythe sustained an ankle injury and started the following week at Cleveland.

McVay said the Rams would fill the starting role in-house with either Demby or David Edwards, a rookie lineman from Wisconsin, but they could add a veteran for depth.

The Rams had to replace two starters on the offensive line coming into this season, and struggles up front have limited what had been one of the NFL's best offenses the previous two seasons. The loss of stability after left guard Rodger Saffold went to the Tennessee Titans in free agency and center John Sullivan was not re-signed have magnified the struggles of Noteboom, Demby and center Brian Allen.

"For these other guys, it's not that they're doing a bad job," left tackle Andrew Whitworth said. "They're just in that mix of growing as football players. They're young, and we're all learning to communicate together and we're all in it the same way, and, you know what, it's on all of us to get it fixed and get better."

The Rams could be without a third starter at Atlanta on Sunday as safety John Johnson III is being evaluated for a right shoulder injury he sustained against the 49ers. Johnson will get an MRI as part of a second opinion, and McVay said the injury could require surgery.

Marqui Christian would start if Johnson, who is tied for the team lead in interceptions (2) and is tied for second in tackles (51), cannot play.