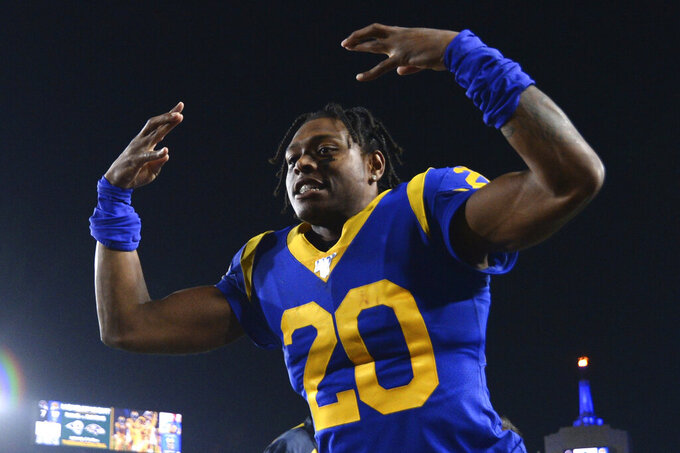 FILE - Los Angeles Rams cornerback Jalen Ramsey celebrates the team's win over the Chicago Bears in an NFL football game Sunday, Nov. 17, 2019 in Los Angeles. Jalen Ramsey will become the highest-paid defensive back in NFL history after agreeing to a five-year, $105 million contract extension with the Rams. The extension announced Wednesday, Sept. 9, 2020, includes $71.2 million, the most guaranteed money ever given to a defensive back, according to Ramsey's agent, David Mulugheta.(AP Photo/Kyusung Gong, File)

THOUSAND OAKS, Calif. (AP) — Jalen Ramsey is getting used to life on the road in the NFL without opposing fans there to scream and shout, but the Los Angeles Rams' star cornerback wishes it didn’t have to be that way this week.

The “Bills Mafia,” as the fans of the Buffalo Bills call themselves, probably feel the same way with Ramsey coming to upstate New York on Sunday.

“I played them and they’re loud, and especially they have a good team now so they would have been for sure hyped up. I don’t think they like me that much so, so they probably would have gave me a little extra,” Ramsey said. “I love it, though."

Ramsey didn’t have much to say about Bills quarterback Josh Allen this week after calling him “trash” in a memorable 2018 interview with GQ magazine that drew the ire of Bills fans, instead deferring to the praise that teammates Aaron Donald and John Johnson offered for the third-year passer.

Donald, the All-Pro defensive tackle, said Allen “can do it all,” while Johnson described him as the rebirth of Pittsburgh Steelers quarterback Ben Roethlisberger with an uncommon combination of arm strength, size, and mobility.

“I’ve seen a lot of that, what they said, you know, being able to run the ball,” Ramsey said. “You know he’s talented. Can show it.”

Though he has been with the Rams (2-0) for less than a year, Ramsey seems to have largely redirected his boisterous energy away from microphones since being traded from Jacksonville last October.

“He knows that eyes are on him and that people are counting on him, not to just be a shutdown corner, to be a complete corner,” new Rams defensive coordinator Brandon Staley said. “That includes, you know, taking a leadership role and we think he’s doing a good job. He’s continuing to grow in that way.”

The memory of his only previous game against Allen might have also influenced Ramsey’s words this week. It was Allen’s skills as a runner that stood out in 2018 when Ramsey was with the Jaguars, rushing for 99 yards and a touchdown. Allen completed 8 of 19 passes for 160 yards and a touchdown in the Bills’ Week 12 win, with Ramsey making four tackles and one pass defense.

Allen’s passing acumen has led the way for the Bills (2-0) as he has thrown for a league-best 727 yards and six touchdowns without an interception. His passer rating is third behind Russell Wilson and Lamar Jackson, and Allen’s 70.1% completion percentage stands out. He has never completed more than 58.8% of his throws in either of his first two seasons.

Allen said he has moved past Ramsey’s comments but is looking forward to facing him.

“That was so long ago in my opinion and it’s really a non-factor,” Allen said. “He’s been a great player in this league for a long time and he’s only gotten better. He’s a problem we’re going to have to deal with.”

Ramsey is also looking forward to the matchup, especially if Allen is willing to throw to his side of the field.

“He’s unique in himself, and, yeah, he presents challenges," Ramsey said. "Every week we have to face some type of new challenge, and this is the challenge of him and that Bills offense. He has some weapons around him. He can make plays running the ball, extending plays, searching, searching. Kind of the things that everybody knows about, but also I’m confident in what I can do and this Rams defense can do and that’s kind of what matters most to me and the guys around here.”

Ramsey had one tackle in Los Angeles’ 37-19 win at Philadelphia on Sunday, with Eagles quarterback Carson Wentz seemingly intent on avoiding whichever receiver Ramsey had in coverage. Taking away top wideouts and forcing throws elsewhere is why the Rams committed to a five-year, $105 million contract extension earlier this month, the richest ever for a defensive back, but Ramsey hopes to get more chances to make plays.

“For sure, I’m always up for the challenge and always kind of want that, but, you know, I got 105 reasons why they might not do that,” Ramsey said.