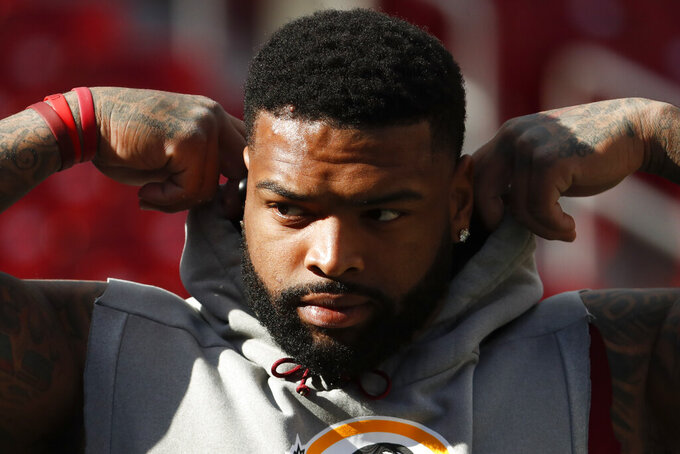 FILE - In this Oct. 21, 2018, file photo, Washington Redskins offensive tackle Trent Williams (71) takes the field for warms up before an NFL football game against the Dallas Cowboys in Landover, Md. The San Francisco 49ers have acquired the seven-time Pro Bowl left tackle from the Redskins. Two people familiar with the deal said Saturday, April 25, 2020, the Niners will send a fifth-round pick in this year’s draft and a 2021 third-rounder to acquire Williams. (AP Photo/Andrew Harnik, File)

A year ago, the Los Angeles Rams were fresh off a Super Bowl trip and back-to-back NFC West titles, feeling good about where they stood in the division.

Now they seem to be looking up at the competition in the NFL’s toughest division. While the Rams got rid of cornerstone players Todd Gurley and Brandin Cooks because of bloated contracts and dwindling production, their counterparts got stronger.

Arizona got promising second-year quarterback Kyler Murray one of the game’s most talented receivers, acquiring DeAndre Hopkins from Houston. It then landed a top defensive player in the draft in do-everything Isaiah Simmons.

Seattle has added complementary pieces and will always be a threat with Russell Wilson at quarterback.

The defending NFC champion 49ers filled two big holes in the first round when they drafted defensive tackle Jevon Kinlaw and receiver Brandon Aiyuk. Then coach Kyle Shanahan was able to replace retiring six-time Pro Bowl left tackle Joe Staley with seven-time Pro Bowler Trent Williams — at a cost of only a pair of mid-round picks.

“Oh yeah, I couldn’t be happier about one of the better players at that position going to a division opponent,” he said sarcastically. “So fired up for the 49ers. You know, it’s really great for them. I’m really happy for the Cardinals to get DeAndre Hopkins. But other than that, thanks for reminding me I need to go drink a couple more beers.”

The NFL’s best division has gotten better after posting a .602 combined winning percentage, tied for sixth highest for any division in the current eight-sector format that began in 2002. That’s nothing new for the NFC West, which has had the best record of any division over the past nine seasons, with five of the past eight NFC champions.

The 49ers wanted to keep as many of the pieces from last year’s NFC champions as possible. The three main players lost were big ones: star DT DeForest Buckner traded to Indianapolis, receiver Emmanuel Sanders leaving in free agency for New Orleans, and Staley retiring.

They believe they found capable replacements in Kinlaw, Aiyuk and Williams.

“We feel we should’ve won the Super Bowl last year and we want to have an opportunity to win it again,” Shanahan said. “So, every decision we made was also with how do we help this organization for the future? But it still feels like we’re in a position to be the same team, if not better this year than we were last year. ... It was a challenge, but when it’s all said and done, it was fun and I like the decisions we’ve made.”

Seattle’s priority in free agency and the draft largely centered on the offensive line. At one point, after drafting Damien Lewis in the third-round, Seattle had 19 O-linemen on its roster. Then veterans D.J. Fluker and Justin Britt were released, clearing $12 million in salary cap space. But the overhaul will mean Seattle has three or four new starters on its line.

The Seahawks also landed a presumptive new starter in the secondary, trading for Quinton Dunbar with Washington, and believe they could have a starting linebacker in first-round pick Jordyn Brooks. They could still use another edge rusher even after signing veterans Benson Mayowa and Bruce Irvin, and drafting Darrell Taylor and Alton Robinson. They could bring back Jadeveon Clowney or sign Everson Griffen.

The Rams' push for a title came with a price. They have significant dead money cap tied up in Cooks, traded to Houston, and Gurley, cut and now in Atlanta. Throw in the first-round pick they gave up last season to acquire cornerback Jalen Ramsey and the Rams had little ability to make significant improvements on a roster that went from the Super Bowl in the 2018 season to out of the playoffs last season.

Few teams have had as successful an offseason on paper as the Cardinals, 5-10-1 in the debut season for coach Kliff Kingsbury and Murray. Arizona added a dynamic receiver in Hopkins, which should help unleash the passing game. Running back Kenyan Drake stayed and will team with intriguing seventh-rounder Eno Benjamin. Offensive Rookie of the Year Murray should have more time to throw thanks to LT D.J. Humphries and rookie Josh Jones, surprisingly still available in the third round.

Arizona added three potential defensive starters in free agents LBs Devon Kennard and De’Vondre Campbell and DL Jordan Phillips. The biggest boost could come from Simmons, the Clemson standout who has shown the ability to shine in coverage, as a blitzer and against the run.