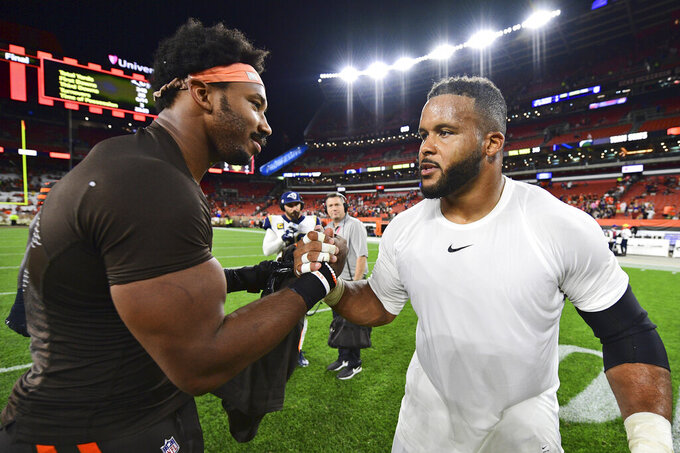 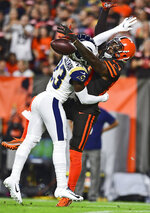 The Los Angeles Rams receive plenty of accolades for their offense, but the defense is what really has stood out the past two games.

One week after holding New Orleans without a touchdown, the Rams put up an impressive goal-line stand late in the fourth quarter of their 20-13 victory over the Cleveland Browns Sunday night.

The Rams were backed up to their 4 and facing first-and-goal before forcing Browns quarterback Baker Mayfield to throw four straight incomplete passes .

"It was really just a great job by them. I just thought to be able to re-gather themselves," McVay said. "Four straight downs and fighting through it, especially with Baker's ability to be able to extend plays, and some of the athletes that they do have. It was just incredible. It showed great mental toughness, and for them to be able to close it out was outstanding."

The Rams are ranked third in the league in total defense and fourth against the pass after three games.

Safety Eric Weddle isn't ready to proclaim his unit as the best in the league, but it is making a strong case.

"No plays up the field, that's what we pride ourselves on. Communicate, put yourself in the right position to take away those dangerous threats, and make them work for every inch," he said.

LB Clay Matthews has a sack in each of his first three games with the Rams. On a night when his father was inducted into the Cleveland Browns Ring of Honor, Matthews recorded his first multi-sack game in two years.

It is the second time in his 11-year career that Matthews has started the season with a sack in three straight games.

The Rams were very effective in generating pressure with a four-man rush out of their dime package. Opposing teams already have a handful in trying to double-team Aaron Donald, but that also allows opportunities for Matthews and Dante Fowler Jr. to make plays.

Finding someone besides Todd Gurley to carry the football. Malcolm Brown had only 7 yards on three carries as the Rams look to manage Gurley's carries throughout the season.

Los Angeles had only one carry over 10 yards on Sunday, only the fifth time in McVay's three seasons the Rams have been held to one or fewer double-digit gains on the ground.

"It was tough to get us into a rhythm, and it starts with me," said McVay of the run game. "I keep saying it. I can't keep sitting up here and saying the same thing. I have to find a way to get it fixed and be better for our football team."

Donald had only one sack but he continues to create havoc on opposing offensive lines.

He was able to consistently beat double-teams by the Browns and pressure Mayfield. Donald was angry about a roughing-the-passer call late in the fourth quarter, but he seems to be on the cusp of having another run of sacks in coming weeks.

Right guard Jamil Demby, starting in place of the injured Austin Blythe, was called for two false start penalties and got beaten for a sack during the second quarter.

The Rams got out of the game without any additional significant injury. They were without tight end Tyler Higbee (bruised lung) and Blythe (ankle) for the Browns game.

13 — Touchdown passes Jared Goff has thrown to Cooper Kupp, the most of any Rams receiver. Kupp had two TDs vs. the Browns, marking his second career game with multiple scores.

The Rams have two games over an 11-day stretch. They host Tampa Bay on Sunday before going on the road for a Thursday night game at Seattle on Oct. 3. Los Angeles is 9-1 in September games under McVay.