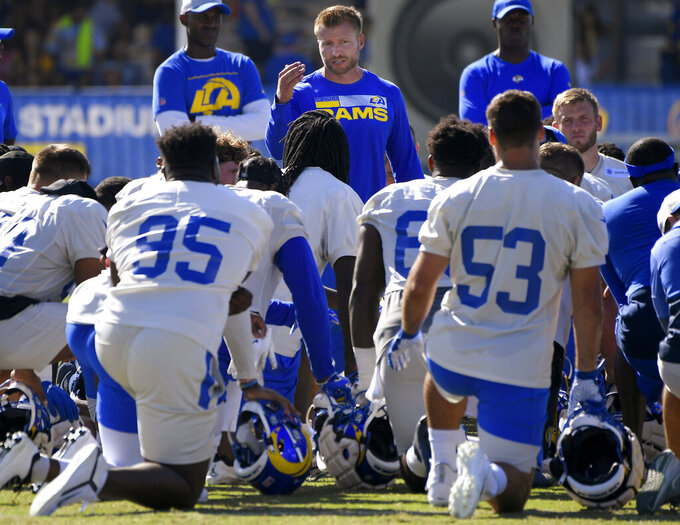 IRVINE, Calif. (AP) — Just when it seemed as if the Los Angeles Rams had their starting offensive line figured out, there is now uncertainty in the middle of the front five.

Rams coach Sean McVay said Brian Allen would see more time at center with the first unit going forward, with Austin Corbett sliding over to guard after lining up almost exclusively at center during offseason workouts and at the start of training camp.

“We’re still in the middle of evaluating what does it look like, to figure out that best combination of those five guys up front, but the way that Brian’s played consistently throughout camp. … We know also Corbett can be a really good right guard. It’s really a reflection of how well Brian’s played, and we’re going to continue to evaluate,” McVay said Monday.

The Rams have to replace Austin Blythe, who helped stabilize the line by moving to center last season but left in free agency to sign a one-year contract with Kansas City in March.

Allen was selected in the fourth round of the 2018 draft with the idea that he would be the successor to veteran John Sullivan. The Michigan State product effectively took a redshirt year behind Sullivan that season, appearing in 13 games without making a start.

Allen took over at center in 2019, starting nine games before sustaining a major knee injury in which he tore his ACL, MCL and meniscus and broke his tibia. It was a long and challenging recovery, which was exacerbated when Allen tested positive for COVID-19 in April 2020.

“If you look at Brian Allen, he looks physically impressive,” McVay said. “He’s strong, he’s sturdy. You can see all the work that he’s really put in, and I think you can see he’s feeling really good being another year removed from that knee injury.”

The increase in reps for Allen comes after the Rams held a joint practice with the Dallas Cowboys on Saturday in Oxnard, California. Corbett struggled at times playing center in that workout, one McVay criticized for a lack of cohesion from the offense.

“We’ve got enough guys that have played a lot of football that I want us to be sharper in our overall execution from one snap to the next,” McVay said. “We might have a good play, but the good offenses, they consistently stack good plays after one another, and I didn’t think we did as good a job as I expect us to do.”

McVay said the Rams will continue to experiment with Allen and Corbett at center for their final practice at UC Irvine on Tuesday before returning to their facility in Thousand Oaks, California, for the rest of the preseason, “whether it’s a 60-40 split or 50-50.”

Corbett has started 23 games at guard for Los Angeles since being acquired in a trade from Cleveland in October 2019.

Another potential option, Coleman Shelton, is dealing with a toe injury, McVay said. Shelton, who is going into his third season out of Washington, got some work at center in the spring.

While McVay would like to figure out the position as quickly as possible, he doesn’t believe any delay to determine the best option will bother starting quarterback Matthew Stafford.

“We’re still early and we haven’t had as many opportunities as you’d like to put the pads on, especially for those guys up front,” McVay said. “But I think Matthew’s got a good rapport with both of those guys. Definitely don’t minimize the importance of it, but what you feel really good is we’ve got two guys that we feel confident can start at center for us.”

NOTES: DL Sebastian Joseph-Day did not practice Monday after sustaining an ankle injury in the joint workout with the Cowboys. McVay said Joseph-Day’s absence was largely precautionary. … OLB Terrell Lewis did not practice because his knee is “acting up again,” McVay said. Lewis, who tore his ACL in 2018 at Alabama, was limited to eight games as a rookie because of ongoing issues with his knee and an ankle injury.