Rams have 'humbling' night vs. 49ers after going 'all-in' 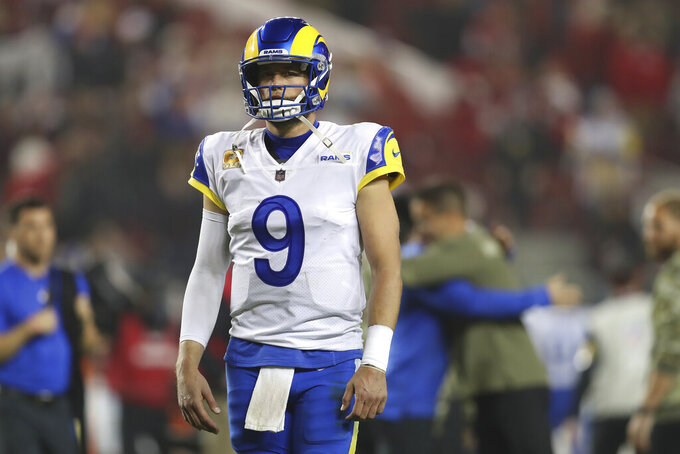 SANTA CLARA, Calif. (AP) — The Los Angeles Rams publicly proclaimed themselves as “all-in” after acquiring Von Miller just before the trade deadline and then followed that up by signing Odell Beckham Jr.

Those two high-profile stars didn't help them reverse their fortunes against the division-rival San Francisco 49ers and now the once high-flying Rams head into their bye week searching for answers following their worst two-game stretch in five seasons under coach Sean McVay.

Two early interceptions by Matthew Stafford put Los Angeles in a big hole and then dropped passes and a defense that got overpowered by San Francisco did the rest in a 31-10 loss to the 49ers on Monday night.

“This was a humbling night for us as a team, and a great opportunity for us to be able to take a deep breath, step away, look at the things that we need to correct, particularly offensively over the last couple of weeks," coach Sean McVay said. “We’re going to figure this thing out and we’re going to come back ... swinging, I promise you that, these last seven games of the regular season.”

The Rams (7-3) have fallen flat the past two weeks, getting outscored 59-26 in losses to Tennessee and San Francisco, the first time they dropped back-to-back regular-season games by double digits since McVay arrived in 2017.

The offense has stumbled with Stafford throwing a pair of interceptions, including one returned for a TD, in both losses as the Rams look nothing like the offense that was averaging 30.6 points per game during the 7-1 start.

“I can definitely be better in all aspects,” Stafford said. “We just didn’t do well enough on the offensive side to keep us in it.”

Now the Rams get a week to regroup before a showdown on Nov. 28 at Green Bay. It will give them time to acclimate Beckham and Miller to the team and also figure out how to handle the loss of versatile receiver Robert Woods, who went down with a season-ending knee injury in practice last week.

Beckham got the start in his debut and caught a 5-yard pass on the first play from scrimmage. But he and Stafford weren't on the same page later that drive when Stafford launched a deep ball that went right to safety Jimmie Ward for an interception.

Beckham caught only one other pass as he played only a few days after joining Los Angeles.

“It is going to be a tough road,” Beckham said. “These moments don't divide you. They get you stronger and closer together and I am happy to be here. Over the bye week, I'll be able to get into the playbook and really try to learn every single thing possible.”

The second drive also ended with a turnover and tight end Tyler Higbee bobbled a pass from Stafford right into the hands of Ward, who returned it 27 yards for a TD that made it 14-0.

That was one of several drops on the day, including key ones on third down by Higbee and Cooper Kupp later in the game.

“You have to go execute," Stafford said. “We didn’t do it on offense and didn’t help our defense out early. And then really had some chances in the third quarter to climb back in it and didn’t get it done. So that’s what it comes down to, blocking, throwing, catching, running, all those sort of things. The fundamentals. We have to do them better.”

Miller finished with three tackles but got little chance to rush the passer as San Francisco ran teh ball 44 times.