Rams humbled by Niners; flaws exposed on both sides of ball 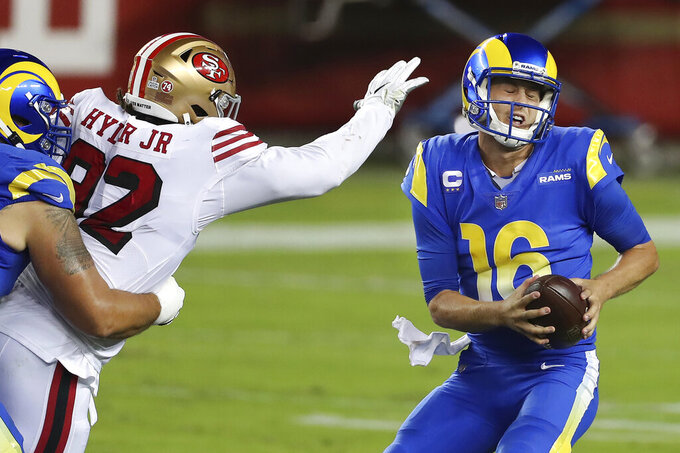 LOS ANGELES (AP) — Sean McVay's Los Angeles Rams have always been a fairly resilient bunch that managed to rebound from setbacks with renewed passion and no lack of faith in their fundamental principles.

They'll need that resilience after opening NFC West play by taking a thrashing from a rival.

The Rams lost 24-16 to the San Francisco 49ers on Sunday night in a game that never felt as close as the score. McVay's offense managed only 102 yards in the first half and struggled to score all night, while Brandon Staley's defense gave up a whopping 291 yards and three touchdowns before halftime.

Add in another mediocre game on special teams, and the Rams (4-2) are looking for answers everywhere during this upcoming week of preparation for “Monday Night Football.”

“Guys are pretty disappointed right now,” linebacker Micah Kiser said Monday. “But we're a close team. Guys are all bought in and just ready to get back to work.”

The Rams had a similar wake-up call early last season when an unimpressive Tampa Bay team routed the 3-0 Rams at home, and they didn't respond to it very well. That loss began a three-game skid for Los Angeles in its 6-7 finish to McVay's first non-playoff season.

After this third straight loss to Kyle Shanahan and the Niners, the Rams must figure out why they've trounced the entire NFC East this season, but come up short against their two toughest opponents in Buffalo and San Francisco.

The problems on offense in Santa Clara were headlined by a 19-for-38 performance from Jared Goff — although the mistakes weren't all his fault, most notably a dropped touchdown pass by Cooper Kupp that could have changed the game.

“I absolutely felt like it was going to happen all night,” Goff said of the Rams' comeback. “We had our chances. ... We’ve got to finish off drives. We’ve got to make better decisions. We’ve got to throw and catch a little bit better, and we will. We usually do, and we know we will coming out next week.”

The Rams' running game was productive when McVay deigned to use it. Darrell Henderson continued to produce the best numbers in the Rams’ three-man group, racking up 88 yards on just 14 carries. But McVay ran the ball only nine times on 21 plays in the first half, curiously relying on the passing game while Goff and his receivers were struggling.

Aaron Donald’s 100th career game was an evening to forget for the Rams’ pass rush, which led the NFL with 20 sacks entering the weekend. With Jimmy Garoppolo limited by a bad ankle, the 49ers ran the ball, used short dropbacks and played with a lead for more than 56 minutes. It all added up to zero sacks for Donald and the Rams. They didn’t even generate a quarterback pressure from their edge rushers.

At least the defensive line was strong against the run, allowing 3.3 yards per carry. The Rams are near the middle of the NFL pack on run defense, but they showed progress. The Rams' overall defense also improved after halftime, as has been its custom under Staley.

Kupp is an elite receiver, but he made a huge mistake when he dropped a surefire touchdown pass from Goff late in the third quarter. Kupp and Goff also got crossed up on a long pass that should have gone for a huge gain in the second half after Kupp broke through San Francisco's coverage.

Kiser returned from a one-game absence with a groin injury and made 13 tackles, sharing the team lead with S John Johnson.

97 — The estimated yards after catch by San Francisco's Deebo Samuel. The Niners barely threw downfield all night, but Samuel and his teammates racked up big gains through persistence and clever misdirection plays that capitalized on the Rams' over-pursuit at times. The Rams also gave up 73 yards after the catch to star tight end George Kittle. Opponents watched everything drawn up by Shanahan, and they'll be eager to use it.

The NFC North-leading Chicago Bears (5-1) visit SoFi Stadium on Monday night for the Rams' third home game of the season. The Bears famously beat the Super Bowl-bound Rams in the ugliest game of Goff's career in late 2018 in the freezing cold, but the weather should be a bit better in Inglewood.