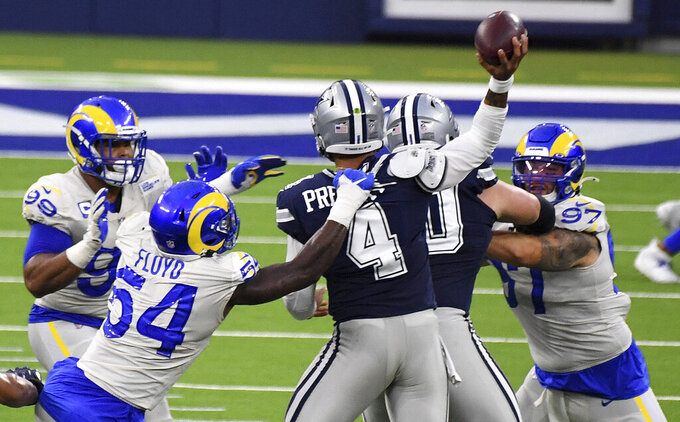 Outside linebacker Leonard Floyd (54) of the Los Angeles Rams pressures quarterback Dak Prescott (4) of the Dallas Cowboys in the first half of a NFL football game on opening night at SoFi Stadium in Inglewood on Sunday, September 13, 2020. (Keith Birmingham/The Orange County Register via AP)

THOUSAND OAKS, Calif. (AP) — Leonard Floyd knew almost nobody on the Los Angeles roster when he joined the Rams as a free agent in April, and the coronavirus-shortened offseason made it even tougher for him to get to know his new teammates.

Yet after training camp and three games with the Rams (2-1), Floyd already seems to be fitting in splendidly with his new team. Everybody also seems confident that Floyd's solid early-season numbers will get even better as the outside linebacker gets more comfortable in the scheme and in Southern California.

“I learned that we’ve got a great group of guys on all levels of the defense,” Floyd said Friday. “We haven’t even had our best game yet, and we’re trying to put that together. We’re continuing to come in every week and working toward that, trying to play our best game as a defense. Hopefully we get that this week.”

Floyd and the Rams will face the New York Giants (0-3) on Sunday at SoFi Stadium with the opportunity to continue a fast start to their fourth season under coach Sean McVay.

Floyd already has two sacks in the Rams' first three games, along with four quarterback hits and two tackles for loss. Those two sacks are more than he managed in his final 14 games combined with the Chicago Bears, who drafted him in the first round in 2016 before releasing him last spring.

Floyd is excited about his personal start, and about the Rams' winning potential after playing his first four years in Chicago without a playoff victory. Yet he also recognizes the opportunities he missed during those first three games, and he realizes his work is only beginning.

“It’s just telling me that I need to continue working hard and getting better every week,” Floyd said. “Just keep going out there and playing at a high level for this team and trying to help us win. I’m going to try to do whatever it takes to help us do that.”

Brandon Staley saw a prodigiously gifted athlete who could excel if put in positions to succeed alongside All-Pro defensive tackle Aaron Donald. The Rams also have a history of getting impressive performances out of their veteran acquisitions throughout McVay's four-year tenure.

Left tackle Andrew Whitworth and receiver Robert Woods have been fundamental core players ever since they arrived with McVay in 2017, while other veteran acquisitions ranging from receiver Brandin Cooks to safety Eric Weddle to pass rusher Dante Fowler have performed splendidly when they pulled on horned helmets.

“It starts with the player, but I would also like to think that there’s an atmosphere and an environment that’s conducive to them being able to reach their highest potential with the coaches that they’re working with,” McVay said. “We try to cultivate an atmosphere where there’s a mutual respect, and it’s about putting our arms around these guys and helping them reach their highest potential.”

Fowler liked the Rams so much that he re-signed with the team on a one-year deal in 2019 after reaching the Super Bowl. Fowler then turned his 1 1/2 seasons in Los Angeles into a lucrative free agent deal with the Falcons.

Floyd essentially took over the role vacated by Fowler as the veteran pass-rushing specialist on a defense that retained many characteristics of last season's schemes under former coordinator Wade Phillips. Staley is working on new ways to employ Floyd's unique skill set, including his impressive work in pass coverage for a 6-foot-6 linebacker.

McVay also said he sees Floyd working on the fine details of playing alongside Donald, such as “working on your four-man rush principles on the same side as somebody, and being able to play off them based on if Aaron gets penetration up the field, and making sure we keep the integrity of our rush lanes. There's a lot of things that go into that. Repetition is the best way.”

Donald's presence is a boon to any pass rusher, but Donald is also impressed by his new teammate's skills.

“He’s stout in the run, and then when it comes to the pass rush, he’s got good technique,” Donald said. “He knows how to work different things, change up his rushes, and he’s taking advantage of that and he’s making plays. That’s what is expected. That’s why he’s here and hopefully he will continue to do that.”

NOTES: Rookie RB Cam Akers will miss his second straight game this weekend with separated rib cartilage, McVay said. Akers started the Rams' first two games, but hasn't been able to practice this week. ... Rookie S Jordan Fuller is questionable for Sunday with a shoulder injury. He was limited in practice all week. Fuller surprisingly won a starting job in Week 1 over second-year pro Taylor Rapp, who took over for him in Buffalo. McVay isn't sure how much Fuller will be able to play if he's active Sunday.