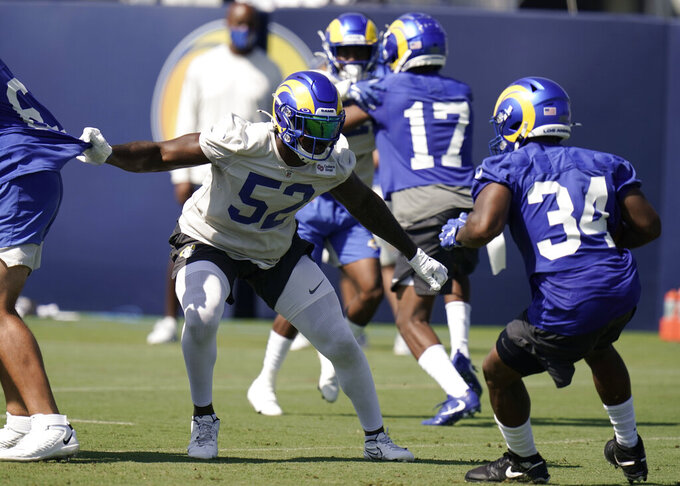 THOUSAND OAKS, Calif. (AP) — Linebacker Terrell Lewis will miss at least the first three weeks of his rookie season with the Rams due to a right knee problem that isn't as serious as Los Angeles first feared.

Lewis will start the season on the non-football injury list, Rams coach Sean McVay said Wednesday as they began practice to face the Dallas Cowboys on Sunday night in SoFi Stadium's inaugural game.

"It’s as positive as it could be, given the circumstances," McVay said.

According to McVay, the Rams were concerned Lewis had an infection caused by previous surgery on his knee, which was badly injured during his college career at Alabama. The Rams eventually determined Lewis doesn't have an infection, but will still need to recover for a few weeks before his NFL debut.

“He had some atrophy from the procedure that we had to do,” McVay said of the investigative knee procedure, which was done about 10 days ago. “There's just so many different layers to it.”

Because Lewis was on the Rams' active roster at the start of this week, he must only sit out three weeks on the NFL list, rather than six weeks.

Lewis was a third-round pick by the Rams after a four-year career at Alabama in which he played an important role only in 2019. After playing sparingly as a freshman in 2016, Lewis missed 10 games in 2017 with an upper-arm injury, and he missed the Crimson Tide's entire 2018 season due to a knee injury

The Rams still took a chance on Lewis because of his impressive physical skills and pass-rushing potential. Los Angeles must replace departed pass rushers Dante Fowler and Clay Matthews from last season's defense.

The Rams are replacing Lewis on the 53-man roster with running back Raymond Calais, who was claimed from the Tampa Bay Buccaneers' practice squad last weekend.

The Rams loved Calais' speed and versatility coming out of Louisiana-Lafayette, but Tampa Bay drafted him in the seventh round. When the Bucs signed Leonard Fournette and chose Jaydon Mickens as their return man, Calais didn't have a 53-man roster spot, allowing the Rams to pounce.

“He's got explosion,” McVay said of Calais. “Anytime that you’ve got one of those elite traits with that speed, you’re going to get an opportunity.”

McVay remains hopeful running back Darrell Henderson will be ready to play Sunday after missing most of training camp with a hamstring strain. The Rams intend to replace Todd Gurley with a three-man tandem of running backs: veteran Malcolm Brown, rookie Cam Akers and Henderson, a second-year pro.