Rams' McVay: Gurley's workload is "me not being an idiot" 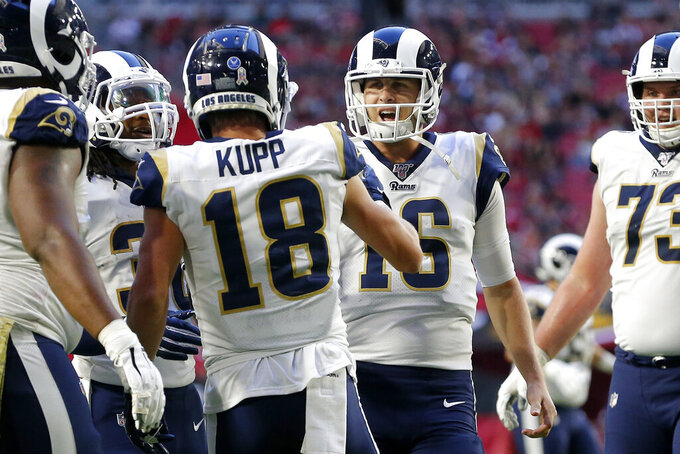 THOUSAND OAKS, Calif. (AP) — Todd Gurley's light workload was the most baffling aspect of the first half of the Los Angeles Rams' season.

Now that the star running back's activity is picking up while the Rams (7-5) desperately chase a playoff spot, coach Sean McVay has identified the prime factor behind Gurley's rebound.

“Me not being an idiot,” McVay said Wednesday.

McVay repeatedly claimed early in the season that his sparing usage of Gurley wasn't due to a lingering knee injury or a desire to prevent his high-priced star from getting worn down early. Instead, McVay constantly said he was using Gurley in a rotation that would give Los Angeles its best chance to win.

His explanation was greeted with raised eyebrows by Rams fans who figured they had the best chance to win with the ball in the hands of Gurley, one of the NFL's top running backs in his first four seasons.

In their first eight games this season, the Rams' franchise running back never touched the ball more than 20 times. Gurley sat out long stretches while sharing snaps with backups Malcolm Brown and rookie Darrell Henderson, and he didn't produce a 100-yard rushing game.

Gurley still hasn't gone for 100 yards this season, but he is taking a bigger role in McVay's game plan. In three of the Rams' last four wins, Gurley touched the ball at least 19 times, including his 95-yard rushing performance in the Rams' 34-7 win at Arizona last weekend.

“You don’t want to make the same mistakes that you ended up making earlier on in the season,” McVay said. “I think he’s done a nice job handling a bigger workload, but then also you do have confidence in those other guys if they need to give him a spell.”

McVay on Wednesday again denied he was resting Gurley for later in the season, perhaps believing the defending NFC champions could get back to the playoffs without a potentially draining workload for his star ball-carrier. Instead, the Rams are stuck in third place in the NFC West behind Seattle and San Francisco, two of the league's top teams.

“You're just kind of working through the best way to utilize all of our players and figuring out what our best identity is,” McVay said. “I think we're still working through it, but (load management) didn't have anything to do with that. Shoot, we’re just trying to win a game, so certainly it wasn’t ever with the mindset of looking ahead before anything was accomplished.”

Heading into a Sunday night visit from the Seahawks (10-2), Los Angeles is one game behind Minnesota (8-4) for the second NFC wild card spot with four games to play.

The Rams' narrow loss in Seattle earlier this season was the only one of their five defeats in which Gurley made a significant impact. No matter the reason, his relative absence from their losses has baffled many fans and some of his teammates.

“He’s being hard on himself,” Rams quarterback Jared Goff said when told about McVay's self-blaming for Gurley's inactivity. “I think we all want to get Todd involved as much as possible. I think these last couple of weeks we’ve seen that, and good things tend to happen.”

The most frustrating Gurley game this season was Los Angeles' 17-12 defeat in Pittsburgh last month in which Gurley inexplicably didn't touch the ball in the fourth quarter, watching from the sideline while Brown played with the first-team offense.

McVay blamed himself for that bizarre substitution pattern one day after the game, saying he wished he had changed the normal rotation. He didn't explain how any rotation or pattern could have been in place that kept his $60 million tailback on the sideline for two straight series in the fourth quarter of a one-possession game.

“I think there’s some instances where you look back and it’s always hindsight in terms of what can you do,” McVay said. "I think the Steelers game stands out in terms of where we were running the football well and didn’t really give him a chance to get back going based on how that thing played out. So you always try to learn from your previous experiences. ... I think we’ve been able to, in the games that he’s gotten more touches, be efficient when we’ve been able to give him the ball. That’s a reflection of him, but also the guys blocking.”

NOTES: The Rams didn't practice Wednesday after a major rainstorm doused their outdoor training fields. They held a walkthrough instead. ... McVay is uncertain whether TE Gerald Everett will be able to play against Seattle after missing last week's game with a knee injury. ... RT Rob Havenstein also isn't certain to play after sitting out two games with a knee injury.