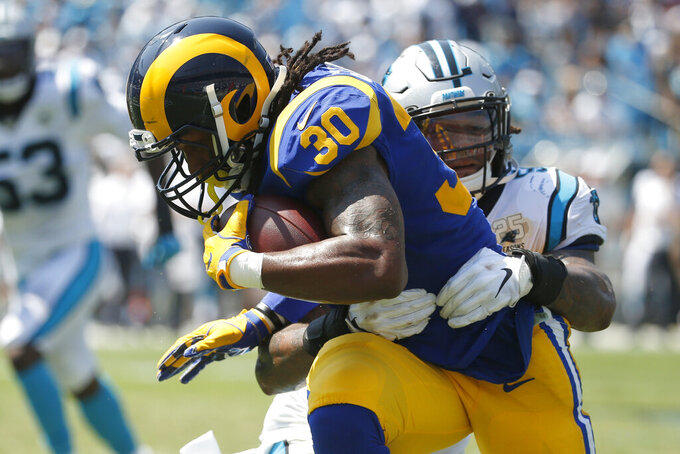 THOUSAND OAKS, Calif. (AP) — For an offense that values continuity, the Los Angeles Rams had no problems bringing two inexperienced linemen into the fold.

Coach Sean McVay was pleased by center Brian Allen and left guard Joe Noteboom during the Rams' 30-27 win at the Carolina Panthers on Sunday. The second-year pros opened the way for 166 yards rushing with an average of 5.2 yards per carry.

Allen and Noteboom both made their first career starts after the Rams did not re-sign veterans John Sullivan and Rodger Saffold.

"I thought they were really productive," McVay said Monday night. "Took us a little bit to get going offensively, but once we settled in I thought the removal that we got in the run game, the way they protected for the most part, was really a great job by those guys."

Allen was just as effective in handling the mechanics of his position, such as calling out protections. The Rams were not flagged for any false start or delay of game penalties, and Allen was even able to help quarterback Jared Goff get Panthers defensive tackle Gerald McCoy to jump offside on a key third down in the third quarter.

"He and Jared, their rapport continues to grow, and to be able to do it in a game that actually counts and be able to evaluate him, especially against the caliber of players and the structure of defenses that coach (Ron) Rivera was activating, we were really pleased with Brian," McVay said. "I would say we're proud of the performance, excited about it, but not surprised."

For all the concern about Todd Gurley's knee, the Rams showed they can still run the ball with their star back leading the way. Gurley had 64 yards rushing on 10 carries in the fourth quarter, finishing with 97 yards on 14 attempts. But it will be more of a committee effort this season to keep Gurley healthy. Malcolm Brown added 53 yards rushing and two short touchdowns as the main back near the goal line.

The usually solid Rams special teams had an off day, with Greg Zuerlein missing a late field goal and return specialist JoJo Natson fielding a punt inside his own 5. Punter Johnny Hekker could have done more for the brand, as his first boot of the season traveled 7 yards. Hekker also had a punt blocked to set up a touchdown run by Christian McCaffrey.

Outside linebacker Dante Fowler Jr. sacked Cam Newton twice, matching his seven-game total with the Rams last year after being acquired from Jacksonville in a midseason trade. Fowler said having a whole offseason to understand the nuances of defensive coordinator Wade Phillips' system helped him to get off to a fast start. "It's a big, huge difference just being in the system," Fowler said Monday. "When I first came in, it was like I had four days to get ready, learn a whole new playbook."

Fresh off signing his record-setting contract extension, Goff wasn't particularly sharp against the Panthers. Goff threw for 186 yards and one touchdown with one interception, and just five of his 23 completions gained at least 10 yards.

Safety Eric Weddle is in the concussion protocol after sustaining a cut to his head caused by an errant knee from McCaffrey. McVay said Weddle did not have any symptoms of a concussion Monday and that the 13-year veteran would prepare this week as if he will play Sunday.

.824 — The Rams are 14-3 on the road in the regular season since McVay took over as coach in 2017, the best winning percentage in the NFL during that span.

A rematch of the controversial NFC championship game against New Orleans (1-0) is on deck in the Rams' home opener on Sunday. Fowler said he would be watching the Saints on Monday night, and the Rams will need plenty of pressure from him, Clay Matthews III and Aaron Donald to keep quarterback Drew Brees in check.