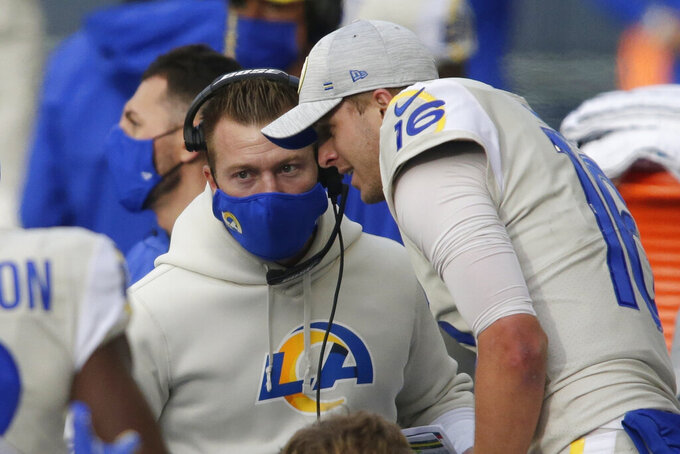 FILE - In this Dec. 27, 2020, file photo, Los Angeles Rams quarterback Jared Goff talks with coach Sean McVay on the sideline during the first half of the team's NFL football game against the Seattle Seahawks in Seattle. One after another, quarterbacks once believed to be franchise cornerstones after being top five picks changed addresses this offseason in staggering succession. Matthew Stafford and Goff switched teams in a swap of former No. 1 overall picks. (AP Photo/Scott Eklund, File)

LOS ANGELES (AP) — The Rams' most recent first-round draft pick was Jared Goff, and that was way back in 2016.

They aren't scheduled to have another first-round pick until 2024, when Goff will be over three years removed from his last snap for Los Angeles.

General manager Les Snead does not exactly adhere to conventional wisdom when building a roster, and coach Sean McVay has never had a big-name rookie talent in his lineup. Their system isn't typical, but it's clearly working for the Rams, who have racked up four consecutive winning seasons, three playoff berths, two NFC West titles and one Super Bowl trip during their partnership.

So while Thursday likely will be quiet at the Rams' draft headquarters in Malibu, that's only because the Rams made all their noise several weeks, months and years ago.

The Rams' first-round pick this year belongs to Jacksonville as part of the trade that brought Jalen Ramsey to Los Angeles. Ramsey rewarded the Rams' vision by earning All-Pro honors last season as arguably the top shutdown cornerback in the NFL, becoming a leader of the league's No. 1 defense.

Los Angeles' first-round picks in the next two seasons belong to the Lions after the trade that sent Goff to Detroit for Matthew Stafford. McVay is confident his new quarterback is a big upgrade who will put the Rams closer to a Super Bowl return — perhaps this season, when the big game will be at SoFi Stadium.

That doesn't make for much excitement on draft day, but the Rams hope they can make up for it in February.

The Rams still have needs to fill in their draft, which will begin for them Friday in the second round with the 57th overall pick. Los Angeles also needs to hit on its choices because it only has six this year, including two in the third round and none in the fifth.

Among the Rams' biggest needs is a starting center after Austin Blythe left for Kansas City in free agency. Although Brian Allen and other offensive linemen on the roster could fill the spot, several quality prospects should be available with one of the Rams' highest picks.

Los Angeles also must replace four defensive starters, at safety, cornerback, outside linebacker and on the defensive line after three free-agent losses and a trade. While internal candidates will lead the race, the Rams are likely to look hard at a defensive back with a high pick — or with a later pick, as they did last year in unearthing Jordan Fuller, who started all 12 of his games at safety after the Rams nabbed him with the 199th overall selection.

The Rams already addressed their need for a deep-threat receiver with the addition of free agent DeSean Jackson, but a speedy kick returner who could double as a wideout is also an area of need.

Los Angeles has two third-round picks, including a compensatory selection, along with a fourth-round compensatory choice and the Rams' own selections in the sixth and seventh rounds.

The Rams have taken draft week out of their training complex in Thousand Oaks and into a 9,000-square-foot coastal mansion in Malibu. They're the only team this season that will make its selections outside the team's normal headquarters.

The splendid ocean views will find their way onto television and onto the Rams' social media platforms. They've also already inspired good-natured ribbing from the likes of Arizona coach Kliff Kingsbury, who jokingly accused McVay of plotting the move to show off his shirtless physique in the Malibu mansion's infinity pool.