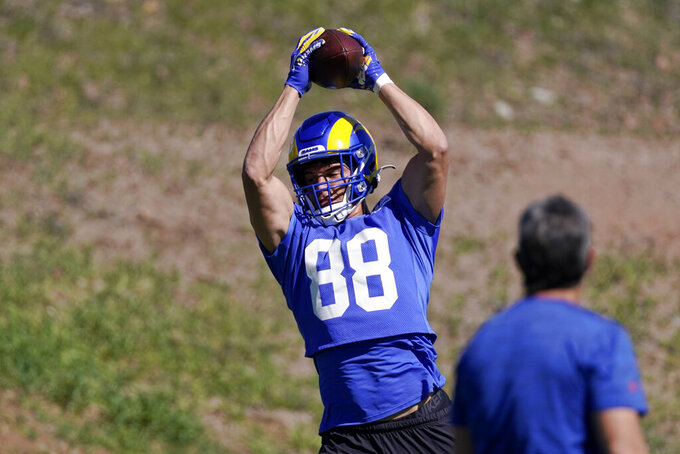 The move was expected for Higbee, who hasn’t practiced since being injured in the NFC title game. Noteboom practiced on a limited basis on Wednesday and Thursday, but was a non-participant on Friday.

There were no setbacks for running back Darrell Henderson and defensive linemen Sebastian Joseph-Day. Rams coach Sean McVay said both will be activated from IR.

“They’ll be ready to go,” the coach added.

Friday’s work was conducted under balmy, 82-degree conditions. The wind that was problematic earlier in the week, forcing McVay to move practice to the Rose Bowl on Thursday, was not a factor and barely noticeable.

“Nice!” McVay said. “The weather cooperated with us. Everything is coming together at the right time.”

With the final hours leading up to the matchup against the Cincinnati Bengals in the wind, McVay summed up the theme to his players.

“Do your last little preparation, but trust your preparation,” he said. “Trust your process. Trust yourself and your teammates. Understand that we have a little time until kickoff. It’s great to be a little excited about it, but just be in the moment.”

The Bengals ended their final practice with red-zone work.

For the majority of their final workout Friday at Drake Stadium on the campus of UCLA, the Bengals stayed inside the 20-yard line as Joe Burrow threw passes to his receivers and his tight ends. Then they tacked on some special teams work before finishing with a huddle at midfield.

“Just trying to follow our routine the best we can in the season,” coach Zac Taylor said. “That’s the routine our guys know. We finish with red zone and then we have about 50 hours until kickoff, and it’s mental from here.”

Friday’s lighter and shorter workout was one of the Bengals’ last tune-ups before the team heads to SoFi Stadium on Sunday morning. And after two weeks of installing the game plan and refining it through meetings and practices, Taylor is confident his team is focused and prepared. He believes these past two weeks of practices, that started at the University of Cincinnati and ended in L.A., have been two of their best all season.

“I feel great,” he said. “I feel like they’ve been focused on the right things. The only important thing is winning this game and feeling like we got out of these practices in a really good spot.”

Part of Taylor’s confidence also related to the team’s health. Tight end C.J. Uzomah practiced for the second consecutive day and is on track to play Sunday, Taylor said. Everyone else on the roster is good to go.

Players had afternoon meetings scheduled following in-person media availability at the Drake Stadium. Then on Saturday, the team has a morning walkthrough before heading down to SoFi Stadium for team photos. Taylor said the team will have a final review of the game plan in the evening.