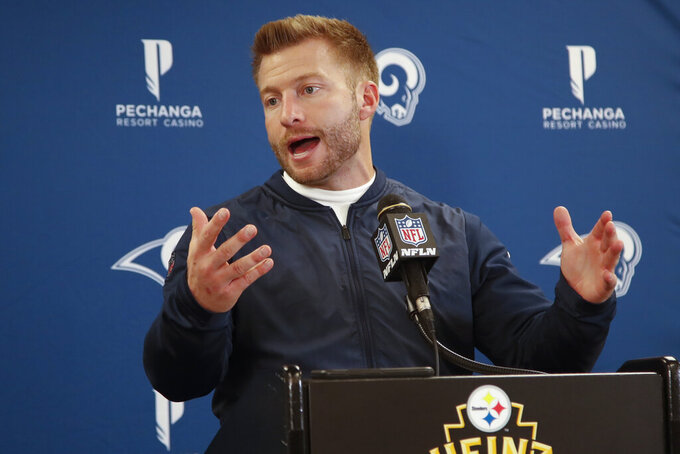 THOUSAND OAKS, Calif. (AP) — The Los Angeles Rams' offensive line is coming apart, and so is their season.

The durable unit that was the bedrock of the Rams' offensive success over the past two years is an injured, inconsistent shadow of its once-dominant self. The Pittsburgh Steelers' defense proved it repeatedly Sunday night in the Rams' 17-12 loss, their fourth in six games overall.

The news got even worse Monday. Center Brian Allen is out for the season after injuring his left knee in Pittsburgh, and right tackle Rob Havenstein will miss at least two weeks with an injured meniscus in his knee.

That means the Rams (5-4) will face the Chicago Bears on Sunday without three offensive linemen who started against San Francisco just four games ago. Guard Joe Noteboom also is out for the season.

"I think it's a great challenge," coach Sean McVay said Monday. "Let's use this as an opportunity to try to see if we can put guys in better spots, and ultimately find a way to win the game as a team."

But the Rams are particularly unequipped to handle this rash of injuries because of their offseason decision to rely on untested youngsters both as new starters and as backups along the line. After two seasons in which no offensive line starter missed a game that mattered, the Rams' decision to press their good luck hasn't worked out — although the line wasn't even playing that well before the injuries mounted.

"It's one thing when you have it happen when you're at a place where you've got a lot of veteran linemen for backups," left tackle Andrew Whitworth said. "Around here, it's a lot of guys that nobody has ever played, so it's a learning process a bunch of different ways."

Rookie David Edwards already moved into the starting lineup at guard after Noteboom went down. Guard Austin Blythe will move to center, but McVay isn't sure how he will fill the gaps at guard and right tackle. Rookie Bobby Evans might get a chance after playing just three offensive snaps all season long.

Allen's injury is particularly brutal, given that the Rams have been adjusting to a new center leading the communication after John Sullivan played the past two seasons at the spot.

"All of a sudden, communication and those little things you take for granted become something that's a lot harder to pull off than you think," Whitworth said. "But you know what? It's not an excuse. It's the reality of the situation, and we've got to work together."

After outscoring the offense in Pittsburgh, the Rams' defense is clearly surging. Los Angeles has given up just 57 points in the past four games. The Rams' defense held the Steelers to 273 yards with six tackles for loss while scoring on a fumble recovery and a safety. The loss of three secondary starters and the midseason addition of Jalen Ramsey have been handled smoothly. Wade Phillips' group is rolling, but overwork generally leads to problems for any defense, and the Rams' offense is providing little help.

The Rams' offensive ineptitude could be measured in many ways, but perhaps the ugliest number was next to receiver Cooper Kupp, who had no catches on just four targets. One game earlier, he had seven catches for a career-high 220 yards against the Bengals in the latest standout performance of his banner season. Even after quarterback Jared Goff and McVay failed to get the ball to Kupp in Pittsburgh, he still ranked fifth in the NFL with 792 yards receiving.

Clay Matthews returned from a three-game absence with a broken jaw and recorded 1½ sacks. Matthews and Dante Fowler are providing a strong pass rush when opponents double-team Aaron Donald. Fowler also scored the Rams' only touchdown on a fumble recovery.

McVay was down on himself after the Rams' inexplicable decision to remove Todd Gurley from the lineup in the fourth quarter of perhaps his most effective performance of a poor year. The Rams have repeatedly insisted they aren't limiting Gurley's carries to preserve his health, but they had Malcolm Brown on the field instead of Gurley for the Rams' first two drives of the fourth quarter. McVay blamed it on a normal player rotation Sunday, claiming he saw nothing strange about having his franchise running back on the sideline.

"Not to take anything away from Malcolm," McVay said Monday. "But if you knew that that was going to be the last possession you get until 2½ (minutes) left, you probably would say, 'I would have preferred to have Todd get into more of a rhythm and maybe get some touches there.' And there's nobody to blame there but me."

Wide receiver Brandin Cooks will miss at least another week while he recovers from his second concussion of the season. Josh Reynolds had three catches for 49 yards while starting in Cooks' spot at Pittsburgh.

5: Greg Zuerlein's total missed field goals this season after his 56-yarder was off target at the halftime gun. That's more than he has missed in any season since the Rams moved to LA.

The Bears visit the Coliseum on Sunday night in another eminently winnable matchup for the Rams, but Chicago's defense is ranked ninth in the NFL.