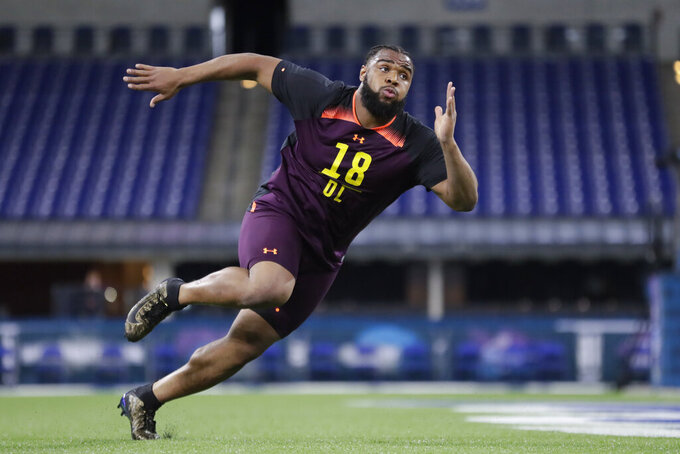 THOUSAND OAKS, Calif. (AP) — Sean McVay led the Los Angeles Rams from the NFL's depths to the Super Bowl in just two seasons, and he did it without a first-round pick in the first two draft classes of his tenure.

The upcoming draft is the Rams' first chance to add a truly elite talent chosen to the specifications of McVay and Wade Phillips. The coaches are eager to see what they can get.

"This will be the first year that we have a first-round pick," McVay said with a grin. "It'll be fun."

Indeed, the Rams have a first-round pick for the first time in three years, even if it's only the 31st overall after their 13-3 regular season.

The previous time the Rams picked in the opening round, general manager Les Snead moved up to snag Jared Goff with the No. 1 overall choice, making a big splash with the club's first draft selection since returning home to Los Angeles.

Although this pick won't be quite so splashy, the Rams have the opportunity and the need to draft a potential starter on either the offensive or defensive line.

The Rams don't have a second-round pick after trading it to Kansas City last season in the deal for Marcus Peters. That means they'll be tempted to move that first-round pick to gain more draft capital, but McVay would love an impact player from this draft after getting just a few major contributors since his arrival.

From the first draft class of his tenure in 2017, the Rams came up with receivers Cooper Kupp and Josh Reynolds, starting safety John Johnson and linebacker Samson Ebukam. Los Angeles didn't have a pick until the third round last spring, and fourth-rounder John Franklin-Myers made the biggest impact as a backup defensive end on the Super Bowl squad.

Here are more things to ponder about the Rams draft:

Suh helped the Rams to the Super Bowl in his only season in LA, but the veteran star didn't always make a significant impact on regular-season games. Suh hasn't signed with another team, but Snead has said he isn't likely to return. That means the Rams need a new space-filler up front in Phillips' 3-4 defense, and this draft is thick with interior defensive line talent. A defensive tackle to play alongside Aaron Donald and Michael Brockers seems like the single most probable selection. Look for such names as Jerry Tillery of Notre Dame and Christian Wilkins of Clemson.

The Rams used their first two picks last season on offensive linemen, and both are in the running for starting jobs this fall. Third-round pick Joseph Noteboom appeared to play well in limited action as a rookie, while McVay spoke highly of fourth-round center Brian Allen. But several top offensive line prospects should be available if the Rams keep their first-round pick, and the right name could be irresistible.

Snead's recent history with first-round picks is pretty solid, although he has had plenty of opportunities while taking over a team that went 13 years without a winning season. He drafted Brockers, Donald, Todd Gurley and Goff in a five-year span, but he also reached for receiver Tavon Austin in 2013 and whiffed on left tackle Greg Robinson with the second overall pick in 2014 — although Robinson's career revival in Cleveland suggests former coach Jeff Fisher's staff might have blown it there.

The Rams could always use another pass rusher, even with Donald returning from a 20½-sack season and Dante Fowler back in the fold alongside newcomer Clay Matthews. Johnson, the 91st overall pick in 2017, is the only defensive player chosen by the Rams in the first three rounds of the past four drafts. With plenty of edge-rushing talent in this draft, don't be surprised if the Rams grab some early.

WHAT THEY DON'T NEED

Unless an elite talent falls through the cracks, the Rams seem unlikely to add a skill position player with their first pick. Aside from the notable loss of late-season addition C.J. Anderson, the NFL's second-most productive offense last season will return six of its top seven rushers and all of its top eight receivers — including Kupp, who will be back from his season-ending knee injury. Los Angeles even signed Blake Bortles as Goff's backup.