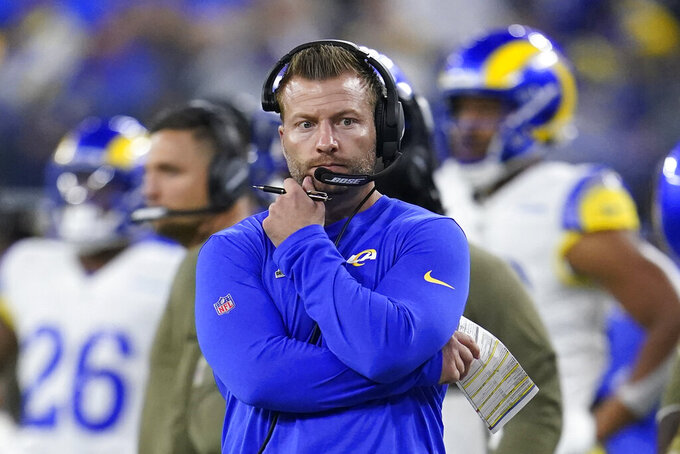 LOS ANGELES (AP) — Sean McVay's emotions were still running high Monday night when he boldly told a phalanx of television cameras and reporters the Los Angeles Rams would “come back freaking swinging” from consecutive losses heading into their bye week.

“I almost said the wrong word there, and you guys would have been really bleeping everywhere,” McVay said with a grin.

After a day to calm down, McVay's message about the suddenly reeling Rams (7-3) was more couched in his usual fluent coach-speak, even if the immediacy of the sentiment remained largely the same.

“They never end the season after 10 games, but we do have to fix some of these things with some urgency,” McVay said. “Guys have to play better. But I think the first thing that I always want people to do in our organization is to look inward.”

When the Rams examine themselves during this bye week, they'll see a team that currently resembles a stunned boxer who just got saved by the bell from imminent danger of a knockout.

The Rams are still a Super Bowl contender simply by virtue of their record and their top-end talent. They have yet to prove they're better than other good teams with the same aspirations — and their performances against Tennessee and San Francisco suggest they might not be what they want to be.

Los Angeles’ first back-to-back losses of the season fortuitously occurred right before the Rams get several days off to heal, to study the playbook — and for the coaches to figure out how to get more out of the wealth of talent at their disposal, particularly newcomers Von Miller and Odell Beckham Jr.

“I know my confidence isn’t lost,” McVay said. “I don’t think our players’ is, but I think what you want to make sure is that you are demonstrating reasons to feel confidence. ... You don’t just show up and say, ‘Yeah, I feel confident.’ You’ve got to actually have some work that goes behind that.”

The Rams’ losing streak has raised fundamental questions about this high-risk, high-reward roster’s capability to handle the big challenges it will face down the stretch of the regular season. That stretch is awfully perilous, featuring three NFC West matchups — the Rams are currently 1-2 in division play — and road trips to Green Bay, Minnesota and Baltimore.

It's a tricky challenge for McVay and his assistants. While the Rams added major talent with their two splashy midseason deals, the acquisitions bolstered two areas where the Rams already were fairly strong while ignoring areas where this roster is visibly less impressive than it was in recent years.

They added Miller to a pass rush that already led the NFL in sacks. They added Beckham to the NFL's most prolific passing offense, although that move retroactively became more vital when Robert Woods was lost for the season to a knee injury on the same day Beckham reported to work.

Los Angeles didn't get an upgrade at defensive back, where opponents have picked on the various unimpressive replacements for nickel back Troy Hill. The team didn't find a new linebacker who can cover receivers better than the starters currently on the roster.

It's too soon to tell whether the Rams' faith in their current players at those positions will be justified — or maybe general manager Les Snead simply wasn't able to find an upgrade and was forced to hope for the best with the talent they've got on hand.

That talent all revolves around Matthew Stafford, whose MVP-caliber season has turned abruptly in the past two weeks.

The veteran quarterback, who threw 22 touchdown passes against four interceptions in the first eight weeks, has thrown two TD passes with four interceptions, seven sacks and a declining completion percentage in the past two weeks.

More importantly, the Rams made just two touchdown drives in the past two weeks — and one of those was in the meaningless final minute of their blowout loss to the Titans.

Stafford threw a pick-6 in the first half of both games, putting the Rams in a hole they couldn't escape. McVay is relying on his quarterback to provide a major upgrade in production this season, and Stafford is publicly unfazed by this bump.

“I’ve got a lot of belief in the guys in that locker room on all sides of the ball to come back and have the right attitude going into the next seven games,” Stafford said. “We'll work the right way and be where we want to be.”

Beckham appears to be determined to put his messy breakup with Cleveland behind him by making an impact for the Rams. After making two catches on 15 snaps in San Francisco, Beckham said he planned to put in “two-a-days” in Thousand Oaks during the bye week because he already "had a baby hiatus” while leaving the Browns.

"It is going to be a tough road," Beckham said. “These moments don’t divide you. They get you stronger and closer together, and I am happy to be here. Over the bye week, to be able to get into the playbook and really try to learn every single thing possible, I know it was quick, but I'm ready.”