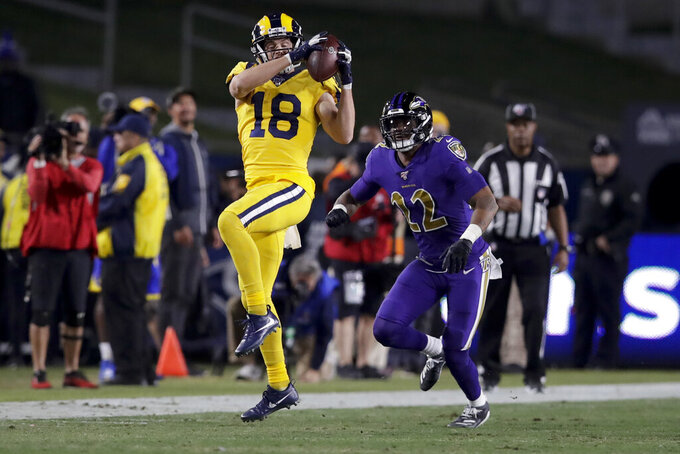 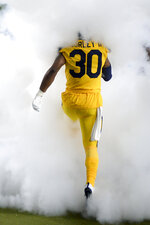 THOUSAND OAKS, Calif. (AP) — The Los Angeles Rams still have a winning record, even if they didn’t look like a winning team at any point in their humiliating 45-6 loss to Baltimore.

Sean McVay's Rams (6-5) still have playoff chances, even if they would need plenty of help — and only if they can somehow recover from their Monday night mauling.

What’s clear to everyone is the team that dazzled the NFL for two seasons is nothing special this year after the Rams stumbled through the worst loss of their coach’s three seasons in charge.

“That was a very, very disappointing night for our whole football team,” McVay said Tuesday. “Everybody can do a better job so that we can avoid feeling like that. The nice thing is that we’ve got a short week, and you can’t dwell on those losses long. You’ve got to look at what we can do a much better job of, which is a lot of things, and then we start preparing for the Arizona Cardinals. We can’t allow the Ravens to beat us twice.”

McVay still hasn’t fixed an offense that just put up a lousy month of performances, scoring just two offensive touchdowns in November and failing to reach the end zone at all in two of the last three games. The defense that was holding the Rams together came apart when faced with Lamar Jackson, although that’s the case with every team in the NFL this season.

The holiday week could feel uncommonly bleak for the Rams at their somber training complex, but their leaders will remind everyone that all is not lost, even after a defeat that felt fairly definitive about their waning dreams of reclaiming their championship form.

“We obviously need some stuff to happen, but I don’t think it’s completely out of the realm of possibility at all,” said Jared Goff, who didn’t throw a touchdown pass in November. “We’re still very much in it, and we’ve just got to keep fighting.”

The Rams still have five games to play, including four against NFC West foes — two against last-place Arizona. Los Angeles is still the first team behind Minnesota (8-3) and Seattle (9-2) in the NFC wild card race, even if the Rams aren’t exactly surging toward the finish.

Yet the few Rams who spoke to the media after the Baltimore debacle expressed confidence in their ability to be an elite NFL team again, even if their recent results suggest nothing of the sort.

“Absolutely, we feel that way,” receiver Brandin Cooks said Tuesday. “Anytime we go into a game, we expect to win. The standards are high, and we’ve got to play to them.”

Almost everything went miserably Monday night, but the Rams’ corps of receivers was back to full strength and performed well when Goff got the ball to them. Robert Woods returned from a one-game absence due to a personal issue and made six catches for 97 yards, while Cooper Kupp had six receptions and tight end Tyler Higbee had five.

It’s difficult to pick on the Rams’ defense because the Ravens are making everybody look incompetent this season, so perhaps the Rams’ inept rushing game deserves the spotlight. Los Angeles ran the ball just nine times and managed only 22 yards — getting 15 of those on a single run by Todd Gurley. The Rams are down to 24th in the NFL with just 90.7 yards per game on the ground. They finished third in the league last season with 139.4 yards per game, and they were eighth in McVay’s 2017 debut season with 122.1 yards per game.

Although Goff was sacked twice, his offensive line consistently provided enough time to throw. The group with three inexperienced starters and a fourth playing a new position has performed fairly creditably in difficult circumstances — but it’s still not good enough, considering how the running game struggled again. The line still seems to be Los Angeles’ greatest area of concern and necessary upgrade in the offseason.

The Ravens concentrated on double-teaming Aaron Donald, and the two-time Defensive Player of the Year had just one tackle all night. Donald’s ineffectiveness also reflects on his teammates’ inability to exploit advantages out of Donald’s double teams, but the Rams would love more dominant play for $87 million guaranteed.

The Rams emerged with no significant new injuries, although tight end Gerald Everett might be limited in practice with a minor knee injury. Right tackle Rob Havenstein is making progress in his return from a two-game absence with a knee injury, and he will start Sunday if he is healthy, McVay said.

18th: Gurley’s rank among the NFL’s rushing leaders with his 547 yards on the ground. He was third last season (1,251) and second in 2017 (1,305). He needs 338 yards over the final five games to avoid the least productive season of his five-year NFL career. The Rams continue to insist he is healthy.

The NFC West slate begins with a trip to Arizona (3-7-1) on Sunday for the first of two meetings with the Cardinals in December. Kyler Murray presents similar problems to Jackson, but the Cardinals have allowed at least 21 points to every opponent this season. The Rams need to beat inferior teams to have any hope of capitalizing if the Seahawks or Vikings stumble.