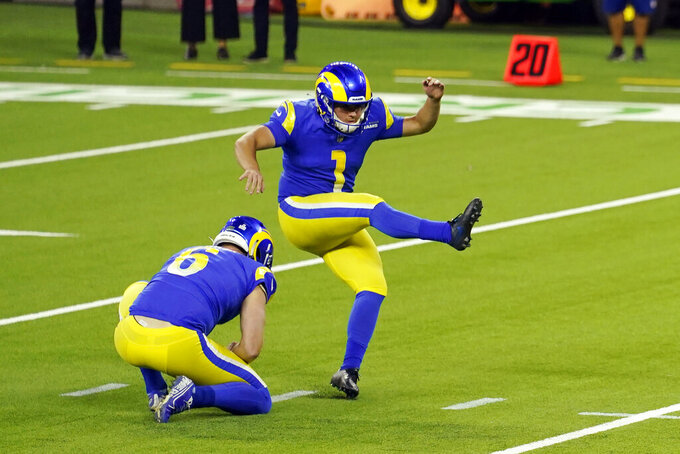 FILE - In this Monday, Oct. 26, 2020, file photo, Los Angeles Rams kicker Samuel Sloman (1) makes a field goal against the Chicago Bears during the first half of an NFL football game in Inglewood, Calif. The Rams have released rookie kicker Samuel Sloman after seven games with the team. The Rams (5-2) dropped their seventh-round pick on Tuesday, after he had a field goal attempt blocked in their 24-10 win over Chicago on Monday night.(AP Photo/Ashley Landis, File)

The Rams (5-2) dropped their seventh-round pick on Tuesday after he had a field-goal attempt blocked in their 24-10 win over Chicago on Monday night.

Veteran NFL kicker Kai Forbath is expected to take over for Sloman. The Rams signed Forbath last week off the Bears' practice squad.

Sloman won a three-way competition for the job in training camp, but his first NFL job had been rocky ever since he missed a 29-yard field-goal attempt in the Rams' season opener against Dallas.

He missed three extra-point attempts for Los Angeles, and he missed three of his 11 field-goal attempts, with two being blocked. He also struggled to get enough distance on kickoffs.

“It’s a tough situation as a rookie to come in and have some of the pressure that that kicking position entails,” coach Sean McVay said Tuesday. “In a lot of instances, you go through some things, and then you end up getting a chance (with another team) down the road. That's the hope that I have for Sam. Those are never fun conversations, but I think he understood that we needed to produce at a higher level.”

Sloman was the replacement for Greg Zuerlein, who was among the NFL's top kickers for much of his eight-year tenure with the Rams. Zuerlein left Los Angeles in the offseason along with longtime special teams coordinator John Fassel to join the Cowboys.

The Rams signed Forbath a week ago after Sloman missed his third extra point, but gave Sloman one last chance against the Bears because Forbath didn't clear COVID-19 protocols until Sunday. Sloman made a 22-yard field goal, but his 48-yard attempt against Chicago was low and easily blocked.

Forbath is a Los Angeles-area native who played at Sherman Oaks Notre Dame High School and UCLA. He kicked for six teams in his first eight seasons in the NFL.

Forbath was Washington's kicker for four seasons while McVay was an assistant with the team. Forbath finished last season by making all 10 of his field-goal attempts for Dallas, but was still released in favor of Zuerlein in August.

“I've been with Kai in Washington, and he's pretty accurate inside the 50-yard range,” McVay said. “He's got experience, and I think that's important. The game's not too big for him, and I think he'll bring stability to that spot, and hopefully some more consistent production that we haven't had this year.”

MacGinnis, a Kentucky product who kicked in the XFL, lost the Rams’ training camp competition with Slovis and Lirim Hajrullahu, but still made a strong impression on Los Angeles.

“It was really closely contested between those three guys,” McVay said. “(MacGinnis) gets great height immediately on his kicks.”